Kani was waiting for her parents to return from work. She was eager to talk to her parents about her day at school. Suddenly, Teddy, the dog ran to the gate with his favorite pillow.

Kani was waiting for her parents to return from work. She was eager to talk to her parents about her day at school. Suddenly, Teddy, the dog ran to the gate with his favorite pillow.

“Teddy, where are you running?” asked Kani. 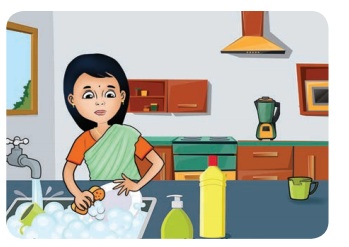 Kani ran after Teddy to see where he was going. Kani’s parents were at the gate. Teddy was so happy to see them and he took his pillow as a sign of welcoming them. Teddy would not stop wagging his tail and followed them until they pet him. Kani didn’t wait for a moment and started talking about her day to her parents.

It was a Saturday morning. At 9 AM, while Kani was painting, Teddy again ran to the gate with his pillow.

“Teddy, parents are here and where are you running again?” asked Kani.

Kani again ran after him. This time it was Selvi, the house helper at the gate. Teddy would not stop wagging his tail and followed her until she pet him. Selvi then started cleaning the house and every time she walked near Teddy, he would wag his tail. Kani walked into the kitchen where Selvi was cleaning the vessels. Near the kitchen sink, Kani saw an old, cracked cup with coffee in it. After finishing all the work at home, Selvi drank the coffee. 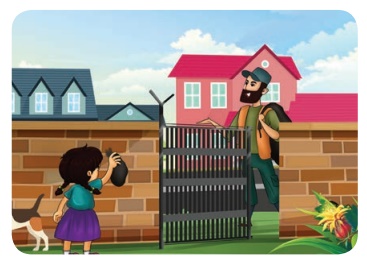 At around 12 PM, while Kani and Teddy were in the garden, she heared someone whistling.Teddy again ran to the gate with his pillow.

“Teddy, Selvi akka left an hour ago and where are you running again?” asked Kani.

Kani again ran after him. This time it was Muthu. Muthu collects garbage from every house. Teddy would not stop wagging his tail until Muthu pet him. Kani ran to the kitchen to pick up the garbage bag.

“Kani, will you eat these sweets? There are only two left and it is getting old.” asked Kani’s mom. 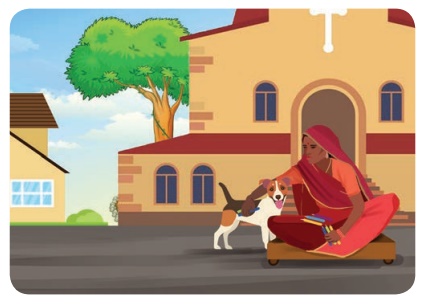 “There is also some leftover rice from yesterday. I will pack both the sweets and rice. We can give it to Muthu,” said Kani’s mom.

Kani drops off the garbage and gave Muthu the leftover food.

“We are having guests at home, Kani”, said her mom.

“Who is coming?” asked Kani.

“Rani aunty and her 2-year-old son Anbu are coming from America,” replied her mom.

“I am very excited to play with Anbu. At what time are they coming?”

“Around 5 PM” replied her mom.

“Before they come home, you take Teddy for a walk. Ok?” said Kani’s father.

After a few hours of nap, Kani parents started preparing dinner for Rani aunty. Kani’s mom took the new dinner plates, cups and spoons from the cupboard and cleans them.

Kani took Teddy out for a walk. While crossing a provision store at the end of the street, Teddy suddenly started running.

“Teddy, why are you running again?” asked Kani.

Kani ran with Teddy while holding his leash very tightly.

This time it was Amar, the provision shop owner who was standing outside the shop. Teddy ran to him and would not stop wagging his tail until Amar pet him. There was a dog lying outside the shop. Kani remembered how some people would throw stones at this dog. While she was thinking about it, Teddy started playing with that dog. Kani pet the other dog.

After a few minutes, Teddy and Kani started walking into the next street.

“Oh no.Teddy, not again. Why are you running again? Who was it now?”, said Kani.

This time it was Mary. She was a differently abled person who sells candles outside a church. Teddy ran to her and would not stop wagging his tail until she pet him. They continued walking. Teddy and Kani finally reached home and were ready to welcome guests. Kani’s family had a great time with Rani aunty and her son. After a long day, they all went to sleep.

Kani was sleeping and suddenly saw flashes of the broken coffee cup, leftover food, the street dog getting hit by stones in her dream. Kani woke up very disturbed. She looked around. She drank water and went back to sleep. After a while, Kani saw flashes of Teddy playing with Mary, Muthu and Anbu. Kani woke up again but this time with tears filled in her eyes. She realized how Teddy was compassionate and how he loved everyone equally. At that moment, Kani decided that she will also treat everyone equally with love and respect. She hugged Teddy and kissed him. Teddy wagged his tail and both went back to sleep. 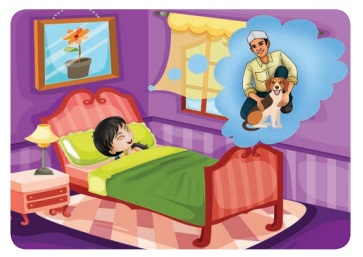 Kani narrated the entire dream to her parents. Kani parents didn’t say a word and remained very quiet. The same day at 9 am, Teddy ran to the gate with his pillow. It was Selvi again. Selvi started doing her routine of cleaning dishes. Kani walked into the kitchen to see a new coffee cup on the counter. Kani smiled and walked back to the room with a renewed hope.

differently abled : a person who is physically disabled