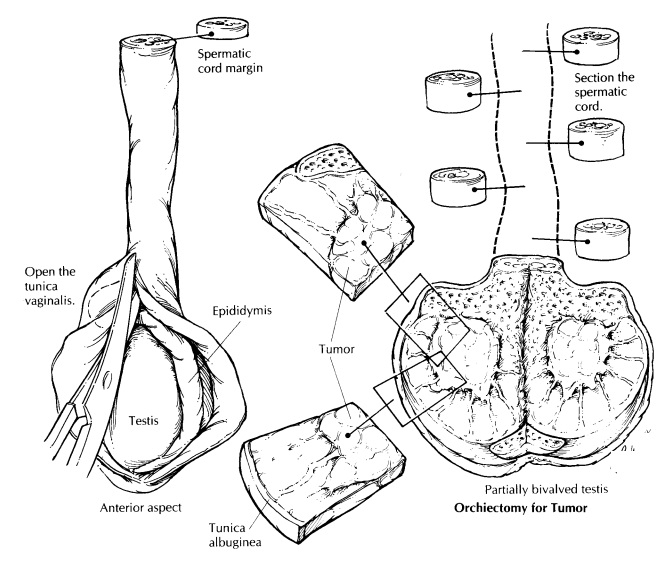 The most important thing to remember when processing a testicular biopsy is to treat it gently.

The most important thing to remember when processing a testicular biopsy is to treat it gently. The delicate sponge-like consistency of the testic-ular parenchyma makes it particularly suscepti-ble to desiccation and compression. Be sure that the tissue remains in fixative during transporta-tion and processing. Bouin’s solution is a better fixative for these biopsies than is formalin. Take care not to crush the tissue when transferring the specimen to the tissue cassette. Do not use forceps; instead, gently filter the specimen into tissue paper. The entire specimen should be em-bedded and sectioned at multiple levels.

The tunica albuginea is the thick fibrous cap-sule of the testis. Keep in mind that this resilient covering makes for an effective barrier to the dif-fusion of formalin and an equally formidable bar-rier to a dull knife. The testis should therefore be sectioned with a sharp knife before it is placed in fixative. As illustrated, partially bisect the testis along its long axis. Begin the cut along the ante-rior surface (the side opposite the epididymis), and extend the section into the mediastinum testis. The testis can now be opened much like a book, with the epididymis serving as the book-binding. This initial section will optimize your ability to assess the relationship between any focal lesions and the testicular parenchyma, the tunica albuginea, and the epididymis. Further-more, this section will allow formalin to penetrate and fix the testicular parenchyma. After making the initial section, photograph the specimen and collect tissue for special studies as indicated. A frozen section or touch preparation from the surface of the lesion may be used to determineif tissue needs to be sent for microbiologic stud-ies, for a lymphoma workup, or for electron microscopy. 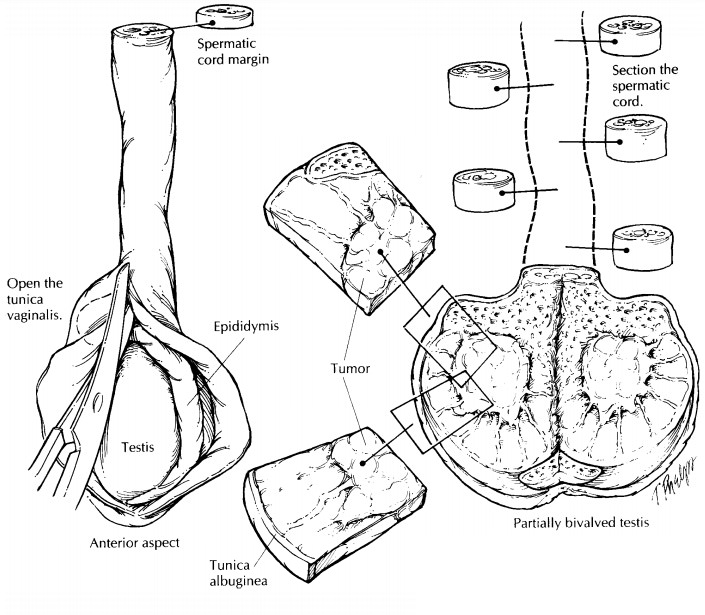 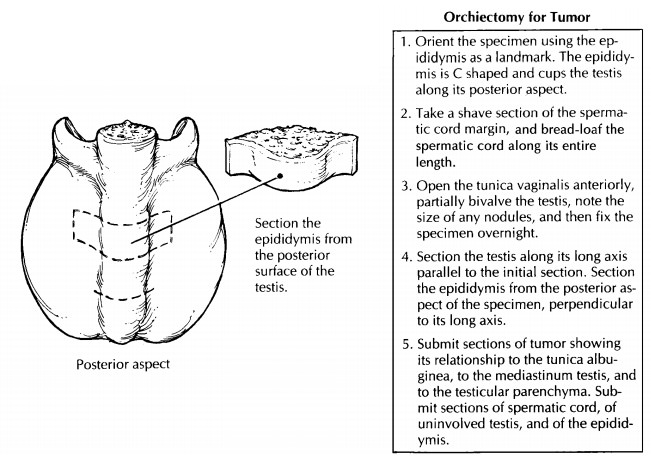 After the specimen is well fixed, it can be thinly sectioned at 3-mm intervals. Bread-loaf the testis along its long axis parallel to the initial section. The epididymis should be sectioned from its head to its tail at right angles to its long axis. As illustrated, this is best accomplished from the posterior aspect of the specimen. If you have not already done so, serially section the remain-ing cord at regular intervals along its entire length.

Carefully examine the cut surface of the testis and paratesticular tissues. Give a detailed de-scription of the appearance of any lesions, and try to determine their location in the testis or paratestis (e.g., central, inferior pole, superior pole, testicular hilum, epididymis, paratesticu-lar soft tissue, spermatic cord). When describing the appearance of a testicular mass, be sure to note its size and areas of hemorrhage and/or necrosis, even if these areas appear small and inconsequential. Try to determine if the tumor is confined to the testicular parenchyma, or if there is extratesticular extension, either beyond the tunica albuginea or into the epididymis. If a testicular neoplasm is clinically suspected, but one cannot be found on gross inspection, do not give up. Instead, scrupulously inspect the thin sections for any scars or areas of gritty calci-fication. These findings may represent regressive changes in a pre-existing neoplasm.

The standard sections to be submitted from any orchiectomy specimen include: (1) sections of tumor showing its relationship to the tunica albuginea and to the mediastinum testis; (2) sec-tions of the testicular parenchyma; (3) sections of the epididymis; (4) sections of the spermatic cord margin; and (5) sections from three levels of the spermatic cord (i.e., proximal, mid, and distal). The number of sections that should be submitted is highly dependent on the clinical setting. Some of the more common reasons for which the testis is resected are cited below, along with some guidelines to keep in mind when sampling these specimens.

Primary testicular neoplasms often exhibit more than one morphologic component (e.g., seminoma and embryonal carcinoma). Because even the focal presence of an aggressive component may affect the treatment and prognosis, it is critical that all of the components present be demon-strated histologically. When submitting sections of primary testicular neoplasms, aim to be both thorough and selective. To be thorough, submit at least one section of tumor for every 1 cm of its greatest diameter. To be selective, sample the areas of the tumor that appear distinct on gross examination. For example, be sure to submit sections from areas of hemorrhage, necrosis, or mucinous change, even if these areas represent only a minor component of the tumor’s gross appearance. These gross changes often correlate with important histologic features.

Sometimes a primary testicular tumor can re-gress, leaving only a small scar. When a tumor cannot be identified in a testis removed from a patient with a metastatic germ cell tumor, the testis should be entirely submitted for micro-scopic examination.

The undescended testis is vulnerable to torsion, infarction, and most importantly, the develop-ment of germ cell neoplasms. Thus, a testis that is maldescended is often resected even when a tumor is not clinically apparent. Your principal role in the processing of the undescended testis is to determine if a neoplasm is present. Because early neoplastic changes or regressed tumors may not be apparent on gross examination, sample generously all areas of the testis even when a focal lesion is not seen. Just as in the normally positioned testis, an undescended testis removed from a patient with a metastatic germ cell tumor should be entirely submitted if a testicular tumor is not grossly apparent.

The testes removed from patients with metastatic prostatic carcinoma are not necessarily abnormal. Instead, bilateral orchiectomies in these patients are usually done as a therapeutic procedure to remove a source of testosterone. Nonetheless, carefully examine the specimen for a metastasis or an unsuspected primary tumor. If none is found,submit one section of the testicular parenchyma from each testis.

For infectious processes, infarcts, and torsion, be sure to submit sections from both the periphery and the center of any lesions. The duration of testicular torsion and the host response to an in-fectious agent are best evaluated in the viable tissue at the periphery of a lesion. Also, when dealing with inflammatory lesions of the testis, always remember to submit fresh tissue for microbiologic studies.

Sometimes the pathologist is called on to deter-mine the presence and/or type of gonadal tis-sue in a surgical specimen. In these instances, it is of critical importance that the specimen be reviewed and oriented with the surgeon. Label all of the grossly identifiable structures, and photograph the specimen so that the histologic findings can be correlated with the structures identified grossly. Always submit a section for histologic evaluation of each structure identifiedgrossly. When the testis cannot be grossly iden-tified, submit the entire tissue so that it can be evaluated for histologic evidence of testicular regression.

Important Issues to Addressin Your Surgical Pathology Report on Orchiectomies

·  Where does the tumor originate (i.e., testis, epididymis, spermatic cord)?

·  What are the histologic type and grade of the neoplasm? Is intratubular germ cell neoplasia present?

·  Is the tumor limited to the testis? Does the tumor extend into any of the adjacent struc-tures: rete testis, epididymis, spermatic cord, tunica albuginea, or scrotum?

·  Can vascular invasion be identified histolog-ically?

·  If a neoplasm cannot be identified, is there histologic evidence of intratubular germ cell neoplasia, calcification, or scar formation?

·  Does the tumor involve any of the margins?