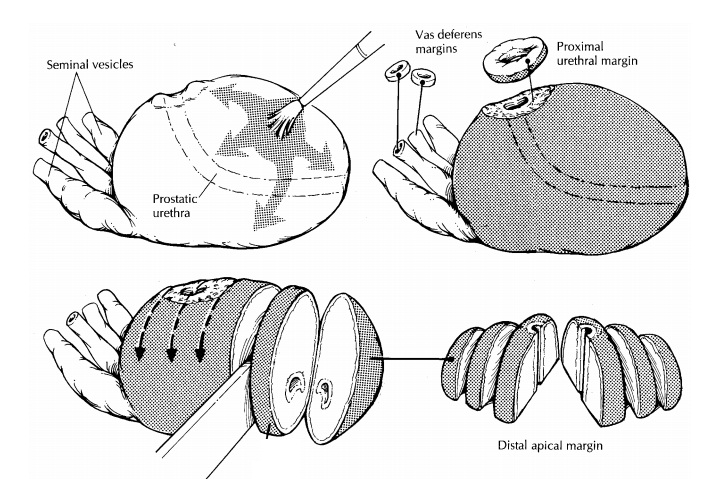 Needle biopsies of the prostate consist of delicate and thin cores of tan soft tissue.

Needle biopsies of the prostate consist of delicate and thin cores of tan soft tissue. Measure each piece of tissue, and document the total number of pieces before carefully transferring them into a tissue cassette. As is true for any small biopsy, do not use forceps to pick up these biopsies, because forceps can squeeze and distort the tissue. Have the histology laboratory section these biopsies at multiple levels, then have them stain alternating levels for routine histology. If sections are later needed for additional studies (e.g., immunoperoxidase), the unstained slides will be readily available, and diagnostic material will not be lost during sectioning of the tissue block.

Frequently, the central region of the prostate is removed—either by transurethral resection or by open enucleation—to relieve symptoms of uri-nary obstruction caused by nodules compressing the prostatic urethra. Although the majority of these nodules are entirely benign, a small, yet significant percentage (i.e., 10%) harbor a carci-noma.

Tissue fragments obtained from transurethral resections of the prostate—referred to as prostatechips—are generally tan, rubbery, and cylindrical.The total number of chips resected varies greatly from case to case. Measure the combined weightof the chips, and record their aggregate dimen-sions. For larger specimens, it is not practical to submit all of the chips for histologic evaluation. Although six to eight tissue cassettes are gener-ally sufficient to detect the vast majority of inci-dental carcinomas, the sensitivity of sampling can be increased by selectively submitting those chips that appear yellow, indurated, or in any other way grossly suspicious for carcinoma. More extensive sampling is warranted in specimens from younger patients, since even a small focus of carcinoma in these men may require aggressive therapy. For patients under the age of 65, consider submitting the entire specimen for histologic evaluation. Similarly, if cancer is identified histo-logically in a specimen that was partially submit-ted, the entire specimen should be submitted so that the approximate volume of the cancer can be calculated. 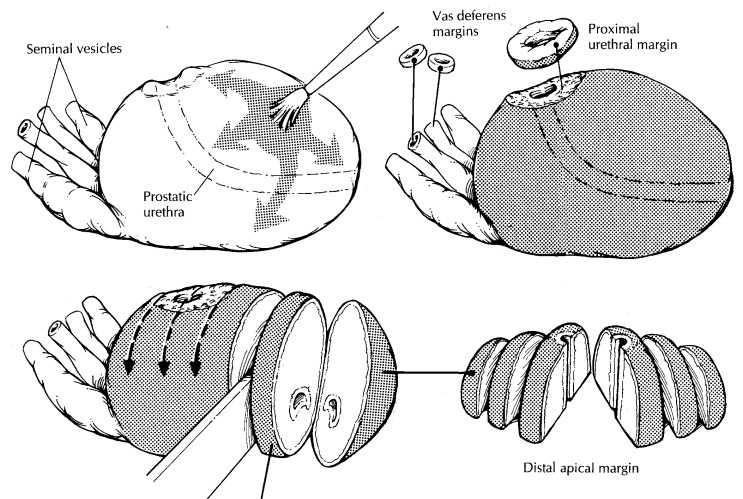 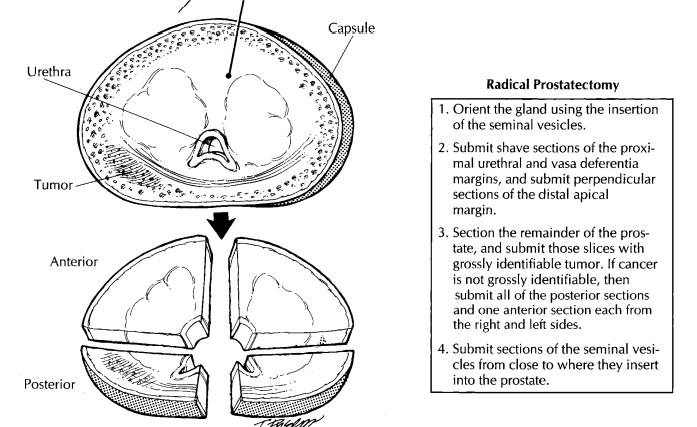 Specimens obtained by open enucleation are either partially or totally intact nodules, but the anatomic orientation of these nodules is usually not practical or possible. After weighing and mea-suring the tissue, serially section the specimen at 2- to 3-mm intervals. Note the appearance of the cut surface. Again, extensively sample the specimen to detect incidental carcinomas. Submit up to six to eight cassettes of tissue. As was true for the prostate chips, remember to selectively sample areas that appear grossly suspicious for carcinoma.

One of the challenges of the dissection of radical prostatectomies is to find a balance which willmaximize prognostic information while mini-mizing the number of tissue cassettes submitted. Selective sampling of a carcinoma of the prostate can be difficult because subtle differences in the gross appearance of cancer and non-neo-plastic prostate tissue can be hard to recognize. This is why it is so important that you familiarize yourself with the subtleties of the gross appearance of prostate cancer. A number of the gross features of prostate cancer are outlined in Table 31-1 and can be helpful in distinguishing carcinoma from non-neoplastic tissue. 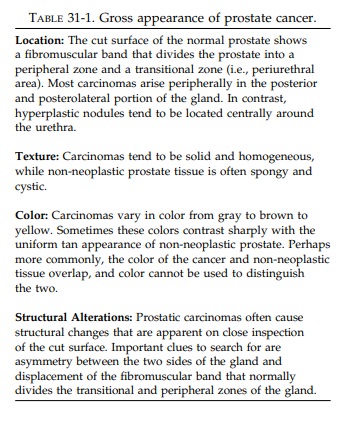 Relatively recent fixation protocols that utilize microwave fixation, such as that described by Ruijter and coworkers,16 have significantly reduced fixation times. Indeed, radical prostatectomy specimens can now be fixed and sectioned on the same day as the surgery.

Following fixation, thinly shave the vasa defer-entia and the proximal (bladder neck) margins. The distal (apical) margin can be submitted in one of two ways. One method is to submit this margin as a thinly shaved section. A second method is illustrated. Amputate the distal 1 cm of the apex, then section this apical cone at right angles to the cut edge in thin parallel slices. The latter tech-nique allows for a more accurate assessment of exactly how close the cancer approaches the distal (apical) margin. If the proximal (bladder neck) and distal (apical) margins are taken as shave sections, these sections should be very thin (1 mm in thickness). A common misunderstanding among pathologists is that these sections are taken to assess the status of the prostatic urethral margins. They are not. These sections are taken to sample the bladder neck margin. Once transected during surgery, the urethra retracts into the gland. Thus there is no need to obtain urothelium on these margin sections, and you should avoid the tendency to submit thick doughnut-shaped sections with urothelium in the center. The semi-nal vesicles are evaluated by taking a section through the base of the seminal vesicle where it joins the prostate. It is not necessary to submit entire tips of the seminal vesicles.

After the margins have been taken, serially sec-tion the prostate at 2- to 3-mm intervals from apex to base. Do not use the urethra as a point of reference for these sections, because this structure follows a curved course through the prostate. In-stead, section the prostate perpendicular to the broad flat posterior surface of the gland. The carefully sectioned prostate can be likened to a loaf of sliced bread. Each individual slice should be intact, uniformly thin, and surrounded by a ‘‘crust’’ of prostatic capsule and inked soft tissue. You will come to realize the importance of this crust when you later have to evaluate the histo-logic sections for extraprostatic extension of the tumor.

Lay the individual slices out sequentially from apex (distal) to base (proximal). Be careful to maintain the orientation (i.e., right vs. left, ante-rior vs. posterior) of each slice. Beginning at the apex and proceeding to the base, designateeach slice (e.g., A, B, C). This will enable you to remember the location of each individual slice within the prostate.

Several key landmarks guide the examination of the individual slices. The prostatic urethra is located near the center of each slice. It has a roughly U-shaped appearance on cut section. The arms of the U point to the posterior surface of the gland, and its convexity points to the anterior surface. Find the fibromuscular band of tissue that separates the central/anterior portion of the gland from the horseshoe-shaped peripheral por-tion of the gland. Try to find the cancer using the guidelines outlined in Table 31-1. Describe the appearance of any lesions, carefully noting their location (left or right, anterior or posterior) and size. Because each slice has already been designated, you can precisely indicate in your gross description which of the slices appear involved.

The slices may have to be sectioned further to fit into standard tissue cassettes. A median sec-tion through the urethra will divide the slice into roughly equal right and left sides, and a coronal section through the urethra will, when necessary, further divide the slice into anterior and posterior quadrants. Although it is common practice in many academic centers to submit the entire pros-tate for histologic examination, such processing significantly increases the cost of handling speci-mens and can impose strains on a laboratory’s resources. As a more efficient alternative, these specimens can be partially sampled using pro-tocols that vary depending on the presence or absence of grossly apparent tumor. If you can confidently identify the cancer grossly, submit slices that contain the entire gross lesion. The question arises as to how thoroughly to sample the prostate when the tumor is not grossly visi-ble. We recommend sampling the entire posterior aspect of the prostate along with one anterior sec-tion from the both the right and left sides of the middle of the gland. If one of these mid-gland sections shows significant tumor, go back to the specimen and submit the entire anterior portion of the gland on the side involved.

After the specimen has been appropriately sampled, retain the remaining tissue sections in their original order and orientation in caseadditional sections must be submitted. One simple method is to fasten the slices together with a safety pin or rubber band.

Radical prostatectomies are usually accompanied by a dissection of the pelvic lymph nodes. These dissections are generally submitted by the sur-geon as separate specimens.

Pelvic lymph node dissections consist of vari-able numbers of lymph nodes embedded in fibro-fatty connective tissue. Each lymph node should be submitted for histologic evaluation. Keep in mind that in a small but significant number of cases the metastatic implants are present in adipose tissues (not in the grossly recognized lymph nodes). Based on this finding, we submit all adipose tissue from pelvic lymphadenectomy specimens, at least for cases with biopsy Gleason scores of 7 or higher.

·  Where in the prostate is the bulk of the tumor located? Does it involve both sides of the gland?

·  Does the tumor involve greater than 5% of the tissue resected?

·  Does the tumor extend beyond the prostate (i.e., ‘‘extraprostatic extension’’).

·  Is vascular or perineural invasion identified?

·  Does the tumor infiltrate the seminal vesicles?