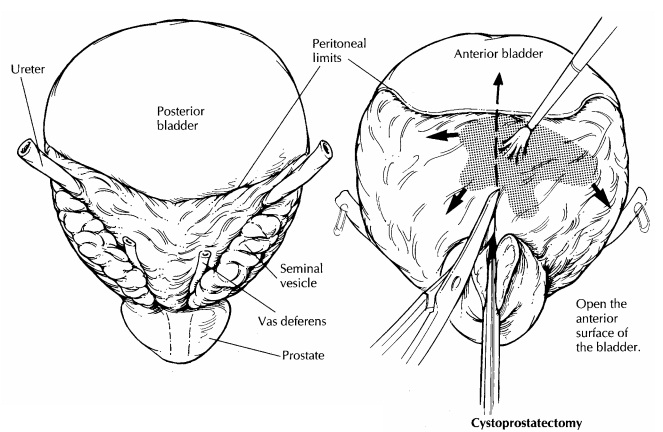 Biopsy specimens of the urinary bladder are generally removed through the cystoscope.

Biopsy specimens of the urinary bladder are generally removed through the cystoscope. They vary from single and minute to numerous, large, and papillary. Orientation of these specimens is generally impossible, even for the larger papillary fragments. Biopsies of neoplasms potentially hold important information regarding tumor type, tumor grade, and extent of tumor invasion into the various layers of the bladder wall.

By following two simple rules, you can avoid missing this crucial information. First, be sure to submit all of the pieces of tissue for processing and multiple sectioning. Second, avoid the common mistake of overfilling specimen cassettes with tissue fragments. Keep in mind that portions of the specimen will not be sampled if they are ‘‘buried’’ within a crowded cassette. In addition, we strongly recommend that the urologist submit superficial and deep tumor biopsies as separate specimens to facilitate the detection of deep muscle invasion.

The processing of resected urinary bladders can be accomplished in three steps: (1) orientation of the specimen and identification of relevant structures (e.g., ureters); (2) fixation of the specimen; and (3) dissection of the specimen. Given the almost spherical shape of the bladder, this first step, orientation, is not necessarily an easy one. The peritoneum covering the surface of the bladder can be used as a reliable, though subtle, anatomic landmark. As illustrated, the peritoneum descends further along the posterior wall of the bladder than it does along the anterior wall. If they are present, other pelvic organs can also be used to orient the specimen. For example, the seminal vesicles and uterus mark the posterior aspect of the bladder. Once the specimen is oriented, locate both ureters and, when present, the vasa deferentia. The best place to look for the ureters is in the lateral perivesicular fatty connective tissues. The ureters are much easier to locate and dissect in the fresh state than they are once the specimen is fixed. Tag the end of each ureter with a safety pin so that you can locate them later.  The next step is to fix the specimen. Some prefer to fix bladders in distention, either through the urethra via a catheter or through the bladder wall using a large-gauge needle. The method we prefer and describe below is to open the bladder and pin it out before submerging it in formalin. The advantage of this latter method is that by exposing the tumor before fixation samples can be collected for ancillary studies requiring fresh tissue. Begin by inking the surface of the perivesicular soft tissues, and then open the anterior bladder wall from the urethra to the bladder dome using scissors. Avoid disrupting the posterior wall, because the ureteral orifices are located in this region, and they will serve as important anatomic landmarks later in the dissection. Examine the mucosa for ulcerations, exophytic tumors, or more subtle mucosal alterations. Note the size, gross morphology (flat, papillary, or ulcerated), and location (e.g., dome, trigone, free walls) of any lesions in the bladder. Photograph the opened specimen. Collect fresh tissue for special studies if warranted. Pin the specimen to a wax block such that the bladder cavity is opened and the luminal surface is fully exposed, and submerge the entire specimen in formalin. 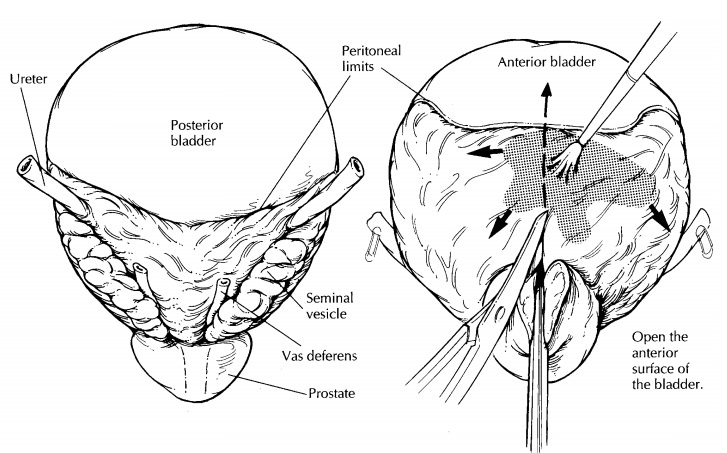 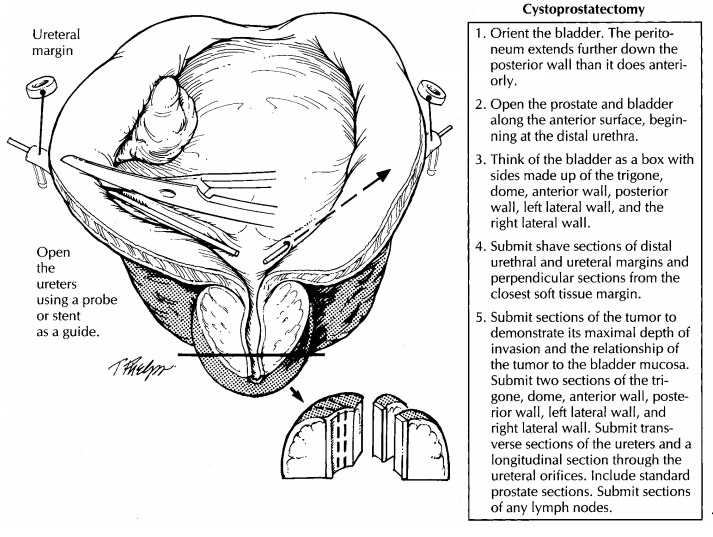 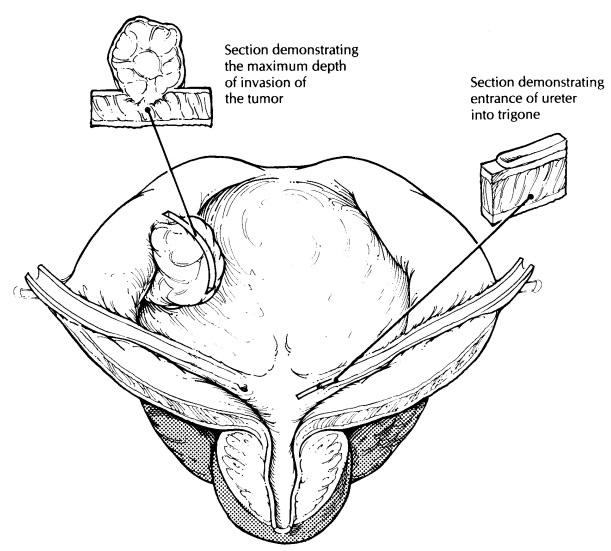 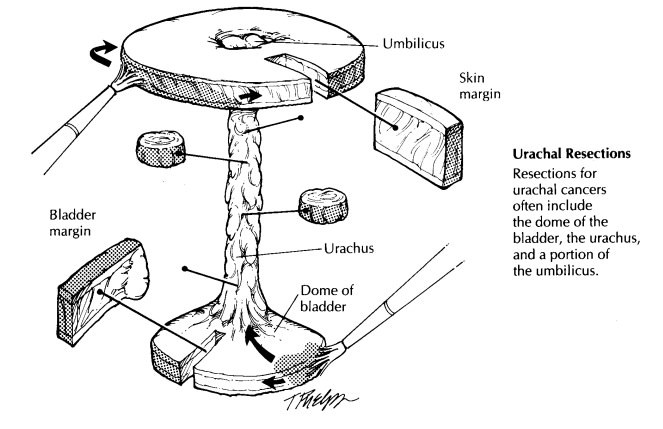 After the specimen is well fixed, resume the dissection by shaving the margins from each of the ureters and (when present) the vasa deferen-tia. These already should have been located and tagged in the fresh specimen. The urethral margin should also be taken as a thin shave sec-tion. When the specimen includes the prostate, amputate the distal 1 cm of the prostate at its apex; then section this apical cone at right angles to the cut edge in thin, parallel sections. These sections will include the distal portion of the prostatic urethra, and will permit you to determine precisely the status of the distal margin at the prostatic apex. Next, using a small pair of scissors, open the ureters on both sides, beginning at their trigone orifices. Look for ureteral strictures and dilatations, and examine the mucosa for ulcerations or exophytic lesions. Document these findings in the gross dictation. Submit transverse sections of the ureters at regular intervals along their entire length.

If a tumor is identified in the bladder, try to determine its depth of invasion. To do this, make a full-thickness cut through the tumor and blad-der wall. See whether the tumor appears to in-filtrate the muscularis propria of the bladder and, if so, whether it extends into the surrounding soft tissues. Take sections of the tumor to demon-strate its relationship to the adjacent urothelium and, importantly, its maximal depth of invasion. Keep in mind that for large exophytic tumors sections will be more informative when they are taken from the base of the tumor than when they are taken from its surface.

Urothelial neoplasms often arise in a back-ground of widespread epithelial alterations. Fur-thermore, many urothelial neoplasms are treated before surgical resection, and residual tumors may not be grossly apparent. For these reasons, it is important that bladders resected for urothelial neoplasia be extensively sampled for histology, even at sites that appear distant from the tumor. As a guide for sampling, treat the bladder as though it were a box with six walls including the floor (trigone), roof (dome), right and left lateral walls, anterior wall, and posterior wall. Submit two sections from each of these, as well as long-itudinal sections through the ureteral orifices on both sides. Selectively sample areas where the mucosa appears abnormal. Carefully inspect

the bladder mucosa because many in situ neo-plasms of the bladder are flat and are charac-terized by a subtle red velvety appearance, in contrast to the tan, smooth appearance of nor-mal mucosa.

Less frequently, only a portion of the bladder is removed as a sheet-like piece of tissue. In gen-eral, these partial cystectomies should be fixed and dissected according to the guidelines given for complete bladder specimens, keeping in mind that orientation of these specimens may not always be possible. Rather than a three-dimensional box, the partial cystectomy can be thought of as a rectangular sheet with four edges. These edges are important, because they repre-sent the surgical margins of the bladder wall. Ink the edges and assess these margins for tumor involvement by taking perpendicular sections from all edges of the rectangle at regular inter-vals. Remember to include mucosa as well as the wall of the bladder in these sections. Sections should also be taken to demonstrate the maxi-mum depth of invasion of the tumor.

A peculiar variation of the partial cystectomy is seen in resections of neoplasms arising from the urachal tract. These specimens consist of the dome of the bladder in continuity with the ura-chal tract up to and including the umbilicus. As illustrated, the bladder portion of the specimen should be routinely processed as you would any ordinary partial cystectomy. As for the urachal tract, first ink the surrounding soft tissue mar-gins, and then serially section through the tract from the bladder to the umbilicus. These sections should be taken at right angles to the long axis of the urachal tract. Submit a number of these cross sections from the urachal tract for histology as well as the standard bladder sections. Remem-ber to sample the two additional margins intro-duced by this resection: the soft tissue margin surrounding the urachus and the skin margin rimming the umbilicus.

Commonly, the bladder is removed in continuity with the prostate, uterus, or other pelvic organs. The added complexity of these specimens intro-duces only minor alterations to the guidelines given above. For cystoprostatectomies, you will again need to open the specimen anteriorly before fixing it; only now begin the incision at the distal prostatic urethra. Using a pair of scissors, open the prostate anteriorly by cutting along the pros-tatic urethra, and continue the incision through the anterior bladder wall all the way to the dome. Try not to disrupt the posterior aspect of the pros-tate with this first longitudinal cut. After the spec-imen has been opened, carefully examine the urethral mucosa for evidence of extension of tumor into the prostatic urethra. Once the speci-men is fixed, serially section the prostate from apex to base at 2- to 3-mm intervals. These sec-tions should be transverse sections through the posterior surface of the gland. Examine the cut surface of the prostate. If a tumor is identified, try to determine if it is arising centrally from the prostatic urethra or if it is more peripherally located, as is common for cancer of the prostate. This observation is important, because the pros-tate should be processed differently

Because the other pelvic organs commonly re-moved with the bladder (e.g., uterus and rectum) are situated posteriorly, use the same anterior approach to open the bladder without altering its relationship to these other organs. Section these additional structures, keeping four objectives in mind: (1) document the presence of these struc-tures; (2) demonstrate the relationship between the tumor and each of these structures; (3) evalu-ate the resection margins for each organ; and

examine the attached pelvic organs for other diseases. For example, when a portion of rec-tum accompanies the bladder specimen, sections should be submitted (1) to document the pres-ence of rectum and any incidental rectal pathologic findings; (2) to demonstrate the relationship between the rectum and the tumor; and (3) to assess the status of the proximal and distal rectal margins.

Important Issues to Address in Your Surgical Pathology Report on Cystectomies

·  What is its pattern of growth? Is it papillary, flat, or ulcerated?

·  Is the neoplasm in situ or infiltrating?

·  What are the size, histologic type, and grade of the neoplasm?

·  Does the tumor extend beyond the bladder into the perivesicular fat, prostate, uterus, vagina, pelvic wall, or abdominal wall?

·  What is the status of each of the margins (the ureters, urethra, soft tissue, etc.)?

·  Is the tumor multifocal or unifocal? Does the tumor involve blood vessels, nerves, or regional lymph nodes? How many lymph nodes were examined, and how many harbor a metastasis?