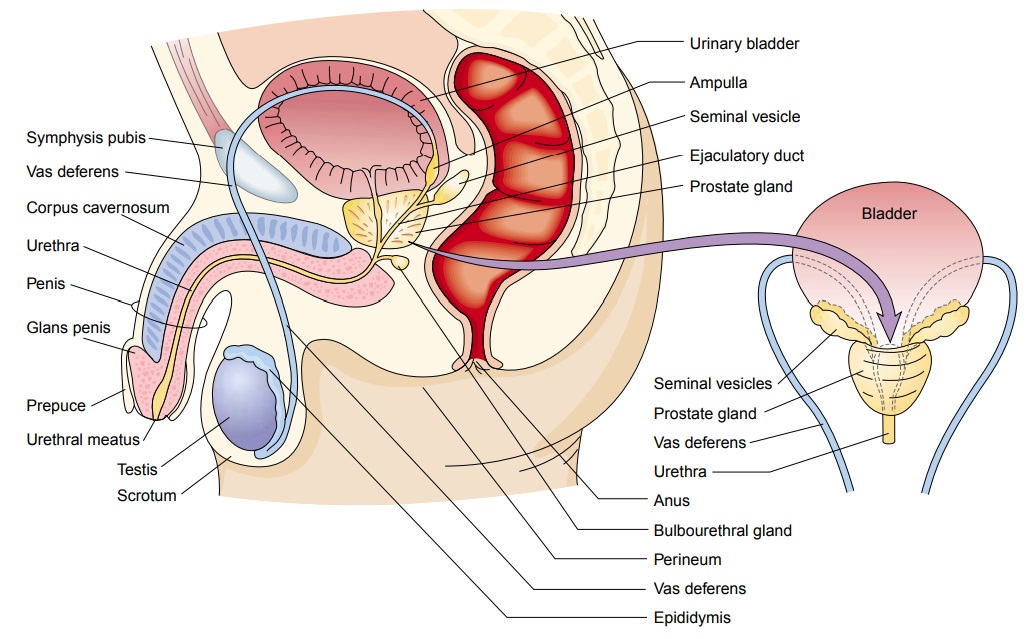 The testes are formed in the embryo within the abdominal cavity near the kidney.

The testes are formed in the embryo within the abdominal cav-ity near the kidney. During the last month of fetal life, they de-scend posterior to the peritoneum and pierce the abdominal wall in the groin. Later, they progress along the inguinal canal into the scrotum. In this descent, they are accompanied by blood vessels, lymphatics, nerves, and ducts, which support the tissue and make up the spermatic cord. This cord extends from the internal in-guinal ring through the abdominal wall and the inguinal canal to the scrotum. As the testes descend into the scrotum, a tubular ex-tension of peritoneum accompanies them. Normally, this tissue is obliterated during fetal development, the only remaining por-tion being that which covers the testes, the tunica vaginalis. (When this peritoneal process is not obliterated but remains open into the abdominal cavity, a potential sac remains into which ab-dominal contents may enter to form an indirect inguinal hernia.)

The testes are encased in the scrotum, which keeps them at a slightly lower temperature than the rest of the body to facilitate spermatogenesis (production of sperm). The testes consist of nu-merous seminiferous tubules in which the spermatozoa form. Collecting tubules transmit the spermatozoa into the epididymis a hoodlike structure lying on the testes and containing winding ducts that lead into the vas deferens.

This firm, tubular structure passes upward through the inguinal canal to enter the abdominal cavity behind the peritoneum. It then extends downward to-ward the base of the bladder. An outpouching from this struc-ture is the seminal vesicle, which acts as a reservoir for testicular secretions. The tract is continued as the ejaculatory duct, which passes through the prostate gland to enter the urethra. Testicu-lar secretions take this pathway when they exit the penis during ejaculation.