Stripping, fertilization and hatching, Smolt production.As the basic techniques of propagating trout and salmon are similar in many respects, this section will focus mainly on the differences.

As the basic techniques of propagating trout and salmon are similar in many respects, this section will focus mainly on the differences. The brood stock for artificial propagation are obtained from natural sources or from farmraised stocks. When the fry or smolts are to be released into open waters, as in the case of Pacific salmons, it is preferable to have brood fish from the rivers or sea. On the other hand, when the fish are to be raised from egg to marketable adults in captivity, selected captive stocks with the desired genetic qualities are more valuable.When necessary, brood fish from natural stocks are also used and, as mentioned earlier, a good percentage (frequently over 70 per cent) of these fish can be used to provide eggs and milt a second time two years later, if necessary. Brood fish are collected before the onset of maturity (before they become grilse) and many stocks reach this stage in one year in the sea. As described, artificial spawning channels are used to supplement natural breeding of Pacific salmon, and it is reported that the best results in ranching are obtained when native stocks are used in hatchery production of fry.

Brood fish can be held in sea or fresh water for stripping, but sea-grown fish are slowly acclimatized if they have to be transferred to fresh water. Mature male salmon can be recognized by their hooked lower jaw. When milt and eggs ooze out on gentle pressure on the belly, the brood fish are suitable for stripping (figs 17.8 and 17.9). Brood fish are often anaesthetized with MS 222 or chlorobutanol (C4H7Cl3O). The dry method is used for fertilization and care is taken to ensure that the eggs and milt do not come into contact with water before they are properly mixed together. As the stripped eggs and milt are sensitive to light, they are kept away from direct sunlight. The average sex ratio for propagation is four to five females to one male. 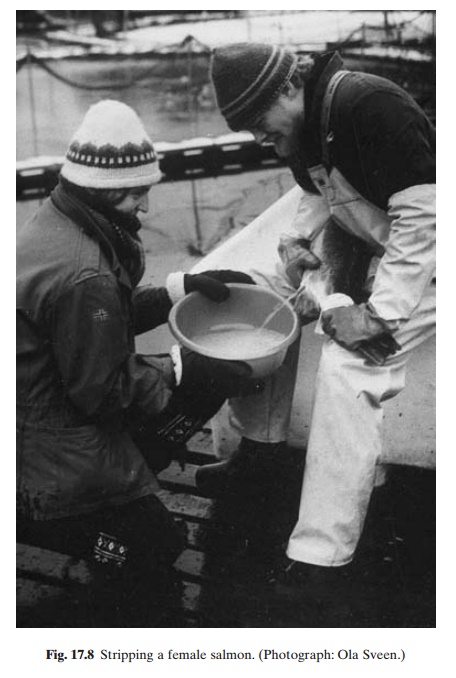 Since Pacific salmons die after spawning, it is not necessary to strip them. The eggs are taken by incision, after killing the female by a blow or using a mechanical device that pierces its head. An incision is made on the side of the fish with a blunttipped knife from behind the pectoral fins and slightly to one side of the median ventral line up to the genital papilla. Eggs start falling into a spawning pan and the body cavity is kept open by hand to let all the ripe eggs come loose. The milt is generally stripped from the males, which may or may not be killed. 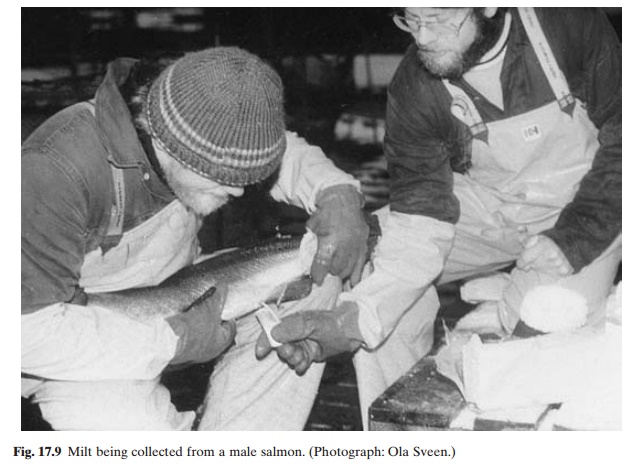 The water-hardened eggs can be transported, if necessary, for incubation at a distant hatchery. If the hatchery is nearby, it is possible to carry the eggs and milt in plastic containers and fertilize there. The trough and battery-type incubators are commonly used. Some enterprises in Norway use a silo-type incubator for hatching large numbers of eggs. This is an upright plastic cylinder containing egg baskets. Water enters from the bottom, flows up past the eggs and leaves at the top of the container. Each silo can hold about 25l eggs and requires only 8l/min water. Since only such a small quantity of water is required it is not expensive to supply heated water for accelerating hatching.

The Atlantic salmon eggs become eyed after about 245 day-degrees, and may hatch after about 510 day-degrees. By controlling the water temperature in the hatchery, the rate of development is manipulated to obtain hatchlings at the most convenient time.

Yolk fry of Atlantic salmon take about 290 day-degrees, that is about four to five weeks at 8°C, to absorb the yolk completely and start taking external food. This is the most critical period, and mortality at this stage is greater in salmon than in rainbow trout. A water temperature of 8–9°C is necessary for salmon fry to start feeding. Fry are reared indoors in fibre-glass tanks holding water to a depth of about 25cm. Often the same tank is used for rearing young salmon throughout their fresh-water life, until they are ready to smolt and acclimatize to sea water.

Salmon fry can be reared in high densities, up to about 10000 fry per m2 tank surface being usual (fig. 17.10). After they start growing, they are thinned out to give more space for growth. The density is regulated to about 25kg/m3 and the fry graded to ensure uniform size in each tank. Water flow in the tank is about 1l/min per kg fish. 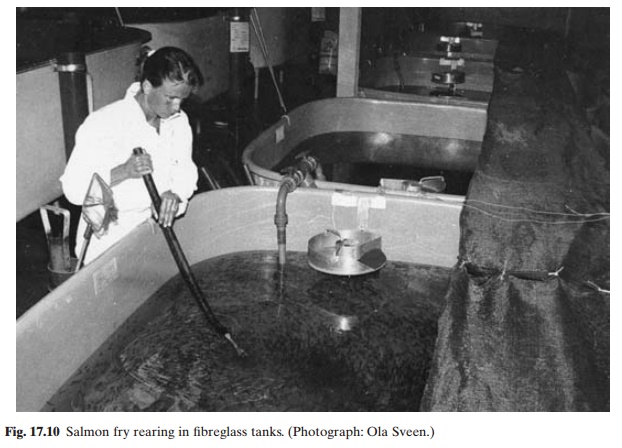 Rearing of fry to smolt stage can be in indoor tanks up to the first summer’s growth. Larger outdoor tanks are also used for this purpose, although not so commonly as for rainbow

trout. There are a wide variety of tanks in use, but many farmers seem to prefer circular or square ones, with circulating water for growing salmon parr. Their size does vary considerably, but large ones may have a diameter of about 10m. While small tanks made of fibreglass are commercially available, larger ones are constructed above ground on the site. A circular tank of 10m diameter and 1m depth can hold about 20000 salmon up to the smolt stage.

The smoltification of Atlantic salmon occurs in spring, when it undergoes physiological pre-adaptation for life in sea water. By the use of water at a higher temperature and with ade-quate feeding and care, many farmers are able to induce 50–80 per cent of the fish to smolt at the age of one year, during the spring of the second year after hatching. The rest smolt when two years old, i.e. during the spring of the third year after hatching. The minimum size for smolting is about 15g, but the desired size at the end of the first year is about 30–50g. Larger-sized smolts are preferred for grow-out and therefore fetch a better price. Because of this, many smolt producers use heated water with recirculation.