Stripping and fertilization, Incubation and rearing of hatchlings, Fry rearing,

The methods of propagation of different species of trout are very similar; in fact the basic procedures are the same for almost all finfishes. Brood fish are removed from brood or holding ponds/tanks for propagation as soon as they are ripe. The dry method of fertilization without admixture of water is most commonly followed. The female brood fish are taken out and wiped gently with a towel to remove all adhering water, after which the eggs are stripped and collected in a dry bowl. Depending on the size of the fish and consequently the quantity of eggs, two to four females may be stripped at a time. Afterwards, the males are stripped and the milt poured over the eggs evenly so as to cover as

For mono-sex culture of females, all-female eggs are produced by fertilizing normal female eggs (XX chromosomes) with milt from sex-reversed masculinized females (XX chromosomes). The mature testes of sex-reversed fish are large and rounded with several lobes, carrying as much milt as a normal male.The testes are removed by cutting open the abdomen, placed in a dry container cooled on ice,and carved criss-cross for the fluid milt to drain out into containers. An equal volume of a standard extension fluid is added. The spermatazoa then become motile, and can be used for fertilizing normal ova. One advantage of the technique is that only the brood stocks are sex-reversed, and they can be grown separately,while the marketed fish are not exposed to any hormonal treatment.

Incubation and rearing of hatchlings

Different types of incubators are used for hatching salmonid eggs, but according to many trout culturists the best is the system of troughs and California ‘baskets’ (fig. 17.6). These have the advantage that the eggs and alevins can be easily observed and the whole process of incubation can be properly monitored. The troughs are usually 40–50cm wide and 20cm deep. The length varies, but a convenient length is about 3–4m. Rectangular baskets are placed in these troughs, with their top edges sitting on the sides of the trough. The perforated bottom of the basket rests about 3cm above the bottom of the trough. The perforations are such that they retain the spherical eggs but allow the hatch-lings or alevins to fall through to the water below. The baskets are arranged in such a way that water will be forced through the mesh to aerate the eggs. The eggs are spread one to two layers thick.Water flows from the top end of the trough, under the basket, and passes up through the perforated base through the eggs and passes to the next basket, until it reaches the end of the trough. An average-sized trough would need a continuous water flow of 5000l/day for every 10000 eggs. 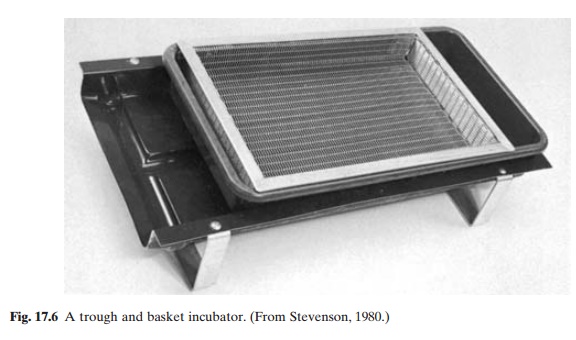 When large numbers of eggs have to be incubated and when there are space limitations in the hatchery, it may be necessary to use battery incubators.

These consist of vertically arranged series of trays held in guides, one below the other. The inner part of the tray, which is similar to the egg basket described above, though generally larger in size, has a perforated base and the eggs are spread on it. Water flows into the outer part of the top tray, under its perforated base and up through the eggs. It passes through the edge of the inner tray or an outlet arrangement to a pipe and into the side of the next tray.The water flow required depends on the size of the system and temperature conditions. Provision is made for a continuous flow of 1l/min per 1500 eggs, although only half of it may be necessary under normal conditions. Dead eggs are removed regularly from the incubators. Some culturists treat the eggs with malachite green twice weekly (3.75g dissolved in 3l water), but others consider it unnecessary if the hatchery has a good-quality water supply and is maintained in sanitary conditions. Chemical baths are believed to affect hatching rates and the condition of the hatchlings.

The time taken for hatching varies mainly with the temperature of the water and ranges roughly between 100 days at 3.9°C and 21 days at 14.4°C. From the ‘eyed’ stage (when the eyes can be seen through the egg shell) until hatch-ing, the eggs are quite tough and can withstand handling and transport. Rainbow trout eggs take about 370 day-degrees (number of days after fertilization multiplied by water temperature (°C) over the period) for hatching. If heated water can be used, the hatching can be speeded up; for example, eggs fertilized in January can be hatched at the end of February or earlier. The hatchlings remain in the hatchery baskets until they reach the swim-up stage and all the yolk has been absorbed. It is advisable to remove the egg shells from the basket with a suction device.

The swim-up fry can be reared in the hatchery tray itself for some days, after removal of the egg baskets. In the case of battery incubators, it is essential to transfer them to a rearing tank.

Indoor concrete or fibreglass tanks are considered most suitable for fry rearing. It is easier to maintain a regular current of water in such tanks and this helps maintain a uniform distribution of the fry. Circular tanks, where fry distribute themselves freely, can carry larger

numbers of fry than traditional long troughs. Both circular and square tanks with rounded corners are in common use for trout and salmon fry rearing. Usually they are 2m in diameter, or 2m x 2m square, with depths of 50–60cm. An elbow pipe delivers the water on the side of the tank, below the water surface, in such a way as to create a water circulation. The drain is in the centre of the tank, with a flat screen leading into a sump below the tank or a vertical cylindrical screen round a central drain pipe. The sump or drainpipe is connected to an elbow pipe on the side under the tank, which can be used to regulate the water level in the tank.

Instead of circular or square tanks, traditional rectangular tanks made of concrete or fibreglass are also in use. Generally they are 3– 4m long, 70–80cm wide and 50–60cm deep. The water flows in at one end and out at the other, through fine-mesh screens. Italian trout farms use a device known as an ‘embrionatori’ for incubating large numbers of eggs. It has a capacity of 40–50l and is supplied with a water flow of 6l/min. It can incubate half a million trout eggs, and hatching is completed in about three weeks at temperatures of 13–14°C.

In modern fish hatcheries, specially prepared starter feeds are given to the fry, using automatic feed dispensers. The quantity of feed and the frequency of feeding are programmed according to the size of the fry and temperature. When they start feeding for the first time, it is customary to feed five or six times a day, and as they grow older feeding is reduced to twice a day. In areas where prepared dry feeds for fry are not available, the farmer may have to fall back on conventional feeds consisting of meat, liver and fish finely ground to a size that can be swallowed by the fry. They are forced through the finest plate of a grinder several times, after all fat, skin and connective tissues have been removed. Some farmers use 1–2 per cent salt to improve the binding quality of the mixture. Unsalted hog liver with up to 50 per cent dry meal makes a suitable mixture.

Mechanical mixers are used to mix the feed ingredients, to achieve the right consistency. The mixed feed is fed to the fish as soon as possible after it is prepared, and distributed over a wide area so that every fry will have the opportunity to feed.

Besides careful feeding, successful rearing involves constant care of the tanks and the fry. Though the period of fry rearing depends on culture requirements, it is normally 10–12 weeks under controlled conditions, so that the fry become immune to infections like whirling disease or myxosomiasis. At the end of the first summer feeding period, the fry are graded and transferred for further rearing to fingerlings and adult fish.