Feeds and feeding of salmonids

Much of our present knowledge of fish nutrition and feed technology is based on work carried out on salmonids.

Feeds and feeding of salmonids

Much of our present knowledge of fish nutrition and feed technology is based on work carried out on salmonids.

Although there are many gaps in the basic information, a sizeable fish feed manufacturing industry has developed as a result of this work and there is an expanding demand for feed in trout and salmon farming, especially in Europe and North America. Manufacturers do make separate feeds for salmon and trout, but experience seems to suggest that they are interchangeable, although salmon diets normally contain a higher percentage of animal protein.

Large-scale farming of trout started in Denmark with the use of trash or industrial fish that was available at low prices as feed. It continues to be used for both trout and salmon farming in Scandinavian countries, even though there is now a greater use of processed commercial feeds. The whole fish or waste left after filleting in processing industries and fish silage are also used. Other fresh feeds, like slaughter-house offals, have been used as feed in small-scale farming in other parts of the world, but such material is not available in sufficient quantities to sustain any large operations.

Species of white (non-oily) fish are preferred as salmonid feed, because fish with a high fat content are more difficult to store and the fat soon becomes rancid. Wet diets prepared with white fish have a low fat and high protein content (approximately 5 per cent fat and over 80 per cent protein, dry weight). It may therefore be necessary to add extra fat to the mixture, so that part of the energy requirements of the fish can be met and more of the proteins become available for growth. When species with somewhat higher fat contents are used, it is not necessary to add extra fat. The most common industrial fish used for salmon and trout feeding in Norway is the capelin (Mallotus villosus). Other fatty fish used are sprats(Clupea) and sand eels (Ammodytes). Fish of the herring family are not used because of the presence of thiaminase which destroys vitamin B1. It is necessary to add thiamin to the diet if the fish are fed with raw herring or a diet containing herring meal.

Although some farmers in Norway feed the fish with whole capelin, the general practice is to mince the fish with a binder to improve the consistency and add vitamin and mineral mixes to ensure that there is no deficiency in the essential trace elements. The protein content of whole fish is generally around 17–18 per cent of the wet weight. The commercially available binding meals, which are mostly carbohydrate, contain 10 per cent or less protein and about 3 per cent fat. Meals containing 35–40 per cent protein are also available commercially for adding to fresh food diets, which contain about 50 per cent animal protein and about 7–10 per cent fat. Some formulations may contain the necessary vitamins and minerals, in which case 5–10 per cent of this meal is added; if not, only about 1 per cent is added to keep the food together and reduce wastage. Shrimp waste is often added to give a distinctive pink colour to the flesh of salmon and trout at the rate of 10 per cent of the diet, which gives a concentration of about 5–6ppm of the pigment astaxanthin in the prepared feed.

Special wet feed dispensers are available, but it is more common to feed cage fish with wet feed by hand (fig. 17.11). If mechanical dispensers are used, the feed should have a smoother consistency, suitable for extrusion through a die. Most farmers feed their fish as often as possible, as they believe that frequent feeding with small quantities, rather than occasional feeding of large quantities, gives better growth rates. However, feeding once or twice a day has been found to be equally satisfactory. Feed dispensers used for wet feeds have been described. A type of feeder especially suited for salmon and trout grown in tanks consists of a canister containing the food mixture travelling on a track over the fish tanks. As it passes over each tank, a piston expels a measured amount from a nozzle. Mobile dispensers have been made from modified slurry tankers from which feed is forced out in a jet by compressed air. Wet feed is also sometimes pumped along pipelines directly to the race-ways or cages in large farm units. Very good wet feed mixtures give conversion ratios of up to 5:1, but poorer qualities give only about 8:1. 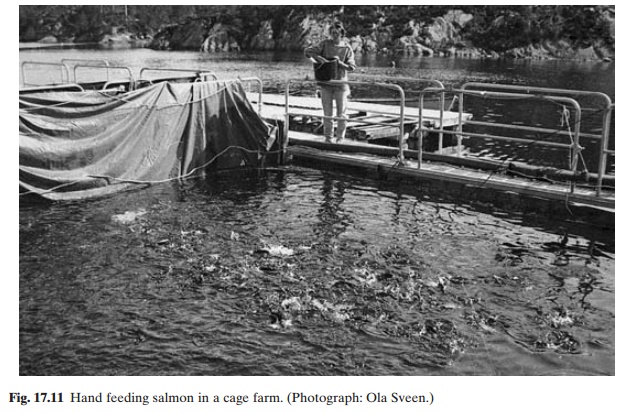 Attempts have been made to reduce the percentage of animal protein in salmonid diet. Soybean meal now forms 10–30 per cent of commercial diets, but the quantity of fish meal is not reduced to less than 20 per cent. A choice of pigmented or unpigmented feed is commercially available in larger pellet sizes. Around 40–60ppm of the artificial carotenoid canthaxanthin or astaxanthin is added to dry feed to give a darker red colour to salmonid flesh.

Pigmented feed is given for only three to six months, depending on temperature, before the fish are harvested for slaughter. Many salmonid farmers prefer to feed their fish with moist pellets that contain 20–50 per cent moisture, as against 12 per cent moisture of dry pellets.

Salmon are usually fed high-energy feeds with high lipid content so the farmers can achieve a better feed conversion, but this ends in high adiposity in fishes, as is also shown in cod. Two groups of juvenile salmon whose body-fat contents were manipulated by feeding diets with differing fat contents – one having high fat content (9.4%) in the body and the other having low fat content (5.6%) – were fed simultaneously with lean (low-fat) and fatty (high-fat) content diets over a period of time. Though both groups preferred to feed on lean diet, the lean fish ate more and in course of time the fat content in the groups converged, approximating the same average body fat content, which suggests that there is a lipostatic regulation of feeding in juvenile salmon, as is also suspected in other fishes (Johansen et al., 2002).