Chapter: Aquaculture Principles and Practices: Design and Construction of Aquafarms

Tanks can be made of concrete, fibreglass, marine plywood, metal or other hard substances.

As will be evident from the preceeding section, pond farms, although comparatively less expen sive to construct and operate, are affected by too many external factors over which the aquaculturist has very little control. Because of this, it is not generally possible to employ a highly intensive technology in pond farm culture. Tank and raceway farms attempt to bring greater human control to operations and facilitate highly intensive farming.

Tanks can be made of concrete, fibreglass, marine plywood, metal or other hard substances (figs 6.17–6.19). Only durable materials that are free from toxic paints or chemicals are used. Fibreglass is a popular material for tank construction as it is light, strong and inert to fresh and salt water. It can be moulded into most desired shapes and is strongest in tension loading, which is usually the stress experienced in circular tank walls. Fibreglass tanks are generally circular in shape. Sectional metal tanks can readily be obtained in the market in many places and can be easily erected or dismantled. Circular tanks are very commonly used for nursery and growout purposes. Besides being easy to assemble and install, the water supply and drainage in such tanks can be organized in such a way as to create a vortex that will sweep most of the detritus and other waste material out of the system. Ready-made plasticcoated metal tank sections can be bought to make tanks of the required size. They are bolted together and sealed with waterproof cement or similar material. The base is screeded in water-proof cement and slopes to a central drain, from which a pipe of suitable size carries discharges to the main drainage pipe; the latter collects discharges from all the tanks and conveys them to the final discharge point. The water level in the tank is controlled by a vertical pipe which is moveable and fitted in the main drain pipe, its height above the base of the tank being thus adjustable. The outflow is usually screened by a vertical, cylindrical plastic or metal mesh of the required size that projects above the water surface. A screened overflow pipe of adequate size is fitted into the upper wall of the tank. In order to protect the stock from predatory birds and other animals, the tanks are covered with suitable netting or metal screens. 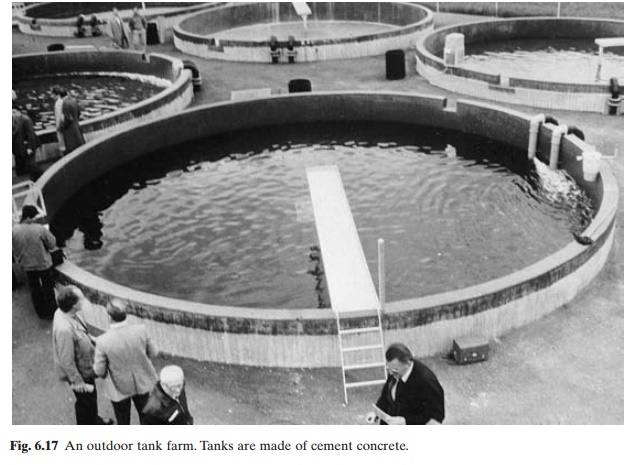 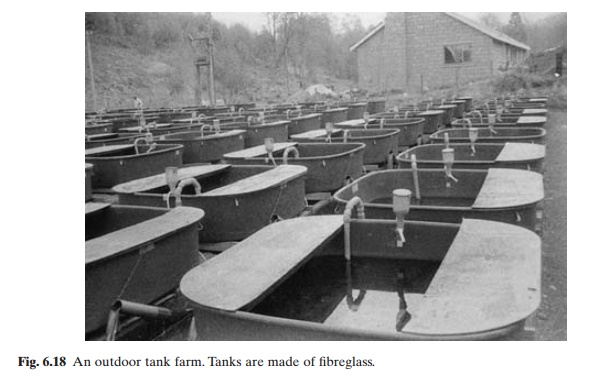 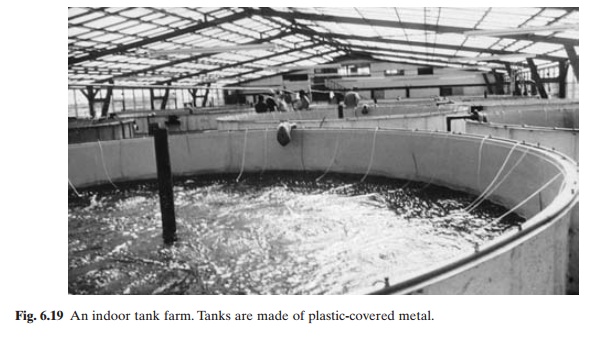 Many variations on the arrangement of the water supply system and protective devices are possible in circular tank farms, including regular aeration and recirculation of water where necessary. Circular cement concrete tanks in Chinese fish-breeding farms have water inlet nozzles arranged on the walls in such a way as to cause a regular circulation in the tanks (fig. 6.20). Circular tanks used for catfish culture in the USA are up to 6 m in diameter and 80 cm deep, with a fall of approximately 5 cm from the circumference to the centre drain, making them easier to clean. In fact they are to some extent self-cleaning. 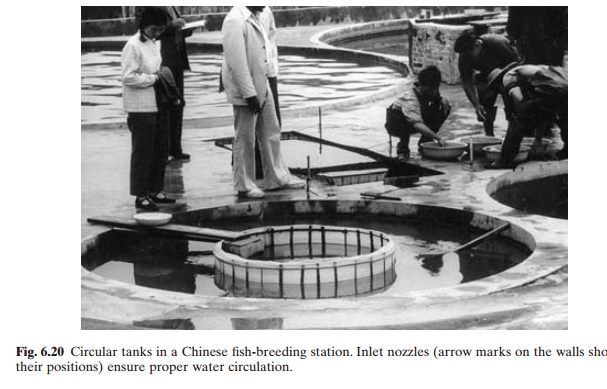 Rectangular tanks are also used and they are approximately 8 m long, 1 m wide and 75 cm deep. The bottom may slope towards one end or towards the middle, to facilitate cleaning and draining (fig. 6.21). In tanks that drain at one end, water enters at the opposite end and flows the length of the tank, whereas in tanks that drain in the middle water enters at each end and flows towards the middle. One advantage of a rectangular tank is that it is easier to harvest fish from it than from a circular tank. Rectangular tanks can be stacked four or five high, in which case they are made slightly smaller, with a length of 4.5–6 m, a width of 1.5–1.8 m and a depth of 40–45 cm. Such systems can be arranged indoors, and it should be possible to install the necessary equipment for controlling water temperature and thus use the tanks for year-round production in colder climates. 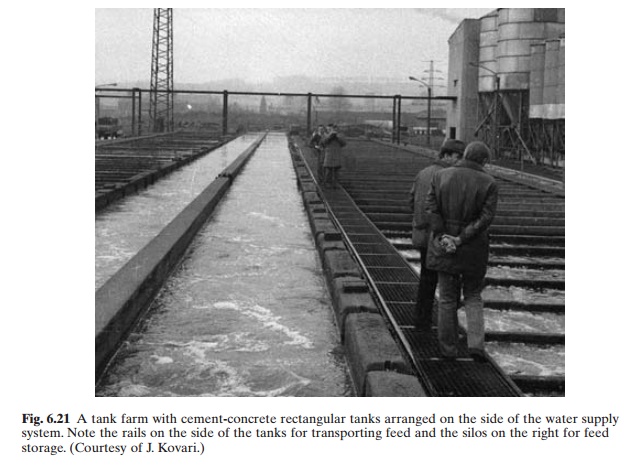 Rectangular tanks are easy to construct, but circulation of water is often characterized by what may be called ‘dead’ areas, where meta-bolic products can build up and cause oxygen depletion. In such tanks, solid waste products can accumulate up at the bottom unless high enough water velocities are maintained to remove them. It is, of course, possible to incorporate suitable designs for better circulation, but maintenance becomes more complex and expensive.

As mentioned earlier, tanks can be built of different materials and in different shapes and sizes. Though not very common, there are large cement concrete tanks 200–300 m2 in area used for rearing salmon, trout, shrimp, etc. In Japan and Taiwan, cement concrete tanks measuring up to 0.2ha are used for eel culture. To enable high density culture, suitable aeration equipment is provided.

A more recent type of facility for aquaculture, in many ways similar to tank farms, is the silo, which has been tried mainly in the USA (fig. 6.22). Essentially it is a deep tank, with water pumped down the centre through a pipe. Water flows upward in the culture tank, outside 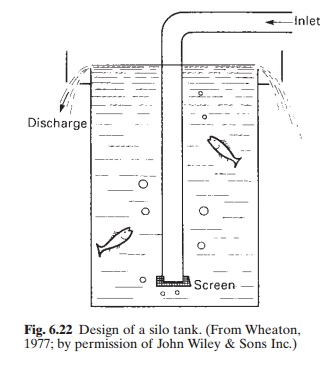 the centre pipe, and discharges into a trough constructed around the outside of the tank at the top. The flow rates are high, but higher densities of fish can be grown in a silo – as much as 136 kg/m3 or 27.5 kg/m3 per second of water flow (Buss et al., 1970).

Traditional             aquaculture         in       ponds         requires the availability of large quantities of water. Approximately 9350 m3 of water per hectare are required to fill the pond and make up for evaporation and seepage during a year. Assuming an annual yield of 5600 kg per ha per year, approximately 3.33 m3 water is required per kg of fish production. In many areas, for example in the United States, traditional aquaculture in ponds is not possible, because of the limited water supplies or shortage of suitable land for pond construction. Recirculating aquaculture production may offer an alternative system of pond aquaculture. Thorough water treatment and reuse of water have been tried to reduce water usage and increase availability of land for aquaculture production. Growing fish in tanks and raceways using environmental control through water treatment and recirculation has been attempted in selected areas (Losardo etal., 2001; Reconditioningand recirculation of water). Although these technologies have proved costly, they are being continued on a medium scale on an experimental basis. Prospective investors need to be aware of the basic technical risks involved in this type of aquaculture.

With high initial capital costs compared to earthen ponds, the carrying capacity of tank systems must also be high to provide for cost-effective fish production. Due to the natural biological capacity of tank-based production, the farmer must rely upon the flow of water through the tanks to wash out the waste products. The oxygen concentration within the tank must be maintained through continuous aeration, either with atmospheric oxygen or pure gaseous oxygen.

Recirculating production technology is most often utilized because sufficient water is not available on a site for fish wastes to be washed out of production tanks. One production tank, if interrupted, can severely limit the production capacity of the system. By recirculating tank water through a water treatment system that ‘removes’ ammonia and other waste products, the same effect is achieved as with the flow-through configuration. The key to a successful recirculating production system is the use of cost-effective water treatment system components. All recirculating production utilizes processes to remove waste solids, oxidize ammonia and nitrite–nitrogen, remove carbon dioxide, and aerate or oxygenate the water before returning it to the fish tank. More intensive systems culturing sensitive species may require additional treatment processes, such as fine solid removal, dissolved organics removal or some form of disinfection process.

The recirculating aquaculture production system has proved to be an alternative to pond culture. When water is inadequate, it is an efficient way to produce large quantities of fish at better feed conversion rates. However, recirculating requires more labour and better skills than pond culture. Electricity at 2.5 kW/ha of ponds is required during summer months for aeration, and recirculation checking, oxygen and upkeep of maintenance during the long hours of nightly labour has also to be taken into account.