Chapter: Aquaculture Principles and Practices: Design and Construction of Aquafarms

Pens and enclosures - Design and Construction of Aquafarms

Pens and enclosures can in some ways be considered as transitional structures between ponds and cages, in so far as environmental and stock control are concerned.

Pens and enclosures can in some ways be considered as transitional structures between ponds and cages, in so far as environmental and stock control are concerned. While enclosures or pens continue to be used in the culture of yellowtail in Japan, milkfish in the Philippines and salmon in Norway, attempts to introduce these systems have not met with much success in many other countries. This can probably be ascribed to the difficulties in the use of intensive techniques and in some cases the rather high costs of embankments and water management, such as through pumping. Experience seems to indicate that the success of enclosures for culture depends to a large extent on the hydrological conditions of the site. The design of the structures and operational procedures have to be based on adequate knowledge of water quality, floods, waves and currents, prevalence of predatory animals, etc.

Probably the simplest and relatively most efficient type of enclosure used for aquaculture is the one formed by damming a bay, cove, fjord or arm of the sea, estuary or river (fig. 6.32). Sites are selected where the barriers can be constructed across narrow sections, or channels, in order to reduce costs and increase the ease of operation. Most of the perimeter of the enclosure is formed by the natural shoreline. 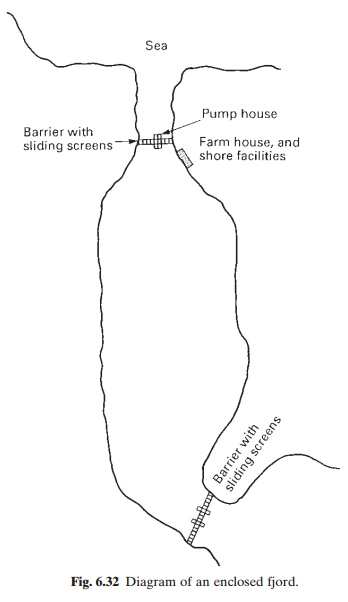 depending on the availability of materials and exposure of the site to storms and other natural disasters. They hold screens consisting of vertical aluminum or galvanized metal bars, with about 1 cm gaps between them to allow free flow of water. The screens, which are removable, can be located in the concrete by moulded guideways. Two guideways are provided, one behind the other for each screen, to enable a duplicate to be placed in position before removal for cleaning. The screens prevent the escape of the fish stock. For proper manage ment these enclosures have to be relatively small (2–7 ha), although there are much larger enclosures in Japan, measuring up to 120 ha or more, which should strictly be called ranches or reserves rather than farms. The depth of water in different portions of the enclosure differs and the circulation of water in the deepest parts may be insufficient to prevent the accumulation of waste and organic matter, giving rise to oxygen depletion in parts of the enclosure. Suction pumps have been used successfully for removing such accumulations and additional flow-through has been created by propellers mounted on floats. Obviously this increases the cost of operation.

Another type of enclosure or pen is the one formed by net barriers to partition off areas of an open water body, such as the intertidal areas of the sea or foreshore areas of lakes and reservoirs. Different designs of enclosures have been constructed. But, generally, the enclosure is formed on one side by the shore and on the other three by a wall of nylon netting hung from poles driven into the sea. In many such enclosures, concrete or stone walls (about 3 m wide) are built on each side where it joins the shore, to provide adequate support for the net. Around the rest of the perimeter, heavy posts of impregnated timber or concrete piles are driven into the bed (by at least about 3 m), extending for about 2 m out of the water at all times (during floods and high tide). Net barriers may be hung from steel cables strung between the poles or the concrete or steel piles. To prevent the lateral movements of these piles some are anchored fore and aft, to large anchor blocks using strong steel cables. The nets are generally made of knotless nylon netting material. In some cases, two walls of netting are used, the outer one to protect the enclosure from floating debris and to prevent the escape of fish if the inner wall gets damaged. However, this has been found to be a hindrance to free flow-through of water and now in most enclosures only one net wall is used. Though not so common as nylon nets, galvanized wire mesh or chain links are also being used as barriers. At the bottom of the poles or pilings under water, the net barrier is fixed by a rope along the sea bed for about 1 m, until it terminates in a lead line. Normally the net embeds itself in the sand or silt at the bottom, forming a good seal. As a

further precaution to prevent escape of fish, heavy rubble may be piled at the bottom of the net or in some cases a net bottom may be provided.

A unique system of pen culture has developed in the shallow eutrophic Laguna de Bay in the Philippines and in lakes in China. Using bamboo scaffolding, enclosures of different sizes have been made in the lakes (fig. 6.33). Because of the shallow nature of the lakes, enclosures can be fairly easily constructed. The average depth of Laguna de Bay at low water is only 3 m and at high water 5 m. The netting is taken above the surface to prevent the escape of fish by jumping (fig. 6.34).An improved floating net enclosure has been developed, where the net enclosure is held in place by concrete block sinkers (about 500 kg in weight), with a series of small weight on the foot rope which is secured to a chain link between the sinkers. The net is kept afloat by floats attached to the head-ropes. There is a horizontal net at the top of the enclosure to prevent fish from jumping. To spread the load exerted by water movement and wave action, a latticework of nylon rope is provided. The enclosures are generally assembled on land, then taken to the site on barges where they are installed by attaching them to the sinkers. Such floating enclosures are now used in lakes for tilapia and milkfish. It is reported that a similar system of pen culture of the giant fresh-water prawn has developed in the Songkhla Lake in Thailand. Several circular pens consisting of a bamboo framework and perlon nets have been built in the fresh-water portion of the lake by small-scale farmers. 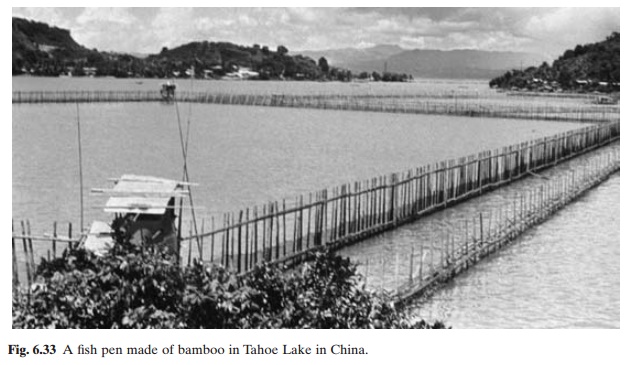 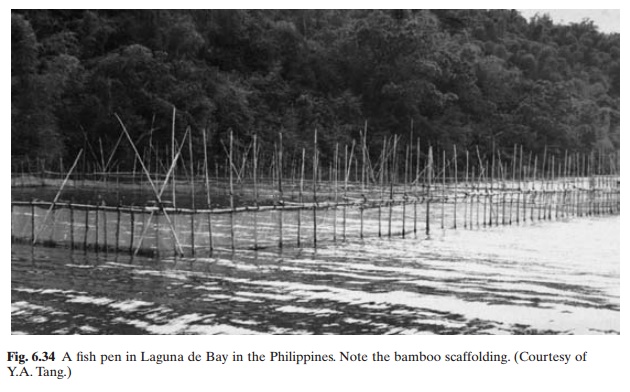