It is effectively a development of the SCR or thyristor, but unlike the thyristor which is only able to conduct in one direction, the TRIAC is a bidirectional device. 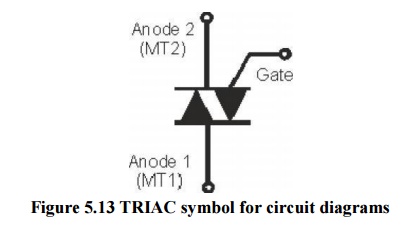 On the TRIAC symbol there are three terminals. These are the Gate and two other terminals are often referred to as an "Anode" or "Main Terminal". As the TRIAC has two of these they are labelled either Anode 1 and Anode 2 or Main Terminal, MT1 and MT2.

The TRIAC is a component that is effectively based on the thyristor. It provides AC switching for electrical systems. Like the thyristor, the TRIACs are used in many electrical switching applications. They find particular use for circuits in light dimmers, etc., where they enable both halves of the AC cycle to be used.

This makes them more efficient in terms of the usage of the power available. While it is possible to use two thyristors back to back, this is not always cost effective for low cost and relatively low power applications.

It is possible to view the operation of a TRIAC in terms of two thyristors placed back to back. 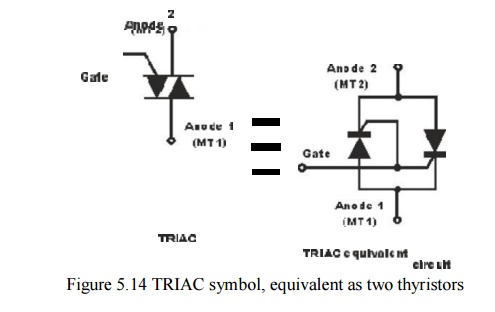 One of the drawbacks of the TRIAC is that it does not switch symmetrically. It will often have an offset, switching at different gate voltages for each half of the cycle. This creates additional harmonics which is not good for EMC performance and also provides an imbalance in the system

In order to improve the switching of the current waveform and ensure it is more symmetrical is to use a device external to the TRIAC to time the triggering pulse. A DIAC placed in series with the gate is the normal method of achieving this.

With switch S open, there will be no gate current and the triac is cut off. Even with no current the triac can be turned on provided the supply voltage becomes equal to the breakover voltage.

When switch S is closed, the gate current starts flowing in the gate circuit. Breakover voltage of triac can be varied by making proper currnt flow. Triac starts to conduct wheather MT2 is positive or negative w.r.t MT1. 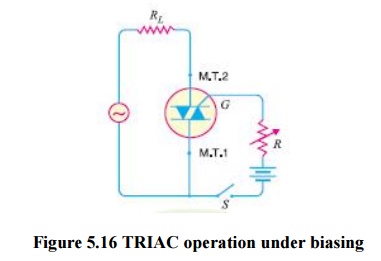 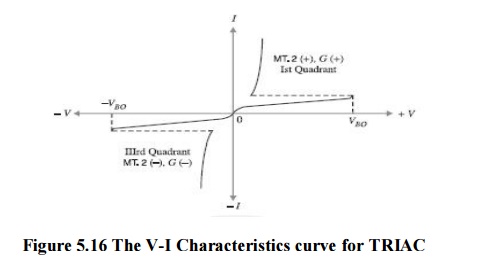 The V-I curve for triac in the Ist and IIIrd quadrants are essentially identical to SCR in the Ist quadrant. The triac can be operated with either positive or negative gate control voltage but in normal operation usually the gate voltage is positive in quadrant I and negative in quadrant III. The supply voltage at which the triac is ON depends upon gate current. The greater gate current and smaller supply voltage at which triac is turned on. This permits to use triac to control a,c. power in a load from zero to full power in a smooth and continuous manner with no loss in the controlling device.

When requiring to switch both halves of an AC waveform there are two options that are normally considered. One is to use a TRIAC, and the other is to use two thyristors connected back to back - one thyristor is used to switch one half of the cycle and the second connected in the reverse direction operates on the other half cycle.As there are two options the advantages and disadvantages of using a TRIAC must be weighed up.

Can switch both halves of an AC waveform

Single component can be used for full AC switching

Care must be taken to ensure the TRIAC turns off fully when used with inductive loads.

However TRIACs are still used for many electrical switching applications: