Biasing: Fixed Bias or Base Bias and Stability of Operating Point

In order for a transistor to amplify, it has to be properly biased. This means forward biasing the base emitter junction and reverse biasing collector base junction.

Fixed Bias or Base Bias:

In order for a transistor to amplify, it has to be properly biased. This means forward biasing the base emitter junction and reverse biasing collector base junction. For linear amplification, the transistor should operate in active region ( If IE increases, IC increases, VCE decreases proportionally). 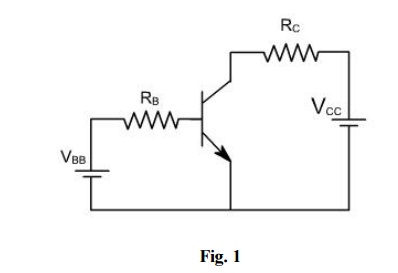 The dc base current through RB is given by

The intersection of this line with input characteristic gives the operating point Q as shown in fig. 2. If an ac signal is connected to the base of the transistor, then variation in VBE is about Q  point. This gives variation in IB and hence IC. 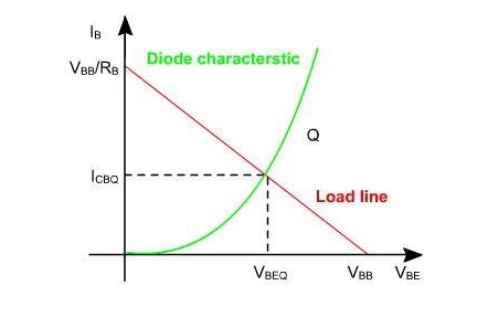 In the output circuit, the load equation can be written as

This equation involves two unknown VCE and IC and therefore can not be solved. To solve this equation output characteristic ( ICvs VCE) is used.

The load equation is the equation of a straight line and given by two points: IC= 0,

The intersection of this line which is also called dc load line and the characteristic gives the operating point Q as shown in fig. 3. 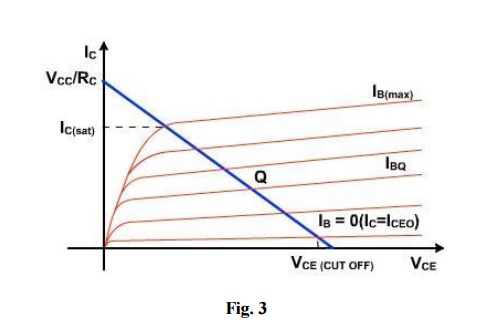 The point at which the load line intersects with IB = 0 characteristic is known as cut off point. At this point base current is zero and collector current is almost negligibly small. At cut off the emitter diode comes out of forward bias and normal transistor action is lost. To a close approximation.

. At this point IB= IB(max), IC= IC(sat). At this point collector diodes comes out of reverse bias and again transistor action is lost. To a close approximation,

If the transistor operates at saturation or cut off points and no where else then it is operating as a switch is shown in fig. 4. 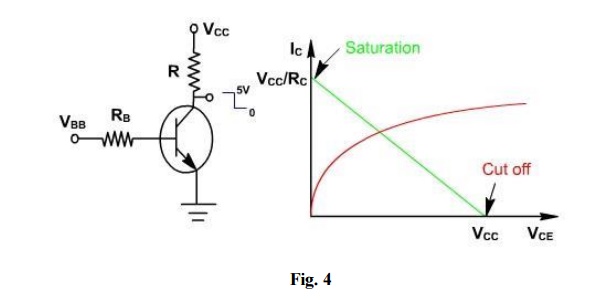 Once the Q point is established an ac input is connected. Due to this the ac source the base current varies. As a result of this collector current and collector voltage also varies and the amplified output is obtained.

If the Q-point is not selected properly then the output waveform will not be exactly the input waveform. i.e. It may be clipped from one side or both sides or it may be distorted one.

If the operating point is selected near the cutoff region, the output is clipped in negative half cycle as shown in fig. 1. 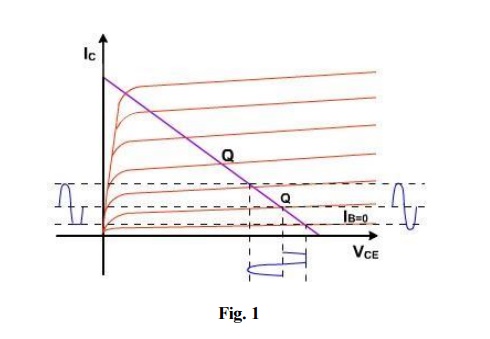 If the operating point is selected near saturation region, then the output is clipped in positive cycle as shown in fig. 2.

If the operating point is selected in the middle of active region, then there is no clipping and the output follows input faithfully as shown in fig. 3. If input is large then clipping at both sides will take place. The first circuit for biasing the transistor is CE configuration is fixed bias.

Now VCC is still forward biasing emitter diode. In this circuit Q point is very unstable. The base resistance RB is selected by noting the required base current IB for operating point Q.

Voltage across base emitter junction is approximately 0.7 V. Since VCC is usually very high

Since IB  is constant therefore it is called fixed bias circuit.