It may be recalled that a D.C. generator can be run as a D.C. motor. In same way, an alternator may operate as a motor by connecting its armature winding to a 3-phase supply.

It may be recalled that a D.C. generator can be run as a D.C. motor. In same way, an alternator may operate as a motor by connecting its armature winding to a 3-phase supply. It is then called a synchronous motor. As the name implies, a synchronous motor runs at synchronous speed (Ns = 120f/P) i.e., in synchronism with the revolving field produced by the 3-phase supply. The speed of rotation is, therefore, tied to the frequency of the source. Since the frequency is fixed, the motor speed stays constant irrespective of the load or voltage of 3- phase supply. However, synchronous motors are not used so much because they run at constant speed (i.e., synchronous speed) but it found very useful applications because they possess other unique electrical properties.

Let assume that the armature winding (laid out in the stator) of a 3-phase synchronous machine is connected to a suitable balanced 3-phase source and the field winding to a D.C source of rated voltage. The current flowing through the field coils will set up stationary magnetic poles of alternate North and South. On the other hand, the 3-phase currents flowing in the armature winding produce a rotating magnetic field rotating at synchronous speed. In other words there will be moving North and South poles established in the stator due to the 3-phase currents i.e at any location in the stator there will be a North pole at some instant of time and it will become a South pole after a time period corresponding to half a cycle. (after a time = 1/2f, where f = frequency of the supply). Assume that the stationary South pole in the rotor is aligned with the North pole in the stator moving in clockwise direction at a particular instant of time, as shown in Figure below. These two poles get attracted and try to maintain this alignment (as per Lenz's law) and hence the rotor pole tries to follow the stator pole as the conditions are suitable for the production of torque in the clockwise direction. However, the rotor cannot move instantaneously due to its mechanical inertia, and so it needs some time to move. In the meantime, the stator pole would quickly (a time duration corresponding to half a cycle) change its polarity and becomes a South pole. So the force of attraction will no longer be present and instead the like poles experience a force of repulsion as shown in Figs. In other words, the conditions are now suitable for the production of torque in the anticlockwise direction. Even this condition will not last longer as the stator pole would again change to North pole after a time of 1/2f. Thus the rotor will experience an alternating force which tries to move it clockwise and anticlockwise at twice the frequency of the supply, i.e. at intervals corresponding to 1/2f seconds. As this duration is quite small compared to the mechanical time constant of the rotor, the rotor cannot respond and move in any direction. The rotor continues to be stationary only. 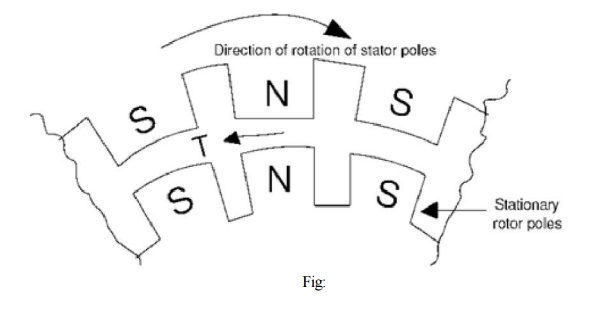 (ii)           a rotor that has a set of salient poles excited by direct current to form alternate N and S poles. The exciting coils are connected in series to two slip rings and direct current is fed into the winding from an external exciter mounted on the rotor shaft. The stator is wound for the same number of poles as the rotor poles. As in the case of an induction motor, the number of poles determines the synchronous

speed of the motor,

f = frequency of supply in Hz P = number of poles

An important drawback of a synchronous motor is that it is not self-starting and auxiliary means have to be used for starting it.

The fact that a synchronous motor has no starting torque can be easily explained.

(i)                Consider a 3-phase synchronous motor having two rotor poles NR and SR. Then the stator will also be wound for two poles NS and SS. The motor has direct voltage applied to the rotor winding and a 3-phase voltage applied to the stator winding. The stator winding produces a rotating field which revolves round the stator at synchronous speed Ns (= 120 f/P). The direct (or zero frequency) current sets up a two-pole field which is stationary so long as the rotor is not turning. Thus, we have a situation in which there exists a pair of revolving armature poles (i.e., NS - SS) and a pair of stationary rotor poles (i.e., NR - SR).

Unlike the induction motor, the synchronous motor is connected to two electrical systems; a d.c. source at the rotor terminals and an a.c. system at the stator terminals.

(ii) The second effect is that a voltage is generated in the stator winding by the synchronously-revolving field of the rotor as shown in Fig: 2.23 (i). This generated e.m.f. Eb is known as back e.m.f. and opposes the stator voltage V. The magnitude of Eb depends upon rotor speed and rotor flux ф per pole. Since rotor speed is constant; the value of Eb depends upon the rotor flux per pole i.e. exciting rotor current If.

Net voltage/phase in stator winding is