The Symmetric Shared Memory Architecture consists of several processors with a single physical memory shared by all processors through a shared bus which is shown below.

The Symmetric Shared Memory Architecture consists of several processors with a single physical memory shared by all processors through a shared bus which is shown below. 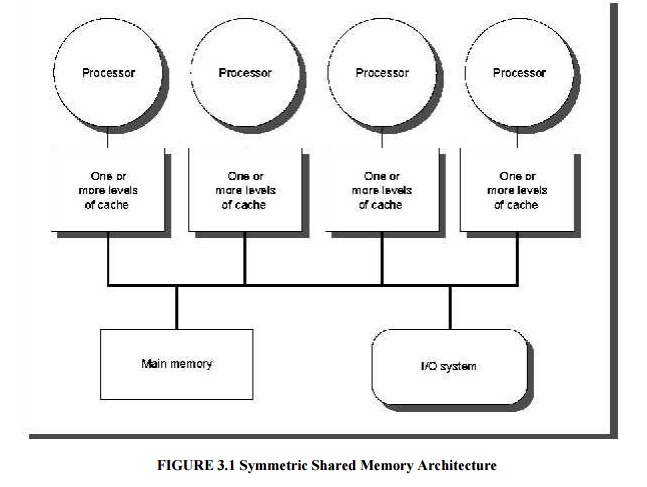 ` Small-scale shared-memory machines usually support the caching of both shared and private data. Private data is used by a single processor, while shared data is used by multiple processors, essentially providing communication among the processors thro ugh reads and writes of the shared data. When a private item is cached, its location is migrated to the cache, reducing the average access time as well as the memory bandwidth required. Since no other processor uses the data, the program behavior is identical to that in a uniprocessor.

Introduction of caches caused a coherence problem for I/O operations, The same problem exists in the case of multiprocessors, because the view of memory held by two different processors is through their individual caches.

The problem and shows how two different processors can have two different values for the same location. This difficulty is generall y referred to as the c a c h e -

We initially assume that neither cache contains the variable and that X has the value 1.We also assume a write-through cache; a write-back cache adds some additional but similar complications.

After the value of X has been written by A, A’s cache and the memory both contain the new value, but B’s cache does not, and if B reads the value of X, it will receive 1!

Informally, we could say that a memory system is coherent if any read of a data item returns the most recently written value of that data item. This simple definition contains two different aspects of memory system behavior, both of which are critical to writing correct shared-memory programs.

A memory system is coherent if

Ø A read by a processor, P, to a location X that follows a write by P to X, with no writes of X by another processor occurring between the write and the read by P, always returns the value written by P.

Ø A read by a processor to location X that follows a write by another processor to X returns the written value if the read and write are sufficiently separated in time and no other writes to X occur between the two accesses.

Coherent caches provide migration, since a data item can be moved to a local cache and used there in a transparent fashion. This migration reduces both the latency to access a shared data item that is allocated remotely and the bandwidth demand on the shared memory.

Coherent caches also provide replication for shared data that is being simultaneously read, since the caches make a copy of the data item in the local cache. Replication reduces both latency of access and contention for a read shared data item.

The protocols to maintain coherence for multiple processors are called cache-coherence protocols. There are two classes of protocols, which use different techniques to track the sharing status, in use:

Directory based—The sharing status of a block of physical memory is kept in just one location, called the directory; we focus on this approach in section 6.5, when we discuss scalable shared-memory architecture.

Snooping—Every cache that has a copy of the data from a block of physical memory also has a copy of the sharing status of the block, and no centralized state is kept. The caches are usually on a shared-memory bus, and all cache controllers monitor or snoop on the bus to determine whether or not they have a copy of a block that is requested on the bus.

The method which ensures that a processor has exclusive access to a data item before i t writes that item. This style of protocol is called a write invalidate protocol because it invalidates other copies on a write. It is by far the most common protocol, both for snooping and for directory schemes. Exclusive access ensures that no other readable or writable copies of an item exist when the write occurs: all other cached copies of the item are invalidated.

Since the write requires exclusive access, any copy held by the reading processor must be invalidated (hence the protocol name). Thus, when the read occurs, it misses in the cache and is forced to fetch a new copy of the data.

For a write, we require that the writing processor have exclusive access, preventing any other processor from being able to write simultaneously.

complete its write, it must obtain a new copy of the data, which must now contain the updated value. Therefore, this protocol enforces write serialization. 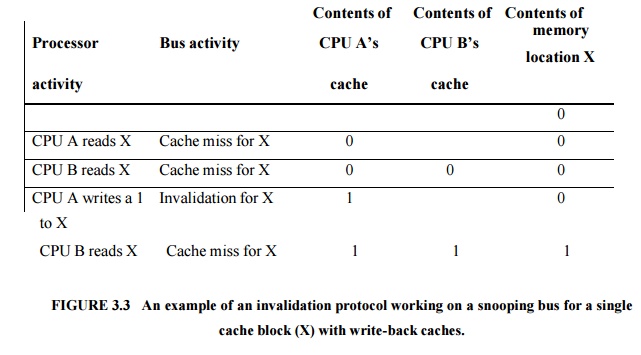 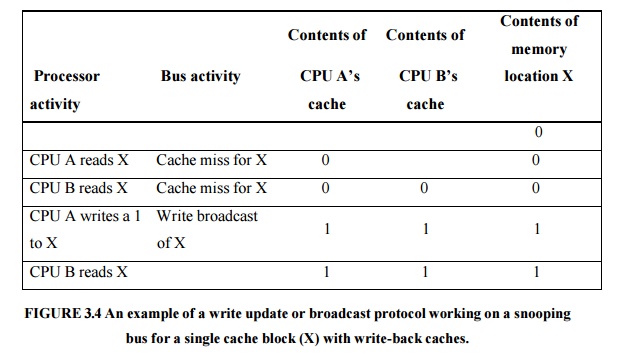 Ø The delay between writing a word in one processor and reading the written value in another processor is usually less in a write update scheme, since the written

Ø data are immediately updated in the reader’s cache

The serialization of access enforced by the bus also forces serialization of writes, since when two processors compete to write to the same location, one must obtain bus access before the other. The first processor to obtain bus access will cause th e other processor’s copy to be invalidated, causing writes to be strictly serialized. One implication of this scheme is that a write to a shared data item cannot complete until it obtains bus access.

For a write-back cache, however, the problem of finding the most recent data value is harder, since the most recent value of a data item can be in a cache rather than in memory. Happily, write-back caches can use the same snooping scheme both for caches misses and for writes: Each processor snoops every address placed on the bus. If a processor finds that it has a dirty copy of the requested cache block, it provides that cache block in response to the read request and causes the memory access to be aborted.

Since write-back caches generate lower requirements for memory bandwidth, they are greatly preferable in a multiprocessor, despite the slight increase in complexity. Therefore, we focus on implementation with write-back caches.

The normal cache tags can be used to implement the process of snooping, and the valid bit for each block makes invalidation easy to implement. Read misses, whether generated by an invalidation or by some other event, are also straightforward since they simply rely on the snooping capability. For writes we’d like to know whether any other copies of the block are cached, because, if there are no other cached copies, then the write need not be placed on the bus in a write-back cache. Not sending the write reduces both the time taken by the write and the required bandwidth.