There are several disadvantages in Symmetric Shared Memory architectures.

Ø Second, without cache coherence, the multiprocessor loses the advantage of being able to fetch and use multiple words in a single cache block for close to the cost of fetching one word.

Ø Third, mechanisms for tolerating latency such as prefetch are more useful when they can fetch multiple words, such as a cache block, and where the fetched data remain coherent; we will examine this advantage in more detail later.

These disadvantages are magnified by the large latency of access to remote memory versus a local cache. For these reasons, cache coherence is an accepted requirement in small-scale multiprocessors.

For larger-scale architectures, there are new challenges to extending the cache-coherent shared-memory model. Although the bus can certainly be replaced with a more scalable interconnection network and we could certainly distribute the memory so that the memory bandwidth could also be scaled, the lack of scalability of the snooping coherence scheme needs to be addressed is known as Distributed Shared Memory architecture.

The first coherence protocol is known as a directory protocol. A directory keeps the state of every block that may be cached. Information in the directory includes which caches have copies of the block, whether it is dirty, and so on.

Figure 3.5 shows how our distributed-memory multiprocessor looks with the directories

Added to each node. 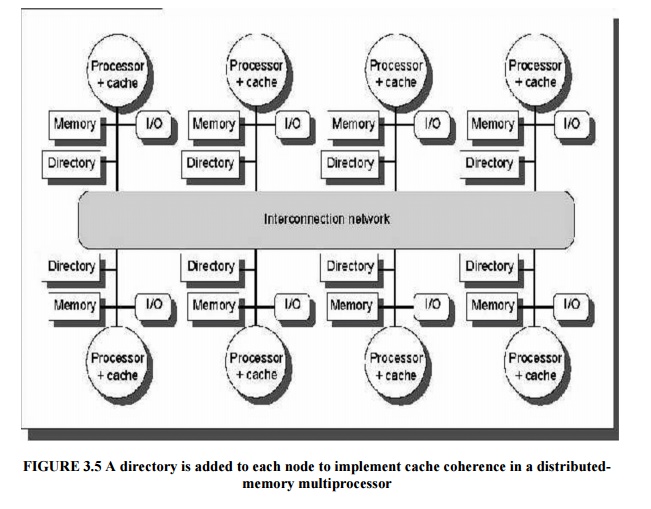 There are two primary operations that a directory protocol must implement:

Ø To implement these operations, a directory must track the state of each cache block.

In a simple protocol, these states could be the following:

Ø Shared—One or more processors have the block cached, and the value in memory is up to date (as well as in all the caches)

Ø Uncached—No processor has a copy of the cache block

Exclusive—Exactly one processor has a copy of the cache block and it has written the block, so the memory copy is out of date. The processor is called the owner of the block.

In addition to tracking the state of each cache block, we must track the processors that have copies of the block when it is shared, since they will need to be invalidated on a write.

The simplest way to do this is to keep a bit vector for each memory block. When the block is shared, each bit of the vector indicates whether the corresponding processor has a copy of that block. We can also use the bit vector to keep track of the owner of the block when the block is in the exclusive state. For efficiency reasons, we also track the state of each cache block at the individual caches.

A catalog of the message types that may be sent between the processors and t he directories. Figure 6.28 shows the type of messages sent among nodes. The local node is the node where a request originates.

A remote node is the node that has a copy of a cache block, whether exclusive (in which case it is the only copy) or shared. A remote node may be the same as either the local node or the home node. In such cases, the basic protocol does not change, but interprocessor messages may be replaced with intraprocessor messages. 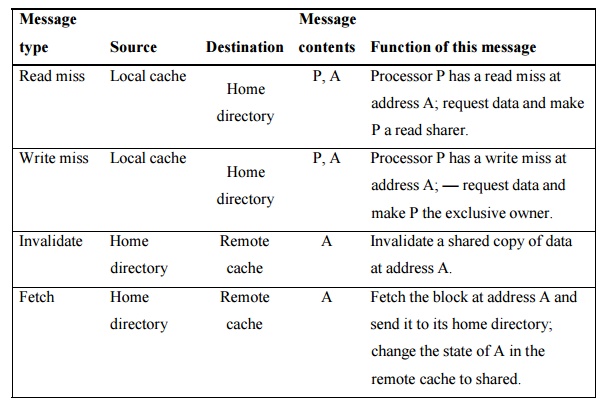