Multithreading allows multiple threads to share the functional units of a single processor in an overlapping fashion. To permit this sharing, the processor must duplicate the independent state of each thread. For example, a separate copy of the register file, a separate PC, and a separate page table are required for each thread.

There are two main approaches to multithreading.

Ø Fine-grained multithreading switches between threads on each instruction, causing the execution of multiples threads to be interleaved. This interleaving is often done in a round-robin fashion, skipping any threads that are stalled at that time.

Simultaneous multithreading (SMT) is a variation on multithreading that uses the resources of a multiple issue, dynamically-scheduled processor to exploit TLP at the same time it exploits ILP. The key insight that motivates SMT is that modern multipleissue processors often have more functional unit parallelism available than a single thread can effectively use. Furthermore, with register renaming and dynamic scheduling, multiple instructions from independent threads can be issued without regard to the dependences among them; the resolution of the dependences can be handled by the dynamic scheduling capability.

Figure 6.44 conceptually illustrates the differences in a processor’s ability to exploit the resources of a superscalar for the following processor configurations:

n       a superscalar with no multithreading support,

n       a superscalar with coarse-grained multithreading,

n       a superscalar with fine-grained multithreading, and

n       a superscalar with simultaneous multithreading. 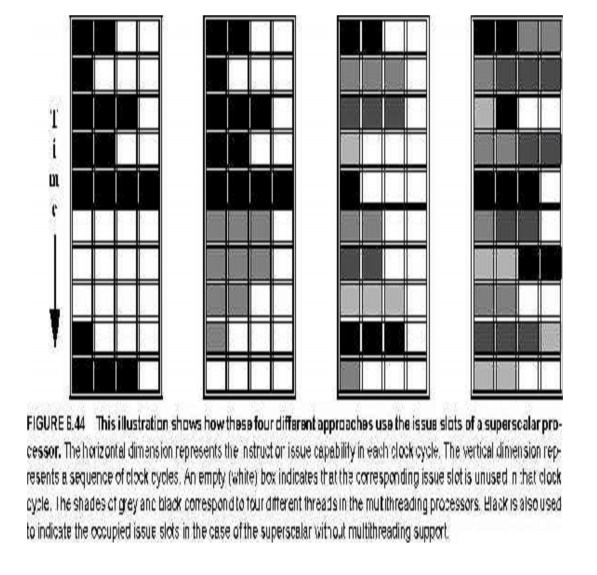 In the superscalar without multithreading support, the use of issue slots is limited by a lack of ILP.

In the coarse-grained multithreaded superscalar, the long stalls are partially hidden by switching to another thread that uses the resources of the processor.In the fine-grained case, the interleaving of threads eliminates fully empty slots. Because only one thread issues instructions in a given clock cycle.

Figure 6.44 greatly simplifies the real operation of these processors it does illustrate the potential performance advantages of multithreading in general and SMT in particular.

There are a variety of design challenges for an SMT processor, including:

Ø Maintaining low overhead on the clock cycle, particularly in critical steps such as instruction issue, where more candidate instructions need to be considered, and in instruction completion, where choosing what instructions to commit may be challenging, and

Ø Ensuring that the cache conflicts generated by the simultaneous execution of multiple threads do not cause significant performance degradation.

In viewing these problems, two observations are important. In many cases, the potential performance overhead due to multithreading is small, and simple choices work well enough. Second, the efficiency of current super-scalars is low enough that there is room for significant improvement, even at the cost of some overhead.