There are two requirements for secure use of conventional encryption:

opponent should be unable to decrypt ciphertext or discover the key even if he or she is in possession of a number of ciphertexts together with the plaintext that produced each ciphertext.

2.                              Sender and receiver must have obtained copies of the secret key in a secure fashion and must keep the key secure. If someone can discover the key and knows the algorithm, all communication using this key is readable.

We assume that it is impractical to decrypt a message on the basis of the ciphertext plus knowledge of the encryption/decryption algorithm. In other words, we do not need to keep the algorithm secret; we need to keep only the key secret. This feature of symmetric encryption is what makes it feasible for widespread use. The fact that the algorithm need not be kept secret means that manufacturers can and have developed low-cost chip implementations of data encryption algorithms. These chips are widely available and incorporated into a number of products. With the use of symmetric encryption, the principal security problem is maintaining the secrecy of the key.

Let us take a closer look at the essential elements of a symmetric encryp-tion scheme, using Figure 2.2. A source produces a message in plaintext, X = [X1, X2, ..... , XM]. The M elements of X are letters in some finite alphabet. Traditionally, the alphabet usually consisted of the 26 capital letters. Nowadays, the binary alphabet {0, 1} is typically used. For encryption, a key of the form K = [K1, K2, ..... , KJ] is generated. If the key is generated at the message source, then it must also be provided to the destination by means of some secure chan-nel. Alternatively, a third party could generate the key and securely deliver it to both source and destination. 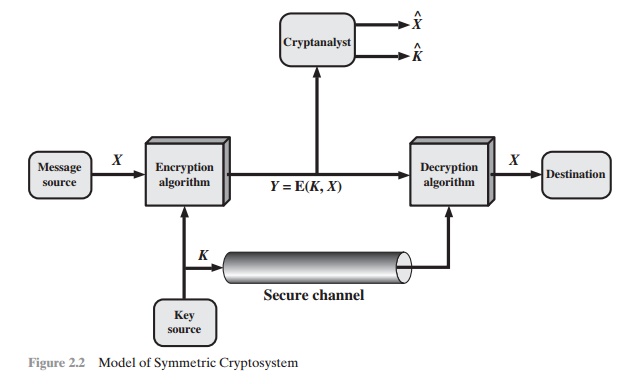 This notation indicates that Y is produced by using encryption algorithm E as a function of the plaintext X , with the specific function determined by the value of the key K .

The intended receiver, in possession of the key, is able to invert the transformation:

An opponent, observing Y but not having access to K or X , may attempt to recover X or K or both X and K. It is assumed that the opponent knows the encryption

(E) and decryption (D) algorithms. If the opponent is interested in only this particular message, then the focus of the effort is to recover X by generating a plaintext estimate

X . Often, however, the opponent is interested in being able to read future messages as N well, in which case an attempt is made to recover K by generating an estimate K.

1.      The type of operations used for transforming plaintext to ciphertext. All encryption algorithms are based on two general principles: substitution, in which each element in the plaintext (bit, letter, group of bits or letters) is mapped into another element, and transposition, in which elements in the plaintext are rearranged. The fundamental requirement is that no informa-tion be lost (that is, that all operations are reversible). Most systems, referred to as product systems, involve multiple stages of substitutions and transpositions.

If either type of attack succeeds in deducing the key, the effect is catastrophic: All future and past messages encrypted with that key are compromised.

We first consider cryptanalysis and then discuss brute-force attacks.

Table 2.1 summarizes the various types of cryptanalytic attacks based on the amount of information known to the cryptanalyst. The most difficult problem is pre-sented when all that is available is the ciphertext only. In some cases, not even the encryption algorithm is known, but in general, we can assume that the opponent does know the algorithm used for encryption. One possible attack under these cir-cumstances is the brute-force approach of trying all possible keys. If the key space is very large, this becomes impractical. Thus, the opponent must rely on an analysis of the ciphertext itself, generally applying various statistical tests to it. To use this approach, the opponent must have some general idea of the type of plaintext that is concealed, such as English or French text, an EXE file, a Java source listing, an accounting file, and so on. 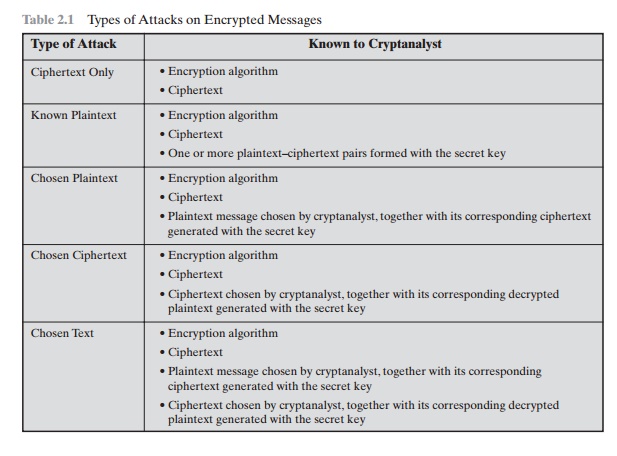 The ciphertext-only attack is the easiest to defend against because the oppo-nent has the least amount of information to work with. In many cases, however, the analyst has more information. The analyst may be able to capture one or more plaintext messages as well as their encryptions. Or the analyst may know that cer-tain plaintext patterns will appear in a message. For example, a file that is encoded in the Postscript format always begins with the same pattern, or there may be a standardized header or banner to an electronic funds transfer message, and so on. All these are examples of known plaintext. With this knowledge, the analyst may be able to deduce the key on the basis of the way in which the known plaintext is transformed.

Closely related to the known-plaintext attack is what might be referred to as a probable-word attack. If the opponent is working with the encryption of some gen-eral prose message, he or she may have little knowledge of what is in the message. However, if the opponent is after some very specific information, then parts of the message may be known. For example, if an entire accounting file is being transmitted, the opponent may know the placement of certain key words in the header of the file. As another example, the source code for a program developed by Corporation X might include a copyright statement in some standardized position.

If the analyst is able somehow to get the source system to insert into the system a message chosen by the analyst, then a chosen-plaintext attack is possible. An example of this strategy is differential cryptanalysis, explored in Chapter 3. In general, if the analyst is able to choose the messages to encrypt, the analyst may deliberately pick patterns that can be expected to reveal the structure of the key.

Table 2.1 lists two other types of attack: chosen ciphertext and chosen text. These are less commonly employed as cryptanalytic techniques but are nevertheless possible avenues of attack.

Two more definitions are worthy of note. An encryption scheme is unconditionally secure if the ciphertext generated by the scheme does not con-tain enough information to determine uniquely the corresponding plaintext, no matter how much ciphertext is available. That is, no matter how much time an opponent has, it is impossible for him or her to decrypt the ciphertext simply because the required information is not there. With the exception of a scheme known as the one-time pad (described later in this chapter), there is no encryp-tion algorithm that is unconditionally secure. Therefore, all that the users of an encryption algorithm can strive for is an algorithm that meets one or both of the following criteria:

•          The cost of breaking the cipher exceeds the value of the encrypted information.

•          The time required to break the cipher exceeds the useful lifetime of the information.

An encryption scheme is said to be computationally secure if either of the foregoing two criteria are met. Unfortunately, it is very difficult to estimate the amount of effort required to cryptanalyze ciphertext successfully.

All forms of cryptanalysis for symmetric encryption schemes are designed to exploit the fact that traces of structure or pattern in the plaintext may survive encryption and be discernible in the ciphertext. This will become clear as we exam-ine various symmetric encryption schemes in this chapter. We will see in Part Two that cryptanalysis for public-key schemes proceeds from a fundamentally different premise, namely, that the mathematical properties of the pair of keys may make it possible for one of the two keys to be deduced from the other.

A brute-force attack involves trying every possible key until an intelligible translation of the ciphertext into plaintext is obtained. On average, half of all possi-ble keys must be tried to achieve success. Table 2.2 shows how much time is involved for various key spaces. Results are shown for four binary key sizes. The 56-bit key size is used with the Data Encryption Standard (DES) algorithm, and the 168-bit key size is used for triple DES. The minimum key size specified for Advanced Encryption Standard (AES) is 128 bits. Results are also shown for what are called substitution codes that use a 26-character key (discussed later), in which all possible permutations of the 26 characters serve as keys. For each key size, the results are shown assuming that it takes 1 μs to perform a single decryption, which is a reason-able order of magnitude for today’s machines. With the use of massively parallel organizations of microprocessors, it may be possible to achieve processing rates many orders of magnitude greater. The final column of Table 2.2 considers the results for a system that can process 1 million keys per microsecond. As you can see, at this performance level, DES can no longer be considered computationally secure.