Swadeshi movement in Tamil Nadu, notably in Tirunelveli district, generated a lot of attention and support.

Swadeshi movement in Tamil Nadu, notably in Tirunelveli district, generated a lot of attention and support. While the Swadeshi movement in Tamil Nadu had an all India flavour, with collective anger against the British rule remaining the common thread, it was also underpinned by Tamil - pride and consciousness. There was a deep divide in the Tamilnadu congress between the moderates and the extremists.

(a) Development of Vernacular Oratory

Initially, the movement was more of a reaction to the partition of Bengal and regular meetings were held to protest the partition. The speakers, in such meetings, spoke mostly in the vernacular language to an audience that included students, lawyers, and labourers at that time. The shift from English oratory to vernacular oratory was a significant development of this time, which had a huge impact on the mass politics in Tamil Nadu.

Swadeshi meetings at the Marina beach in Madras were a regular sight. The Moore Market complex in Madras was another venue utilised for such gatherings. During the period (1905-1907) there are police reports calling students dangerous and their activities as seditious. Europeans in public places were greeted by the students with shouts of Vande Mataram. In 1907, Bipin Chandra Pal came to Madras and his speeches on the Madras Beach electrified the audience and won new converts to the nationalist cause. The visit had a profound impact all over Tamil Nadu. The public speeches in the Tamil language created an audience which was absent during the formative years of the political activities in Tamil Nadu.

The Swadeshi movement in Tamil Nadu came to national attention in 1906 when V.O Chidambaram mooted the idea of launching a swadesh shipping venture in in opposition to the monopoly of the British in navigation through the coast. 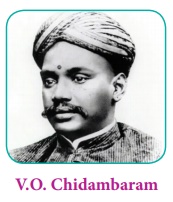 Shares were open only to Indians, Ceylonese and other Asian nationals. V.O.C. purchased two steamships, S.S. Gallia and S.S. Lawoe. When in the other parts of India, the response to Swadeshi was limited to symbolic gestures of making candles and bangles, the idea of forging a Swadeshi Steam Navigation Company was really spectacular. V.O.C invoked the rich history of the region and the maritime glory of India’s past and used it as a reference point to galvanize the public opinion in favour of a Swadeshi venture in the sea.

The initiative of V.O.C. was lauded by the national leaders. Lokmanya Tilak wrote about the success of the Swadeshi Navigation Company in his papers Kesari and Mahratta. Aurobindo Ghose also lauded the Swadeshi efforts and helped to promote the sale of shares of the company. The major shareholders included Pandithurai and Haji Fakir Mohamed. 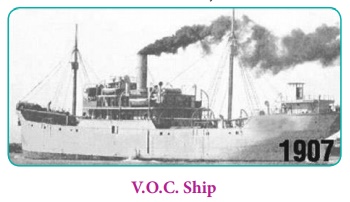 The initial response of the British administration was to ignore the Swadeshi company. As patronage for Swadeshi Company increased, the European officials exhibited blatant bias and racial partiality against the Swadeshi steamship.

After attending the session of the Indian National Congress at Surat, V.O.C. on his return decided to work on building a political organisation. While looking for an able orator, he came across Subramania Siva, a swadeshi preacher. From February to March 1907, both the leaders addressed meetings almost on a daily basis at the beach in Tuticorin, educating the people about swadeshi and the boycott campaign. The meetings were attended by thousands of people. These public gatherings were closely monitored by the administration.

In 1908, the abject working and living conditions of the Coral Mill workers attracted the attention of V.O.C and Siva. In the next few days, both the leaders addressed the mill workers. In March 1908, the workers of the Coral Cotton Mills, inspired by the address went on strike. It was one of the earliest organised labour agitations in India.

The strike of the mill workers was fully backed by the nationalist newspapers. The mill owners, however, did not budge and was supported by the government which had decided to suppress the strike. To further increase the pressure on the workers, the leaders were prohibited from holding any meetings in Tuticorin. Finally, the mill owners decided to negotiate with the workers and concede their demands.

This victory of the workers generated excitement among the militants in Bengal and it was hailed by the newspapers in Bengal. For instance, Aurobindo Ghosh’s Bande Matram hailed the strike as “forging a bond between educated class and the masses, which is the first great step towards swaraj…. Every victory of Indian labour is a victory for the nation….”

The growth of newspapers, both in English and Tamil language, aided the swadeshi movement in Tamil Nadu. G. Subramaniam was one of the first among the leaders to use newspapers to spread the nationalist message across a larger audience. Subramaniam, along with five others, founded The Hindu (in English) and Swadesamitran (which was the first ever Tamil daily). In 1906 a book was published by Subramaniam to condemn the British actions during the Congress Conference in Barsal. Swadesamitran extensively reported nationalist activities, particularly the news regarding V.O.C. and his speeches in Tuticorin. 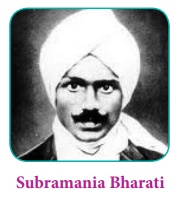 Subramania Bharati became the sub-editor of Swadesamitran around the time (1904) when Indian nationalism was looking for a fresh direction. Bharati was also editing Chakravartini, a Tamil monthly devoted to the cause of Indian women.

Two events had a significant impact on Subramania Bharati. A meeting in 1905 with Sister Nivedita, an Irish woman and a disciple of Vivekananda, whom he referred to as Gurumani (teacher), greatly inspired his nationalist ideals. The churning within the Congress on the nature of engagement with the British rule was also a contributory factor. As discussed earlier in this lesson, the militants ridiculed the mendicancy of the moderates who wanted to follow the constitutional methods. Bharati had little doubt, in his mind, that the British rule had to be challenged with a fresh approach and methods applied by the militant nationalists appealed to him more. For instance, his fascination with Tilak grew after the Surat session of the Congress in 1907. He translated into Tamil Tilak’s Tenets of the New Party and a booklet on the Madras militants’ trip to the Surat Congress in 1907. Bharati edited a Tamil weekly India, which became the voice of the radicals.

(e) Arrest and imprisonment of V.O.C. and Subramania Siva

On March 9, 1907, Bipin Chandra Pal was released from prison after serving a six-month jail sentence.The swadeshi leaders in Tamil Nadu planned to celebrate the day of his release as ‘Swarajya Day’ in Tirunelveli. The local administration refused permission. V.O.C., Subramania Siva and Padmanabha Iyengar defied the ban and went ahead. They were arrested on March 12, 1908, on charges of sedition.

The local public, angered over the arrest of the prominent swadeshi leaders, reacted violently. Shops were closed in a general show of defiance. The municipality building and the police station in Tirunelveli were set on fire. More importantly, the mill workers came out in large numbers to protest the arrest of swadeshi leaders. After a few incidents of confrontation with the protesting crowd, the police open fired, and four people were killed. 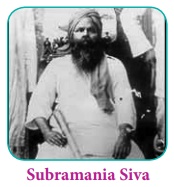 On 7 July 1908, V.O.C. and Subramania Siva were found guilty and imprisoned on charges of sedition. Siva was awarded a sentence of 10 years of transportation for his seditious speech whereas V.O.C. got a life term (20 years) for abetting him. V.O.C. was given another life sentence for his own seditious speech. This draconian sentence reveals how seriously the Tirunelveli agitation was viewed by the government.

In the aftermath of this incident, the repression of the British administration was not limited to the arrest of a few leaders. In fact, people who had actively participated in the protest were also punished and a punitive tax was imposed on the people of Tirunelveli and Tuticorin.

Excerpts from the Judgment in the case of King Emperor versus V.O.C. and Subramania Siva (4 November 1908).“It seems to me that sedition at any time is a most serious offense. It is true that the case is the first of its kind in the Presidency, but the present condition of other Presidencies where the crime seems to have secured a foothold would seem to indicate that light sentences of imprisonment of a few months or maybe a year or two are instances of misplaced leniency. ...The first object of a sentence is that it shall be deterrent not to the criminal alone but to others who feel any inclination to follow his example. Here we have to deal with a campaign of sedition which nearly ended in revolt. The accused are morally responsible for all the lives lost in quelling the riots that ensured on their arrest”.

Repression of the Swadeshi efforts in Tuticorin and the subsequent arrest and humiliation of the swadeshi leaders generated anger among the youth. A plan was hatched to avenge the Tirunelveli event. A sustained campaign in the newspapers about the repressive measures of the British administration also played a decisive role in building people’s anger against the administration. 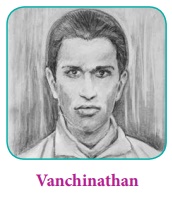 In June 1911, the collector of Tirunelveli, Robert Ashe, was shot dead at Maniyachi Railway station by Vanchinathan. Born in the Travancore state in 1880, he was employed as a forest guard at Punalur in the then Travancore state. He was one of the members of a radical group called Bharata Mata Association. The aim of the association was to kill the European officers and inspire Indians to revolt, which they believed would eventually lead to Swaraj. Vanchinathan was trained in the use of a revolver, as part of the mission, by V.V. Subramaniam in Pondicherry. 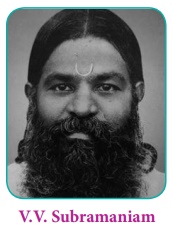 After shooting Ashe at the Maniyachi Junction, Vanchinathan shot himself with the same pistol. A letter was found in his pocket which helps to understand the strands of inspiration for the revolutionaries like Vanchinathan.

The aftermath of the Assassination

During the course of the trial, the British government was able to establish that V.V.S and other political exiles in Pondicherry were in close and active association with the accused in the Ashe murder conspiracy. The colonial administration grew more suspicious with the Pondicherry groups and their activities. Such an atmosphere further scuttled the possibility of nationalistic propaganda and their activities in Tamil Nadu. As a fall-out of the repressive measure taken by the colonial government, the nationalist movement in Tamil Nadu entered a period of lull and some sort of revival happened only with the Home Rule Movement in 1916.