Both the groups, moderate and militant, were well aware of the evils or the wrong doings of the British rule.

As pointed out earlier, thanks to the campaigns conducted by Lala Lajpat Rai, Bal Gangadhar Tilak and Bipin Chandra Pal, often referred to as the Lal–Bal–Pal triumvirate, Maharashtra, Bengal, Punjab, emerged as the epicentres of militant nationalism during the Swadeshi phase. Aurobindo Ghose was another influential figure in the militant leadership. The nationalism of this form was more assertive compared to the early Indian nationalism. 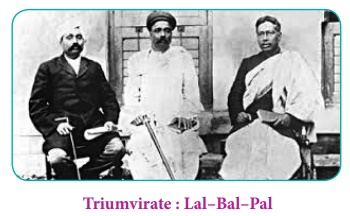 Both the groups, moderate and militant, were well aware of the evils or the wrong doings of the British rule. The moderates, however, worked under the belief that the British rule in India could be reformed by convincing the rulers through representation and petitioning. The militant nationalist, on the other hand, was of the opinion that the colonial rulers would never be amenable to reason, as they would not like to give up the advantages of an empire.

Sometime around 1905, Aurobindo Ghose was asked by a man as to how to become a patriot. In response Aurobindo pointed to a wall map of India, and said “Do you see this map? It is not a map but the portrait of Bharat Mata: its cities and mountains rivers and jungles form her physical body. All her children are her nerves, large and small…. Concentrate on Bharat as a living mother, worship her with nine-fold bhakti.”

Militant nationalism also changed the nature of political pressure from the earlier force of public opinion of educated Indians to the protesting masses. Despite these changes, the militant nationalism phase retained a continuity from the moderate phase. This continuity was evident in the inability to transcend the peaceful method of struggle and for the most parts militant nationalism remained tied to the idea of non-violence. However, they appealed to the patriotic sentiments of the people using the religious symbols.

One of the common goals of the militant leaders was to achieve Swaraj or Self Rule. However, the leaders differed on the meaning of Swaraj. For Tilak, Swaraj was restricted to the Indian control over the administration or rule by the natives, but not total severance of relation with Britain. In Bipin Chandra Pal’s view, Swaraj was the attainment of complete freedom from any foreign rule.

The other point of departure of the militants from the moderates was over the rising extremism in Bengal, Punjab, and Maharashtra. Unlike the moderates, who were critical of the reckless revolutionaries, militant nationalists were sympathetic towards them. However, the political murders and individual acts of terrorism were not approved of by the militant leaders and they were cautious of associating themselves with the cause of revolutionaries.

The patriotism glued with the assertion of Hindu beliefs was not acceptable to the Muslims. Also much like their predecessors the leaders of the swadeshi movement failed to penetrate the larger section of the society. By 1908 militant nationalism was on the decline. The Surat split of 1907 was another contributing factor to this decline. 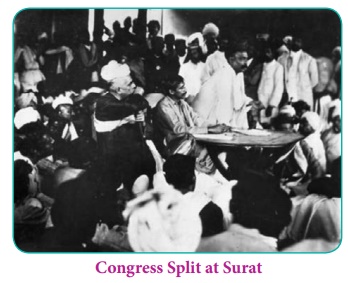 The tension between the militants and the moderates became more pronounced with the appointment of Lord Minto as the new Viceroy to India in 1906. As the tension was rising between the two groups, a split was avoided, in the 1906 Calcutta session, by accepting demands of moderate leaders and electing Dadabhai Naoroji as president. Most of the moderates, led by Pherozeshah Mehta, were defeated in the election. The militants managed to pass four resolutions on Swadeshi, Boycott, National Education, and Self-Government. 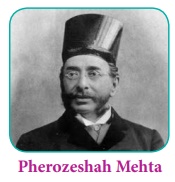 The next session of Congress was originally planned to be held in Poona, considered to be a stronghold of the militants. Fearing repeat of the Calcutta session, the moderates shifted the venue to Surat. The militants proposed Lala Lajpat Rai’s name for the next Congress presidency opposing the moderate’s candidate Rash Behari Ghosh. Lala Lajpat Rai, however, turned down the offer to avoid the split. The matter finally boiled down to the question of retaining the four resolutions that were passed in the Calcutta session in 1906. The Pherozeshah Mehta group sought removal of those items from the agenda. In order to counter Mehta’s manoeuvering, the militants decided to oppose the election of Rash Behari Gosh as president. The session ended in chaos.

The Indian National Congress, born in December 1885, was now split into two groups – militant and moderate. The Congress which emerged after the Surat split was more loyal to the British than they were before. The new Congress, minus the militants, came to be known as Mehta Congress and the 1908 session of the Congress was attended only by the moderates who reiterated their loyalty to the Raj. The politics of militants, on the other hand, could not crystallize into a new political organization. The primary reason was the repressive measures of the government by putting all the prominent leaders in jail.