Summary of ATP Formation During the Breakdown of Glucose

We can now determine the total number of ATP mole-cules that, under optimal conditions, can be formed by the energy from one molecule of glucose.

Summary of ATP Formation During the Breakdown of Glucose

We can now determine the total number of ATP mole-cules that, under optimal conditions, can be formed by the energy from one molecule of glucose.

1.During glycolysis, four molecules of ATP are formed, and two are expended to cause the initial phosphorylation of glucose to get the process going. This gives a net gain of two molecules ofATP.

2.During each revolution of the citric acid cycle, one molecule of ATP is formed. However, because each glucose molecule splits into two pyruvic acid molecules, there are two revolutions of the cycle for each molecule of glucose metabolized, giving a net production of two more molecules of ATP. 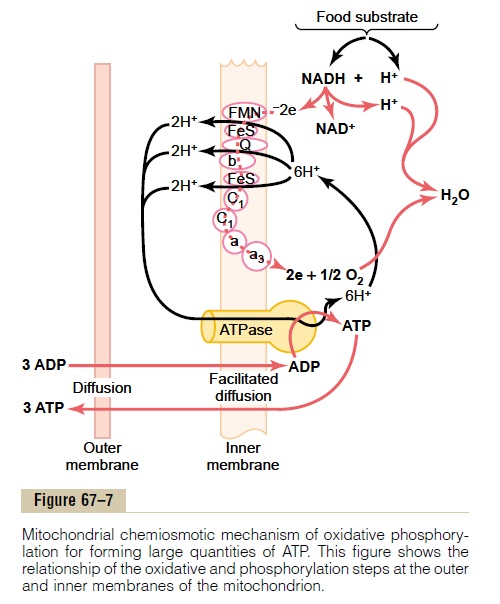 3.During the entire schema of glucose breakdown, a total of 24 hydrogen atoms are released during glycolysis and during the citric acid cycle. Twenty of these atoms are oxidized in conjunction with the chemiosmotic mechanism shown in Figure 67â€“7, with the release of three ATP molecules per two atoms of hydrogen metabolized. This gives an additional 30 ATP molecules.

4.The remaining four hydrogen atoms are released by their dehydrogenase into the chemiosmotic oxidative schema in the mitochondrion beyond the first stage of Figure 67â€“7. Two ATP molecules are usually released for every two hydrogen atoms oxidized, thus giving a total of four more ATPmolecules.

Now, adding all the ATP molecules formed, we find a maximum of 38 ATP molecules formed for each molecule of glucose degraded to carbon dioxide and water. Thus, 456,000 calories of energy can be stored in the form of ATP, whereas 686,000 calories are released during the complete oxidation of each gram-molecule of glucose. This represents an overall maximum efficiency of energy transfer of 66 per cent. The remaining 34 per cent of the energy becomes heat and, therefore, cannot be used by the cells to perform specific functions.