The term opioids describes a class of substances that act on opioid receptors.

The term opioids describes a class of substances that act on opioid receptors. Numerous opioid receptors have been identified, but the physiologic and pharmacologic responses in man are best understood for the mu (µ) and kappa (κ) receptors. The µ receptor, for which morphine is a prototypical agonist, appears to be the one most closely related to opioid analgesic and euphorigenic effects. Opioids can be naturally-occuring substances such as morphine, semi-synthetics such as heroin, and synthetics with morphine-like effects such as meperidine. These drugs are prescribed as analgesics, anesthetics, antidiarrheal agents, or cough suppressants. In addition to morphine and heroin, the opioids include codeine, hydromorphone, methadone, oxycodone and fentanyl among others. Drugs such as buprenorphine, a partial agonist at the µ receptor, and pentazocine, an agonist-antagonist, are also included in this class because their physiologic and behavioral effects are mediated through opioid receptors (Table 43.1). 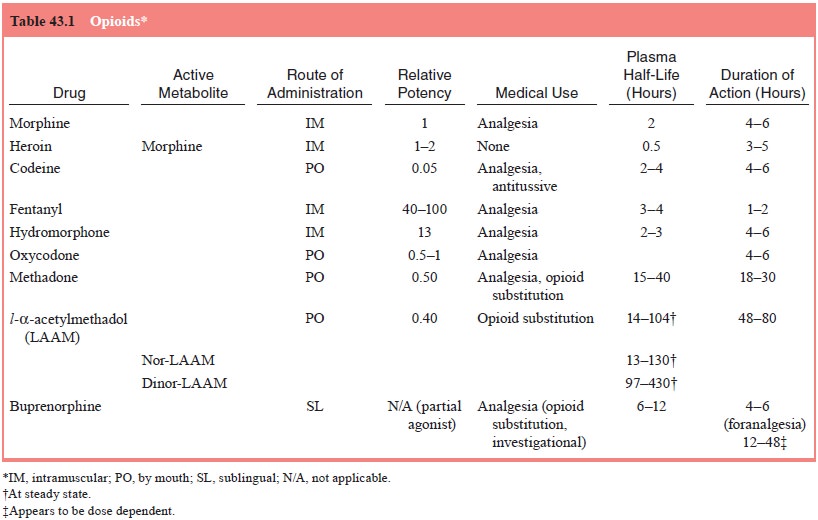 Opioids are the most effective medications for relief of se-vere pain and are widely used for that purpose. Their euphoric properties can also result in inappropriate use, abuse and de-pendence (i.e., “addiction”), which is why they have been placed under the Controlled Substances Act. The more potent opioids approved for medical use are under schedule II: examples are fen-tanyl, hydromorphone, methadone, morphine; others are under schedules III and IV.