Chapter: Human Neuroanatomy(Fundamental and Clinical): Gross Anatomy of the Cerebellum

The cerebellum consists of a part lying near the midline called the vermis, and of two lateral hemispheres. It has two surfaces, superior and inferior.

Gross Anatomy of the Cerebellum

The cerebellum lies behind the pons and the medulla. It is separated from the cerebrum by a fold of dura mater called the tentorium cerebelli. Anteriorly, the fourth ventricle intervenes between the cerebellum (behind), and the pons and medulla (in front). Part of the cavity of the ventricle extends into the cerebellum as a transverse cleft. This cleft is bounded cranially by the superior (or anterior) medullary velum, a lamina of white matter (Fig. 20.13).

Subdivisions of the Cerebellum

The cerebellum consists of a part lying near the midline called the vermis, and of two lateral hemispheres. It has two surfaces,superior and inferior. On the superior aspect, there is no lineof distinction between vermis and hemispheres. On the inferior aspect, the two hemispheres are separated by a deep depression called the vallecula. The vermis lies in the depth of this depression. On each side the vermis is separated from the corresponding cerebellar hemisphere by a paramediansulcus. Anteriorly and posteriorly the hemispheres extend beyond the vermis and are separated byanterior and posterior cerebellar notches. (The falx cerebelli lies in the posterior notch).

Some of the fissures on the surface of the cerebellum are deeper than others. They divide the cerebellum into lobes within which smaller lobules may be recognised. To show the various subdivisions of the cerebellum in a single illustration it is usual to represent the organ as if it has been ‘opened out’ so that the superior and inferior aspects can both be seen. Such an illustration is shown in Fig. 7.1. This should be compared with Figs. 7.2 A and B which are more realistic drawings of the superior and inferior surfaces, and with Fig. 7.3 which is a midline section showing the subdivisions of the vermis. 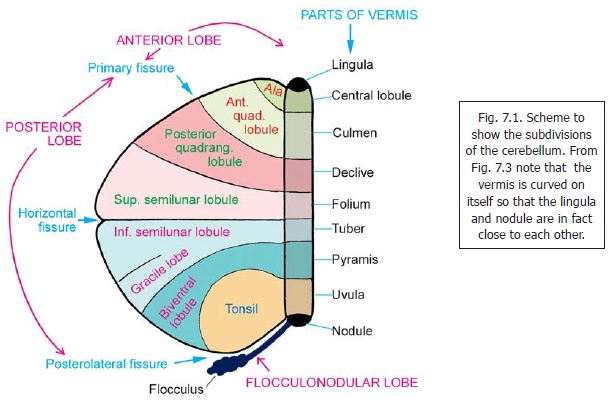 The deepest fissures in the cerebellum are:

These fissures divide the cerebellum into three lobes. The part anterior to the primary fissure is the anterior lobe. The part between the two fissures is the posterior lobe (sometimes called the middle lobe). The remaining part is the flocculonodular lobe.The anterior and posterior lobestogether form the corpus cerebelli.

The vermis is so called because it resembles a worm. Proceeding from above downwards in Fig. 7.1 it is seen to consist of thelingula, central lobule and culmen (in the anterior lobe); the declive,folium (or folium vermis), tuber (or tuber vermis), pyramis (or pyramid) and uvula (in themiddle lobe); and the nodule (in the flocculonodular lobe).

Some other terms used are as follows. The biventral lobule is so called as it is partially divided into a lateral belly and a medial belly. The posterior quadrangular lobule and the declive are collectivelyreferred to as the simple lobule. The tonsil and biventral lobule correspond to the paraflocculus of some other species.

The term accessory paraflocculus is applied to a small flower-like area between the tonsil and the flocculus.

The fissures separating the subdivisions of the cerebellum are shown in Fig. 7.1. We have seen that the primary fissure separates the anterior and posterior lobes. It, therefore intervenes between the anterior and posterior quadrangular lobules; and also separates the culmen and declive. The posterolateral fissure separates the posterior lobe from the flocculonodular lobe; and extendsinto the interval between the nodule and the uvula. The horizontal fissure (Figs. 7.1, 7.3) divides the cerebellum into upper and lower halves. The parts shown above this fissure in Fig. 7.1 are seen on the superior surface of the cerebellum (Fig. 7.2A), and those below it on the inferior surface (Fig. 7.2B). It intervenes between the superior and inferior semilunar lobules; and between the folium and the tuber. 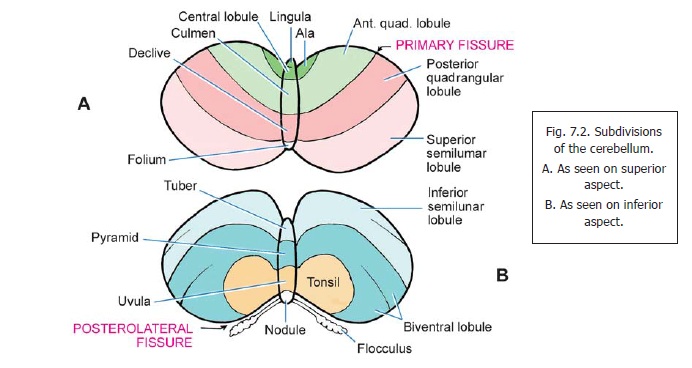 From developmental, phylogenetic and functional points of view the cerebellum is often divided into archicerebellum (oldest, black in Fig. 7.1); paleocerebellum (old, shaded in dots); and neocerebellum (new, unshaded). These correspond roughly (but not precisely) to the flocculonodularnode, anterior and posterior lobes respectively. The connections of the archicerebellum are predominantly vestibular; and it is concerned with the maintenance of body equilibrium. The paleocerebellum is connected predominantly to the spinal cord. It is concerned mainly with maintenance of muscle tone and finer control of movements. The neocerebellum has extensive connections with the cerebral cortex (through pontine nuclei). It is usually regarded as being responsible for fine co-ordination of voluntary movements, but its precise role is not known.

From the point of view of its connections the cerebellar cortex may also be divided into a vermal part (vermis), paravermal (or paramedian) parts and lateral parts.