Sturgeons are of considerable economic importance in the former USSR and Iran, particularly as the source of true caviar. From among the 13 or so species occurring in the area, five are of major importance.

Sturgeons are of considerable economic importance in the former USSR and Iran, particularly as the source of true caviar. From among the 13 or so species occurring in the area, five are of major importance. These are the stellate sturgeon (Acipenser stellatus), Russian sturgeon (A.güldenstädti), thorn sturgeon (A. nudiventris),sterlet (A. ruthenus) and beluga (Huso huso). Acipenseridae are slow-growing, slow-maturing and long-living fish. The beluga can live to 100 years or more, the Russian sturgeon 50–60 years and the stellate sturgeon up to 30 years.

But the older fish are usually rare in the rivers. Among the sexually mature fish which ascend the river Volga, beluga are usually between 12 and 27 years old, Russian sturgeon 10–20 years old and stellate sturgeon 8–17 years old. The maximum weight of a beluga may be as much as 1 ton, but the average is 80–100kg. The average weight of Russian sturgeon is about 15kg and of the stellate sturgeon 8–9kg. These species do not spawn every year, but after certain time intervals, ranging from three to six years for females, and somewhat less for males. Sexually mature fish which ascend the river for spawning form a relatively small percentage of the stock belonging to about a dozen generations.

The sturgeon populations of the Caspian, Black and Azor seas have been severely affected by the construction of dams across the rivers for power generation and by excessive fishing. In order to rehabilitate the stocks and maintain them at an optimum level, the state has established a programme of hatchery production and release of young sturgeons, together with measures for the regulation of fishing and provision of facilities for upstream migration of the required number of brood fish. In order to enhance the natural populations of the species, large-scale transplantations of the spawners caught in the tail waters of the Volga were carried out in live fish containers. During a period of six years, 223000 spawners were released into the Volgograd reservoir from the dam of the hydro-electric station, either by transporting them in containers or with the help of fish elevators. Though these transplantations were very effective in improving natural propagation, the construction of additional dams made hatchery production the only major means of maintaining the resource. 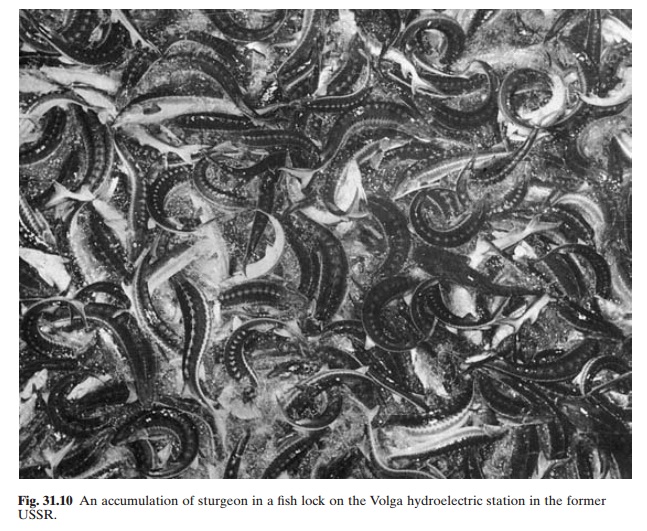 Several hatcheries have been established, especially in the Astrakhan region in the Volga delta, for artificial propagation of sturgeons. Although spawning channels have also been tried, most of the propagation is now done by hypophysation. Brood fish are collected from the rivers during the breeding season, generally between April and August, and held in long rectangular maturing ponds that have a strong flow of clean fresh water. The upstream portions of the ponds have bottoms paved with pebbles and the downstream portions are of earth. In order to hasten maturity and spawning, sturgeon pituitary gland extract is injected at the rate of 2–2.5mg dry weight per kg body weight in females and half of that in males.

Carp pituitary injection at the rate of 4–5mg per kg of body weight is also reported to be effective. Injected fish are held in tanks until they are ripe. As the fish are too large and difficult to handle, and the structure of the oviduct allows only partial stripping, they have to be killed for egg collection.A ripe female is stunned and suspended from a hook. The abdomen is slit open to remove the eggs, taking care to prevent loss of loose eggs through the genital opening when pressure is exerted. After washing, the eggs are fertilized with milt. Once the shells of the eggs have hardened, the excess sperm and the sticky coating on the eggs are washed off with running water containing 10 per cent chalk or powdered clay for 20–30 minutes. Salmon incubators can be used for hatching the fertilized eggs. Simple incubators which are just boxes with perforations or incubators with one or more hatching trays in a hatching trough are used. Incubationcan be carried out in the river itself, by floating the trays in a series across the river. The hatching time varies depending on the temperature and the species, but is seldom more than six days at 15°C. The yolk sac is absorbed in five to ten days.

In order to increase survival after release, the larvae are reared to fry stage for two to three weeks or four to six weeks. For growing to early fry in two to three weeks, shallow concrete tanks are used. The stocking rate is high and the larvae are fed on daphnia, chironomids and oligochaetes grown in special ponds. They are protected from light as far as possible, as light is reported to affect the development of all sturgeon species, except the stellate sturgeon. To ensure availability of live food for early growth and to enhance survival rate after release, it is considered preferable to raise them in confinement for four to six weeks. For this, hatchlings or early fry are reared in larger ponds (0.5–2ha and 0.5–2m deep), stocked at the rate of four to six per m2. The ponds are fertilized with mineral or organic fertilizers to increase the production of food organisms, especially cladocerans, copepods and benthic fauna, including chironomids. In about four to six weeks they reach a weight of 1.5–3.5g and are ready for release. Live boats are used to carry the fingerlings to brackish-water areas for release.

According to McNeil (1979) the release of juvenile sturgeons was approaching 100 million fish annually in the USSR and 5 million in Iran. The artificial recruitment of sturgeon juveniles into the Caspian Sea alone was reported to have reached 70 million. Bardach et al. (1972) estimated the survival of released fish to be about 3 per cent on the basis of the available information.