The stocking or repopulation described earlier was restricted largely to fresh-water environments.

The stocking or repopulation described earlier was restricted largely to fresh-water environments. The limitations of human control on aquatic populations in the sea areas and the immensity of efforts required to over-come them have discouraged some of the early attempts to enhance marine stocks. Probably the first large-scale attempt to stock the sea was the one started in 1950 with the cod (Gadusmorhua) larvae in the Oslofjord in Norway,which was eventually abandoned in 1971 as the benefits of stocking could not be demonstrated. It is only in recent years that more organized intensive research started to examine more closely the viability of stocking this species.

The most organized and ambitious programme of sea stocking today takes place in Japan, particularly in the Seto Inland Sea area.

It is an effort to establish what is referred to as culture-based fisheries, and forms part of a policy to increase the marine resources of the country for future harvests. It is carried out by fishery cooperatives and is promoted by

both the national and prefectural governments. Besides stocking young ones, the programme includes environmental improvements, including improvements to the sea bottom, to facilitate the interchange of sea and fresh water, the creation of special nursery and growing areas, provision of shelters, measures to reduce wave velocity, etc. The term ‘fish farming’ is used in Japan to denote this type of programme, which is considered to be a stage intermediate between ordinary fishing from natural resources and extensive fish culture. Although the breeding techniques are intensive, the grow-out takes place in the open sea, with feeding on natural food.

Probably the most important species presently stocked is the kuruma shrimp, Penaeus japonicus. Several millions of fry ofabout 1cm length are released every year. After about four or five months, the shrimps have grown to the commercial size of 11–12cm. The survival rate of the released fry depends very much on the techniques of release, environmental conditions during growth and fishing conditions. Survival rates of 0.1–10 per cent have been reported. As a result of considerable research, several measures are now being adopted to increase the survival rate of released shrimps. Being a typical burrowing species, the released fry burrow into the sub-strate and become more or less sedentary within a well-defined area, until they gradually move to offshore areas. The hatchery-reared juveniles acquire this burrowing habit only when about 10mm in size, as against 7–9mm in the natural stocks. This has led to the practice of releasing them only after they reach 10mm in size. Selection of the stocking site is an equally important factor. The most suitable sites are usually intertidal sand flats between the mean low-water neap tide and mean sea level, where there are shallow pools which will only contain a few metres of water at high tides. Hatchery-reared shrimp fry are planted at low tide into such pools, which may sometimes be fenced in for an initial period.

It has been shown experimentally that initial severe mortality occurs within 24 hours after release of the fry. Even though a combination of factors such as unfavourable temperature, salinity, oxygen content or turbulence can kill the fry, predation by invertebrates such as the hermitcrab (Pagurus dubius) and the gastropod Niothalivescens and by intertidal species of fish such asthe goby (Gobius gymnauchen) is the main cause of mortality during this period. While the invertebrates attack the shrimp fry only when their activity is impaired by adverse environmental conditions, such as low salinity or high temperatures, the predation by gobies is severe, even when the fry are very active.Almost 60 per cent of the initial mortality is ascribed to preda-tion by fish. To reduce this initial mortality the fry are released first into a fenced enclosure or an artificial lagoon in the intertidal area. Since such fenced enclosures can be subject to fre quent damage, an artificial tide-land is devised to serve as stocking site.The main objective is to control the environmental conditions in order to prevent foraging by predatory fish and yet to permit a sedentary life for the hatchery-reared shrimp fry.

The artificial tide-land (fig. 31.3) consists of (i) a stocking zone at the mean high-water neap tide level, inclined seaward at a slope of 1/200 and divided into rectangular blocks by concrete septa buried in the substrate, leaving the upper 5cm above sand, and (ii) a transfer zone at mean sea level, linking the stocking zone to the natural sand flats fronting the tide-land. The 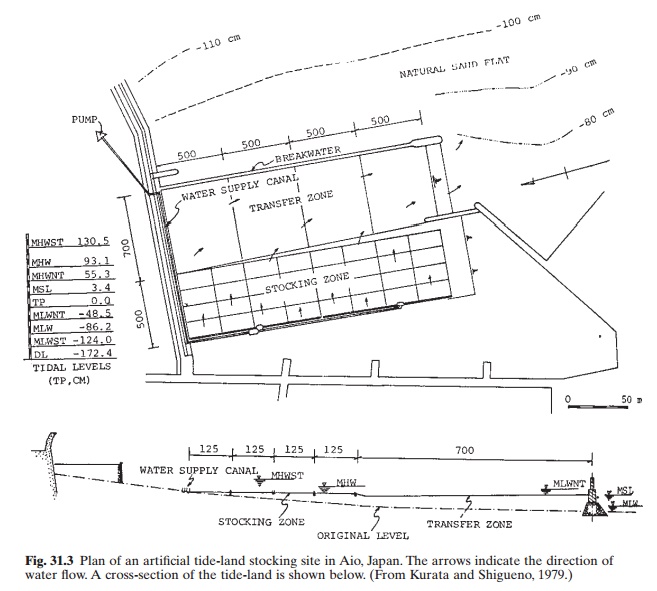 two zones are considered necessary as it has been observed that the initial loss is much less at higher elevations of about 40cm above mean sea level if the level of water in the pool is maintained by pumping. However, for free dispersion of fry as they grow in size they would have to be transferred to a transfer zone at a lower level. If the area is exposed at low tide, a pump is used to inundate it to a depth of less than 5cm.The fry are released into the stocking zone at the rate of about 100 per m2. As they grow, the fry move from the stocking zone to the transfer zone and then to the natural sand flats, to grow into adult shrimps. By the time they attain an average body length of about 25– 30mm, in about two to three weeks after release, the majority of the survivors will have left the stocking zone for deeper waters. The stocking zone can then be used again for further release.

It is obviously very difficult to determine conclusively the survival rate and cost benefit ratio of kuruma shrimp release, when the commercial fisheries are also dependent on natural recruitment in the area. If increased catches are observed they can also be ascribed to natural fluctuations of the fisheries. Despite all this, there appears to be a general agreement among certain sectors of the public, as well as among shrimp fishermen in Japan, that the stocking of kuruma is not only capable of substantially increasing the local shrimp production, but can also support a considerable fishery, if adequate numbers of fry are stocked according to an organized plan.

Although attempts have been made to stock the seas with shrimp larvae in certain other areas, as on the Kuwaiti coast, the only really successful case of developing a fishery by stocking hatchery-reared juveniles of shrimps appears to be in Italy in the lagoons of Lessina and Venice. Introduced Penaeus japonicus has been propagated in hatcheries and, as a result of stocking, small populations of the species have developed and are commercially exploited.The rearing and release of the lobsterHomarus  gammarus  has  a  long  history  in Norway, starting from around 1928. It is now possible to produce seed stock in hatcheries, using low-intensity lighting, adequate feeding, and continuous sorting according to size. Larvae can be grown individually in specially designed partitioned troughs up to the juvenile stage, to avoid cannibalism. Preliminary experiments in ranching the American lobster (H. americanus) have been conducted in Massachusetts, USA, using concrete-filled tyres as shelters (Hruby, 1979), but because lobsters are continually moving, stable populations could not be established. It is reported that half a million young lobsters are released on the Massachusetts coast every year. Experimental stocking is being done also in the state of Maine (USA), Norway and France.

Many of the on-bottom mollusc culture methods described are essentially stocking operations to increase populations in foreshore areas and to develop new resources. In northern Japan fisheries of the common scallop (Pectinopecten) have been enhanced by the collection and stocking of natural seed and by the eradication of predators such as starfish and sea urchins. Attempts have also been made to improve the production of abalones, by planting hatchery-reared seed and developing beds of seaweeds to increase their food resources. Preliminary experiments in the repopulation of the queen conch (Strombus gigas) have been made in some of theislands of the Caribbean area. It is possible to grow young conch from egg cases hatched under hatchery conditions. However, without any control of fishing for the released juveniles, their survival rates cannot be assessed.

As mentioned earlier, several efforts have been made to stock the seas with hatchery-reared fish species. Other than anadromous species, which are discussed, none of the others appear to have proved successful in enhancing populations or developing new ones. Progress is being made in the release of the red sea-bream (Pagrus major) in Japan, and the possibility of repopulating cod is being reexamined in Norway.