Among the anadromous species, it is the Pacific salmons which have received the maximum attention so far for transplantation to new areas.

Among the anadromous species, it is the Pacific salmons which have received the maximum attention so far for transplantation to new areas. The chinook salmon (Oncorhychustshawytcha) (fig. 31.4), coho salmon (O. kisutch) (fig. 31.5), sockeye salmon (O. nerka) (fig. 31.6) and the pink salmon (O. gorbuscha) (fig. 31.7) have all been transplanted to different locations in North America and other parts of the world, starting as early as the 1870s. Beginning with the establishment of an egg-collecting station on the McCloud river in California, USA, in 1872, efforts were made to establish runs of Oncorhynchus in 18 states of the USA and 15 other countries up to 1930. McNeil (1979) briefly reviewed the history of transplantation and pointed out that successful transplantations have usually been the exception in the earlier years. With increased knowledge of the ecological requirements of the transplanted species and improvements in the techniques of artificial propagation and rearing, more organized and persistent efforts have been made to establish breeding populations of different species of Pacific salmon and, to a lesser extent, the Atlantic salmon (Salmo salar). 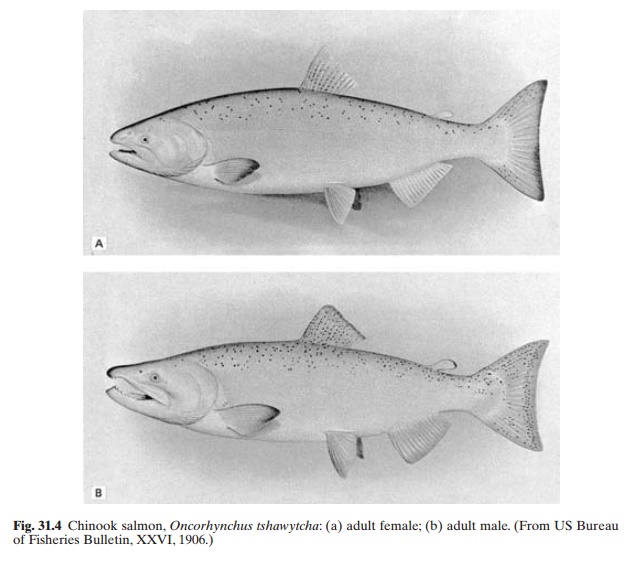 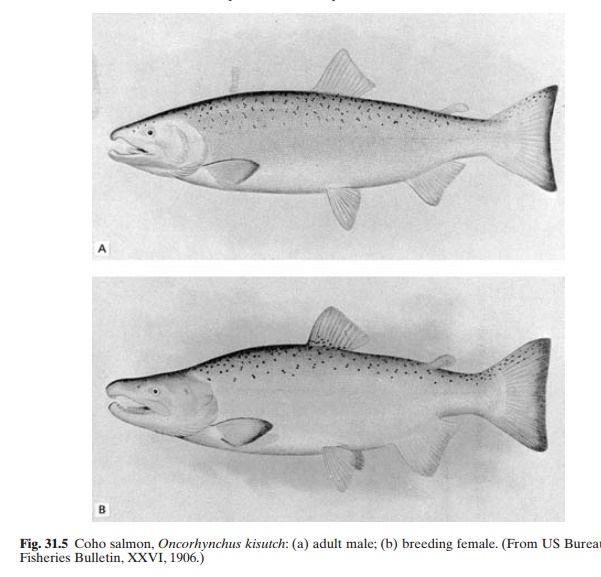 Ocean ranching of the Pacific salmon has developed into a major activity in the northwest USA, with Alaska allowing private parties to produce juvenile salmon and undertake ranching operations. The chinook salmon is reported to account for about 70 per cent of the juveniles produced, with coho forming most of the remainder. The most consistent success in ranching appears to have occurred when stocks native to the hatchery stream, and with short fresh-water rearing period, were used. Transplanted stocks may need continuous artificial recruitment to maintain satisfactory returning 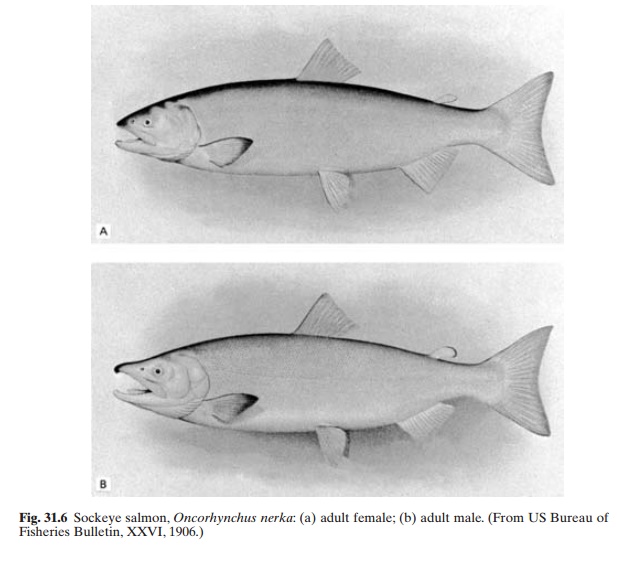 runs. Despite intermingling of stocks in marine waters, it is believed that in fresh waters each stock is adapted to a unique combination of environmental factors. The homing behaviour and genetic control over the time of maturation result in segregation into discrete stocks in space and/or time for reproduction. Though the final recognition of home waters is in response to environmental cues to which the fish become conditioned early in life, there is evidence to show that homing in salmonids is partly inherited (Raleigh, 1971; Brannon, 1972). 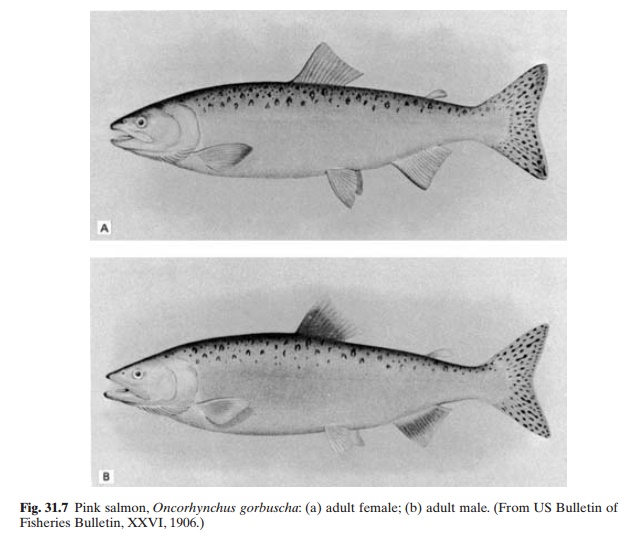 Salmon enhancement programmes in the northwest USA have been based on hatchery production of juveniles, as well as the provision of spawning channels (fig. 31.8). The artificialspawning channels were intended to supplement the natural spawning of the salmon in the rivers, where conditions were not optimum for successful spawning of larger populations. They are relatively less expensive to construct and maintain. Efforts are made to simulate conditions in the natural spawning areas of the species and to provide the prerequisites for successful spawning, in as far as they are known. A typical channel may be around 7000m in length, 4–11m in width and 10–75cm in depth.

Stability of the spawning beds is ensured by the provision of suitable substrate material of medium or fine gravel and the provisions made for diversion of flood water. The water quality, particularly oxygen content, is maintained by 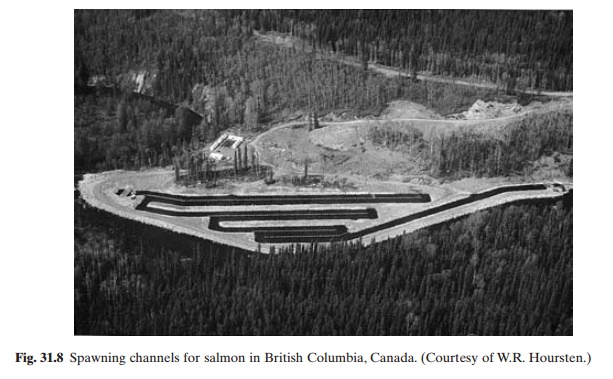 the selection of the correct gradient for the channel and the construction of baffles or other such devices. In order to avoid drying up of the spawning beds and dehydration of laid eggs during periods of drought, provision is made for pumping water into the channel or for diverting water from the main stream. The adverse effects of freezing conditions are minimized by maintaining good circulation and constant water depth and flow. Predation and fluctuation of temperature are also controlled to a very great extent.

Hatchery production of juveniles has a longer history, and although initial attempts of stocking gave inconclusive results, satisfactory returns were obtained later in a number of areas as a result of improved knowledge of the biology of the salmon and better technologies of propagation. Hatchery propagation and ranching is now accepted as an effective fishery management technique for most of the Pacific salmons. The hatchery techniques followed are described. For stocking to be effective, it is considered necessary to grow the alevins to fry or fingerling stage before release.

Several successful transplantations have been made in North America and elsewhere, and evaluations have shown that many of them have been highly successful. A strikingly successful example is the stocking of coho salmon in lakes Michigan and Superior, staring in 1966. As a result of infestation by the parasitic sea lamprey (Petromyzon marinus), many of the economically important species of fish from the lakes had diminished.

Eradication of the lamprey gave rise to the abundance of another unwanted fish, alewife (Alosa pseudoharengus). The introduction of coho salmon was to control the alewife and to develop a new sport fishery. Chinook salmon were also subsequently introduced into Lake Michigan.

Several economic evaluations have been attempted to determine the benefits of stocking hatcheryreared young. The benefit values do vary, but almost all well-organized stocking programmes have given positive results, with cost-benefit ratios ranging from 1:2.3 to 1:5.5. 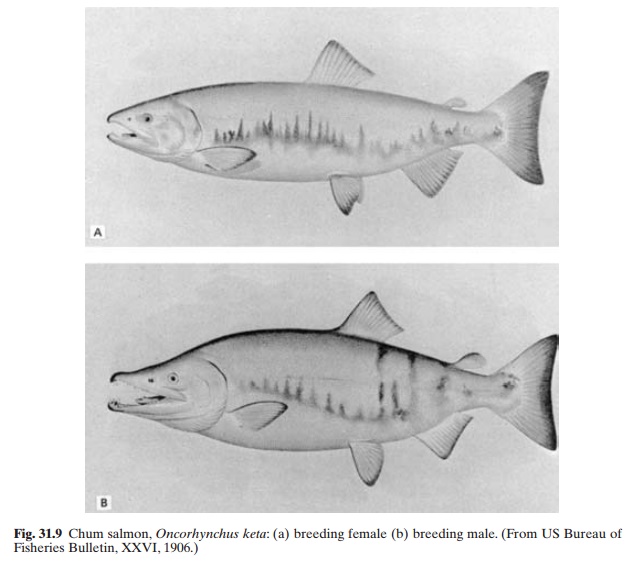 Ranching of the chum salmon (O. keta) (fig. 31.9) and the pink salmon in northern Japan is a spectacular example of the success of continued and patient efforts. Since the latter half of the 19th century, the scale of releases of hatchery juveniles has steadily increased. Hatcheries of pink and chum salmon established on Sakhalin Island by the former USSR have been releasing an equally impressive number of juveniles of the two species. At least 1.5 billion chum and 0.5 billion pink salmon are released annually from the hatcheries of northern Japan and the Sakhalin Islands. The former USSR alone was planning to increase the release of Pacific salmon juveniles to 5 billion by the year 2000. These hatcheries rely on substrate incubators, where alevins repose on gravel in shallow channels with a horizontal flow of water. Stocking densities generally range from 15000 to 30000 alevins per m2 gravel surface. The raceways are darkened to simulate conditions in the natural spawning beds.

The marine survival of hatchery-raised chum salmon from Hokkaido (northern Japan) ranges between 2 and 2.5 per cent. The rate of exploitation of hatchery fish returning to coastal waters ranges from 80 to 90 per cent and averages about 87 per cent. Adult chum salmon returning to the Sakhalin hatcheries average about 2.42 per cent of the number released. Available statistics show that an average of 81.7 per cent of the total returning run is caught in former Soviet coastal fisheries. The estimated 2.3 per cent return of hatchery chum salmon to Sakhalin is very similar to that of Hokkaido Island. The average rate of return of pink salmon to hatcheries in Sakhalin Island is about three times higher than of chum salmon. The rate of exploitation of pink salmon in the former USSR waters is held between 50 and 70 per cent in order to conserve the stocks. Marine survival of hatchery pink salmon is estimated to be in the order of 2–5 per cent. Overall economics of the ranching operation indicate that every dollar invested in hatchery production yields up to $50 in fresh salmon. The total increase of Pacific salmon landings from released juveniles is estimated to be between 50000 and 70000 tons.

The establishment of chum salmon in the Caspian Sea and of chinook and Atlantic salmon in New Zealand waters are other notable examples of successful transplanta-tions. Hatcheries located in the Baltic, White and Barents sea basins regularly release millions of young ones to enhance the salmon fisheries of the area. Chum and pink salmon transplanted from Sakhalin Island to the Barent and White seas have become fully established and pink salmon are reported in catches also from neighbouring north European countries. Several efforts are now under way to introduce Atlantic salmon in temperate countries, including Australia, but the main objective is to develop intensive cage culture of the species based on experience in Norway and Scotland. Even in north European countries, the emphasis is turning towards intensive culture rather than the release of smolts for open-water ranching. However, countries like Sweden and Iceland have succeeded in establishing homing populations of the Atlantic salmon in their rivers. Farwell and Porter (1979) described successful efforts to establish spawning populations of Atlantic salmon within inac cessible watersheds of Newfoundland in Canada, by systematic stocking with fry produced in an artificial spawning channel and upwelling incubation boxes.

A recent effort in the transplantation of salmon that has received considerable international attention is of the Pacific salmon in Chile. Encouraged by the successful introduction of chinook salmon in New Zealand in the southern hemisphere, the Government of Chile, with the cooperation of institutions and private agencies in the USA and the Government ofJapan, have been trying to transplant Pacific salmon in the country. The initial attempts to transplant chinook and coho salmon and the cherry salmon (Oncorhynchus masou) were not successful. The most encouraging results so far obtained are by a private sector company which has released several hatchery-raised coho and chinook salmon yearlings. There were good returns for chinook and only marginal returns for the coho. It is believed that the difference in return is due to the migratory patterns of the species. Chinooks are generally a shelf-hugging species, whereas coho has a more wide-ranging pattern of migration. Ocean current patterns in the area may also be affecting the survival and return of the released fish. Recently Atlantic salmon have been transplanted to Chile from Norway through private efforts, but it is mainly intended to develop intensive cage farming rather than ranching.