The main characteristic of lakes and streams, in so far as stocking is concerned, is that they have significant autochthonous populations of fish, and stocking is generally intended to enhance the economically important ones or to occupy ecological niches in the fauna.

The main characteristic of lakes and streams, in so far as stocking is concerned, is that they have significant autochthonous populations of fish, and stocking is generally intended to enhance the economically important ones or to occupy ecological niches in the fauna. Unlike newly formed reservoirs, these natural water bodies have more or less stabilized ecosystems and therefore call for appropriate studies to determine the need and desirability for stocking. Although there are several instances where natural lakes have been stocked and managed along the same lines as reservoirs, as described above, it would appear that the majority of enhancement programmes in lakes and streams have been for establishing or augmenting sport fisheries.

The introduction of the rainbow and brown trout in streams in several countries for sport fisheries has already been referred. In order to maintain an adequate population of the species in the trout streams, hatcheries and nursery farms are established in suitable sites with a plentiful supply of clean water of the right temperature. The improvement of streams to ensure good quality water and the production of the natural food of trouts and implementation of the regulations regarding the size and number of fish that an angler can catch are some of the management measures taken to maintain the trout stocks. Though there are not many cases of established self-perpetuating populations of trout outside their natural range of distribution, it has been possible to maintain small populations through continued stocking of hatchery-produced young in many streams. Exceptions are some of the rivers in Canada and the Falkland Islands, where breeding populations have established.

Large-mouth bass, Micropterus salmoides, is an important sport fish in the USA and among the management measures adopted are regular stocking and balancing of its populations with those of forage species. When forage species such as the black crappie (Pomoxis nigromaculatus) blue gill (Lepomis macrochirus)and golden shiners (Notemigonus crysoleucas) overcrowd a lake, corrective restocking has to be undertaken.This involves the stocking of fingerling large-mouth bass, following a marginal or sectional treatment with a fish toxicant like rotenone or Fintrol-S. A stocking rate of 60–120 fingerlings per ha is generally adopted. If over-crowding of black crappie or golden shiners(which spawn before large-mouth bass) occur, ‘early spawned’ large-mouth bass may be stocked at the rate of 125–250 per ha. An alternative management measure, when the lakes show a trend towards a crowded forage condition or have been heavily fished, is to stock large-mouth bass of 20–25cm length. The lakes are closed to bass fishing for at least one month after stocking, as the hatchery-reared bass are extremely susceptible to hook and line.

Generally an annual harvest quota is enforced on the basis of catch records and population estimates. The introduction of additional forage species like the threadfin shad, Dorosoma petense, has very often resulted inincreased bass fishing in lakes deficient in forage fish. The channel catfish (Ictalurus punctatus) and sometimes the white catfish (I. catus)are stocked in the lakes as additional sport fish to take some of the fishing pressure off large-mouth bass. They are usually stocked at the rate of 250 per ha.

The pike Esox lucius is another important game fish, especially in Europe (fig. 31.1), and its artificial propagation is practised in a number of countries for stocking lakes and other water bodies. Besides being a sport fish, the pike is considered to be a valuable fish to reduce coarse fish populations in lakes, as it is a voracious carnivore. Pikes spawn from February to the end of May, when the water temperature is about 8–10°C. In nature they spawn in shallow grassy waters. Brood fish can be caught from the neighbourhood of such areas, held in special brood ponds and fed on coarse fish. In small sheltered ponds, supplied with spring water of constant temperature, male and female pikes readily mature and spawn. Normally a female spawns about 20000–25000 eggs per kg. Incubation and hatching of eggs are generally carried out in large Zoug jars. Each jar (60–70cm in height and 15–20cm diameter) will carry between 1 and 5l eggs. Other types of hatchery jars can also be used. The best temperature for hatching pike eggs is between 8 and 15°C. Artificial fertilization of pike eggs can be carried out in more or less the same way as for salmonids. Pike eggs are smaller in size (2.5–3mm in diameter) and more delicate and should be handled with special care. The incubation period is about 120 degree-days. Just before hatching, the embryos are removed to hatching trays similar

to those used for salmonids, but with holes less than 2mm in diameter. The absorption of the yolk sac takes about 160–180 degree-days. When the yolk sac is fully absorbed, the larvae are released into the lake.

It is reported that if postlarvae are stocked, a survival of ten per cent can be expected. In order to minimize mortality after stocking, it is preferable to stock fingerlings, as with all other species used for repopulation. But the main problem is that pikes require live food from the post-larval stage onwards and from the time they reach 6–10cm they are highly carnivorous. Because of this, the fry are reared in troughs for three to four weeks, fed on zooplankton collected from natural waters in sufficient quantities to avoid cannibalistic tendencies. Troughs made of concrete or other durable material can be stocked with up to 2500 larvae per m3 and will give about 60 per cent survival. The fry are then transferred to rearing ponds and are harvested in six to eight weeks, by the end of April. The rearing ponds are similar to carp ponds. Sometimes carp ponds themselves are used for pike rearing in rotation with carp. Under normal conditions, 10000–25000 fry are stocked per ha and the average survival is about 20 per cent.

Pike perch is another important carnivorous fish of equal importance as a sport fish and also as a food fish in Europe (fig. 31.2). They are well-suited for stocking lakes and grow rapidly, reaching a weight of up to 1kg in about three years. They spawn in the spring, when the temperature is 12–16°C. The male digs shallow nests on sandy or gravel beds in shallow areas. Eggs are laid on roots of aquatic plants placedin the nest. A female weighing about 1kg can lay about 200000 eggs, which stick to the substratum. The brood fish watch over the fertilized eggs, which hatch after 8–10 days at temperatures of 11–14°C. 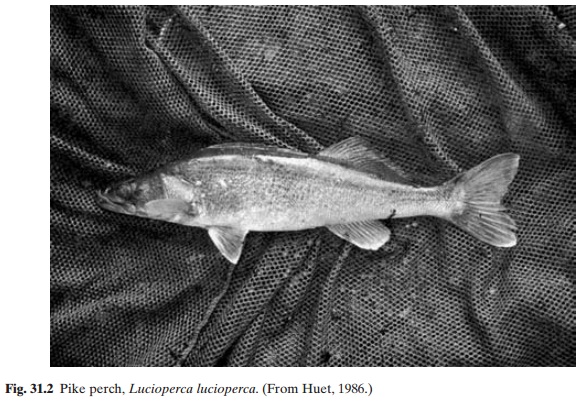 Under culture conditions, selected brood fish are liberated in spawning ponds (very often spawning ponds of carp are used) where artificial nests are placed. These nests are made of wire netting on a wooden frame and attached to it are small roots of willow, alder or water plants on which the fish can deposit the eggs. Several designs of nests, in particular one with a canopy of roots, have been used. Soon after the eggs are laid, the nests are transferred to hatching ponds. Eyed eggs can be transported long distances. Fertilized eggs can also be transferred to open waters in perforated hatching boxes, from which the hatched larvae can escape directly into the lake. However, it is necessary to grow them for a few weeks at least to obtain a higher survival rate. The larvae should be reared in nursery ponds with a dense growth of zooplankton, such as rotifers and cyclops. Fry of 15mm will eat insect larvae, plankton and benthic fauna. In the absence of forage fish, they become cannibalistic at a size of about 4cm. Since feeding them after this stage is difficult, they are usually stocked in open waters at this point.

Besides pike and pike perch, species of coregonids, especially Coregonus albula and Coregonus lavaretus, are propagated on a limitedscale for stocking alpine oligotrophic lakes in Europe. The methods of propagation are very similar to those of pike. The brood fish are collected from the natural spawning grounds in the lake. Coregonus albula breeders may weigh between 30 and 200g, while C. lavaretus can vary from 1 to 3kg. A female of C. albula gives from 2000 to 10000 eggs and C. lavaratus 10000 to 19000 eggs per kg weight. Artificial fertilization is carried out in exactly the same way as for salmonids and the incubation is performed in Zoug or MacDonald jars. The eggs can be left to hatch in the jars and take between 300 and 360 degree-days, at a low hatching temperature of 5°C. The hatchlings measure only about 10mm in length and 1mm in diameter. Core-gonid fry have very small yolk sacs, which are rapidly absorbed in about three to five days after hatching. They are usually stocked soon after the yolk sacs are absorbed, and so the survival rate is low, between 1 and 10 per cent. It is not too clear whether such stocking operations are economically justifiable.

Though an anadromous species, the transplantation of ayu (Plecoglossus altivelis) as practised in Japan is essentially a stocking operation, rather than ranching. No reproduction is expected from the stocked fish as most surviving fish are caught as adults by sport or commercial fishermen during the year of release. This is largely because its entire life span, including the migration to the sea and return, is completed within a year and the rate of recapture is very high.

The construction of a series of dams across rivers has prevented the upward migration of ayu and greatly reduced its living areas. This, along with pollution, has resulted in a considerable decline in ayu populations. Being a very popular object of river fishing and a highly priced food fish, continued efforts have been made to resuscitate the stocks and maintain the catch at an increasing level. This has been accomplished by regular stocking of fry. According to one estimate, not less than 266 tons of fry are stocked in the rivers. In the past, Lake Biwas was the main source of fry, but now fry from the foreshore areas near the spawning grounds of the fish, and also fry from the river when they start ascending, are caught for stocking.When stocked, the lake form of fry gives the highest survival rate, the next best being the river-run fry (those collected from the river). However, the collection of fry from all thesesources are still not able to fulfil the increasing demand. Techniques for artificial propagation and rearing of ayu fry have therefore been developed and this is expected to help in meeting the increased demand, including the requirements of pond culture of the species.

The sea-run fry have to be conditioned for several days to acclimatize them for transfer to fresh water. This is done by holding them initially in ponds filled with 1 part sea water to 4 parts fresh water, and after a day or two transferring them to fresh water. They are held in fresh water for five to seven days before ship-ment for release. The river and lake-run forms are also held in fresh water for a time to empty their guts for transportation. Special transport containers are used to transport the fry in water saturated with oxygen. It is believed that a medicated bath during transport will result in higher survival rates.

The rate of recapture after stocking varies widely (depending on the nature of the river), ranging from 10 to 80 per cent, but usually between 40 and 60 per cent. In most rivers the fish reach lengths of 20–22cm about five months after stocking.