The primary phloem of monocotyledons and is described. As with secondary xylem, secondary phloem has both axial and radial ar-rangements of cells.

The primary phloem of monocotyledons and is described. As with secondary xylem, secondary phloem has both axial and radial ar-rangements of cells. The same initials in the cambium which divide to form xylem to their inner side also cut off phloem cells to their outer side. Some-times growth rings can be seen.

In gymnosperms, the axial phloem consists of sieve cells and parenchyma cells, some of which become albuminous cells (see Fig. 5.5); some gymno-sperms have fibres in the phloem as well. The homocellular rays are nor-mally uniseriate. There is often very little wall thickening but sclerification can take place. The outermost phloem layers either become compacted, or are incorporated into the ‘bark’ or rhytidome. 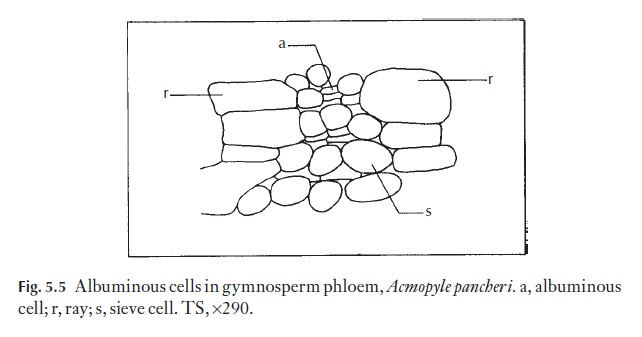 The phloem cells of dicotyledons show evidence of evolutionary trends similar to those of the xylem. The sieve areas, which are areas of dense pit-ting in lateral walls of sieve cells, are a feature of the more primitive dicoty-ledons. Well-organized sieve plates, simple and transverse, situated at either end of the sieve tube members are considered to be advanced. Oblique, compound sieve plates also occur (Fig. 3.16); sometimes these are found in advanced genera such as Quercus and Betula, and also in lianes, for example Vitis, where physiological demands may call for large areas of sieve platewhich are necessary for rapid, long-distance translocation of materials. Perhaps the best example of this is to be found in Cucurbita maxima, water-melon, where massive compound sieve plates are found in the peduncle of the fruit where high volumes of assimilate are being translocated. Even in 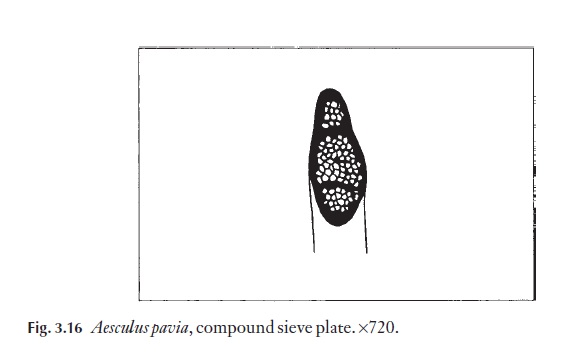 Companion cells, usually much narrower than the sieve tube member to whom they are adjacent, are a feature of dicotyledon phloem. Their counterpart in the gymnosperms is thought to be the albuminous cell. Companion cells are nucleate whilst sieve tube members are not. Killing a companion cell appears to prevent the adjacent sieve element from translo-cating, so the function of the companion cells seems in part to be regulation of the physiological activities of the sieve elements. The axial system of sec-ondary phloem often contains parenchyma, idioblastic cells (idioblasts, cells of a particular distinct type dispersed in another tissue), sclereids and fibres. In some species, sclereids and fibres are absent from the functioning phloem, but differentiate at a later stage. Fibres often alternate, in bands, with conducting cells, for example in Tilia and various Malvaceae (Fig. 3.17). Primary phloem fibres of Linum (flax) are of economic importance.

The rays within phloem may be either homocellular or heterocellular. In some species they remain of even width, but in others they may become wider towards their outer ends (e.g. Tilia). The rays may be uniseriate to multiseriate. As in secondary xylem, the secondary phloem may be storied; naturally, the storied arrangement originates from the storied cambium in these plants. Laticifers (cells containing latex) and lysigenous cavities of various kinds may occur in the phloem. 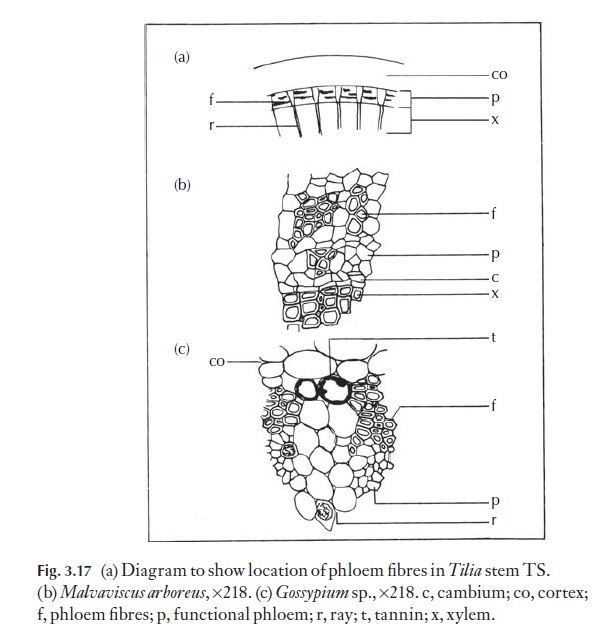 The application of phloem anatomy in taxonomy has not been of such widespread interest as might be expected. The partially sclerified, often highly crystalliferous tissue is difficult to section well. This has put off many people! When phloem tissues form part of the rhytidome they have been more intensively studied than when they are distinct from the rhytid-ome, and a number of valuable contributions exist on ‘bark’ anatomy. In root identification work, the bark of secondarily thickened roots provides data that complement those from the xylem.

The other area of applied study is in relation to diseases of the phloem. The normal structure of functioning phloem must be understood before disease symptoms can be interpreted, or the effects of chemical treatments defined.