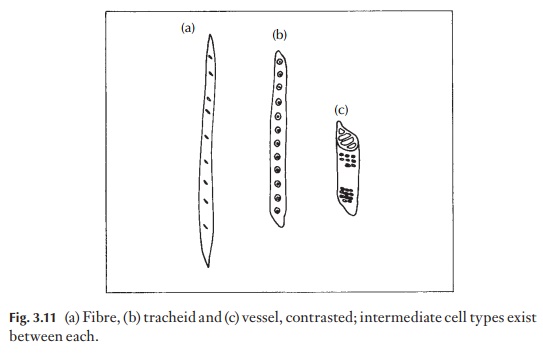 It is generally accepted that secondary xylem has undergone a long evolu-tionary history. The main trends can be seen because the various stages are often related to other ‘marker’ characters in flowers, fruits, etc. of the plants concerned, or in molecular markers.

It is generally accepted that secondary xylem has undergone a long evolu-tionary history. The main trends can be seen because the various stages are often related to other ‘marker’ characters in flowers, fruits, etc. of the plants concerned, or in molecular markers. There are instances where habitat has seemingly reversed some of these trends in various species, but overall, their ‘direction’ can be fairly safely defined.

Taken in its simplest form, the evidence to hand indicates that the trac-heid, a dual purpose cell combining properties of both mechanical support and water conduction, in evolving groups of plants gave rise to fibres with simple mechanical function and to perforate cells, the vessel elements, con-cerned with the conduction of water and dissolved salts (Fig. 3.11). This di-vision of labour is seen as a specialization, or advance. Most angiosperms still have tracheids, as well as fibres and vessel elements. 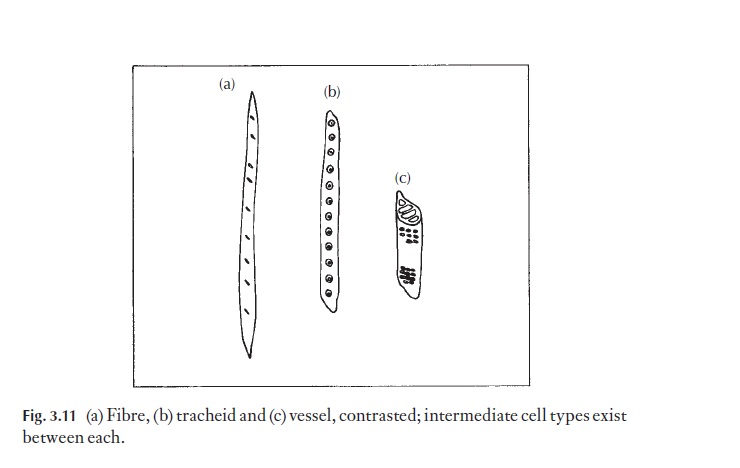 The primitive vessel element shows much similarity to the tracheid; it is axially elongated, with oblique end walls in which are grouped perforations making up the scalariform, reticulate or otherwise compound perforation plates. The lateral walls bear bordered pits, often in an opposite arrange-ment. The advanced vessel element is seen as a broad short cell with large, simple transversely arranged perforation plates at both ends and alternat-ing bordered pits on the lateral walls. Between these extremes is a variety of

forms (Fig. 3.5). Vessel elements are found in axial files, and a strand of them constitutes a vessel. The terminal vessel elements in a vessel have an imper-forate wall at their extremities, but a perforated end wall where in contact with the vessel element next in line. 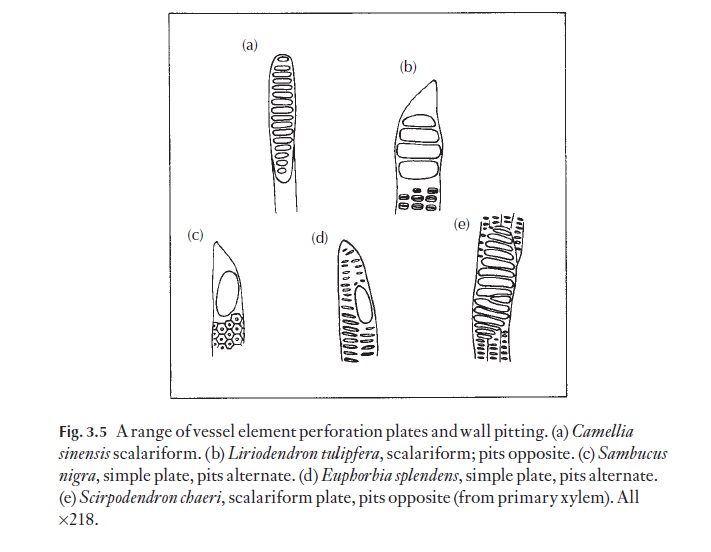 In the monocotyledons, where xylem is entirely primary, the vessel ele-ment probably evolved first in roots, then in stems and finally in leaves. Evi-dence for this is found in many plants. There is no record of a species being found with vessels in the leaves only, and not in the roots.

There are some flowering plants which have been considered to be primi-tive because of floral characters, and which are vessel-less (e.g. Drimys, Winteraceae/Magnoliales, among the dicotyledons). However, recent evi-dence indicates that vessels have been lost in these species.

Confidence in the evolutionary sequence is such that characters of the vessel elements have often been used as an indicator of the relative phylogenetic advancement of plants. Measurements of vessel element length and width must be made on a statistically sound basis for such com-parisons. It has been found that a ratio of vessel element length to tangential width produces a useful figure for application in advancement indices. There are many pitfalls in this method. Great care must be taken in ensur-ing that comparisons are made between plants growing in fairly similar conditions, since habitat can influence the vessel diameter. There can also be a degree of natural variability, which must be accounted for in sample size. Comparisons between the trends in families or genera are naturally more reliable than those between species. Overall trends in orders are again of more significance. So, even in the detailed measurements of fibres, trac-heids and vessel elements, we see features which can be applied in evolu-tionary terms, or used when we are attempting to establish the possible origin of a group of plants. For example, it would be unlikely that mono-cotyledons with vessels in root, leaf and stem would be ancestral to those with vessels in the root only. These data are of considerable interest in phylogenetics.

The appearance of rays in the TLS is also important in systematics. From this plane of section it is easiest to see just how many cells make up the width of the rays. What may have appeared to be a wood with two ray widths from the TS could have rays with a wide, multicellular central region and elon-gated uniseriate tails. Cutting such rays at different heights in TS would give a misleading appearance. The overall height of a ray can be determined with certainty only from the TLS.

Some woods have their rays and fibres arranged in regular horizontal rows as viewed in TLS. This storied type of wood gives a particular ‘figure’ to planks, and is often of decorative value. Many of the Leguminosae are like this.

Unfortunately, it is rarely possible to say which particular anatomical features of a wood make it suitable for specific mechanical uses, although the presence of tyloses makes woods particularly useful for liquid contain-ers.

In ring porous woods, for example, it seems that the number of growth rings to the centimetre is often of relatively more importance than histo-logical details.

Evenness of texture or straightness of grain are features which belong to certain woods. Lime, Tilia spp., and pear, Pyrus spp., for example, have properties which make them good for carving; the wood cuts well in any di-rection. Ash, Fraxinus, and hickory, Carya, have a straight grain and are re-silient, and are chosen for axe and tool handles. Long fibres or tracheids are one of the requirements for making certain types of paper. Softwoods (con-ifers) without resin canals are usually preferred to hardwoods for pulping for this reason.

Light (less dense) woods with cells having moderately thickened walls are often more resilient and recover their shape better after denting than more dense woods. The cricket bat willow, Salix alba varcaerulea, is such a wood. Many woods with good resistance to decay contain oils, gums or resins. Teak, Tectona grandis, is a good example and was extensively used in boat building. Bulnesia sarmienti has gums and resins which produce an incense. Cinnamomum camphora is the source of natural camphor.

Spruce, Picea sp., has good resonating qualities and is widely used in the resonating chambers of stringed instruments. Oaks, Quercus spp., were ex-tensively used in buildings and boats since the time of Iron Age people. Oak can be split, using wedges, along lines of weakness formed by the broad rays, and planks or posts can be formed with simple tools. 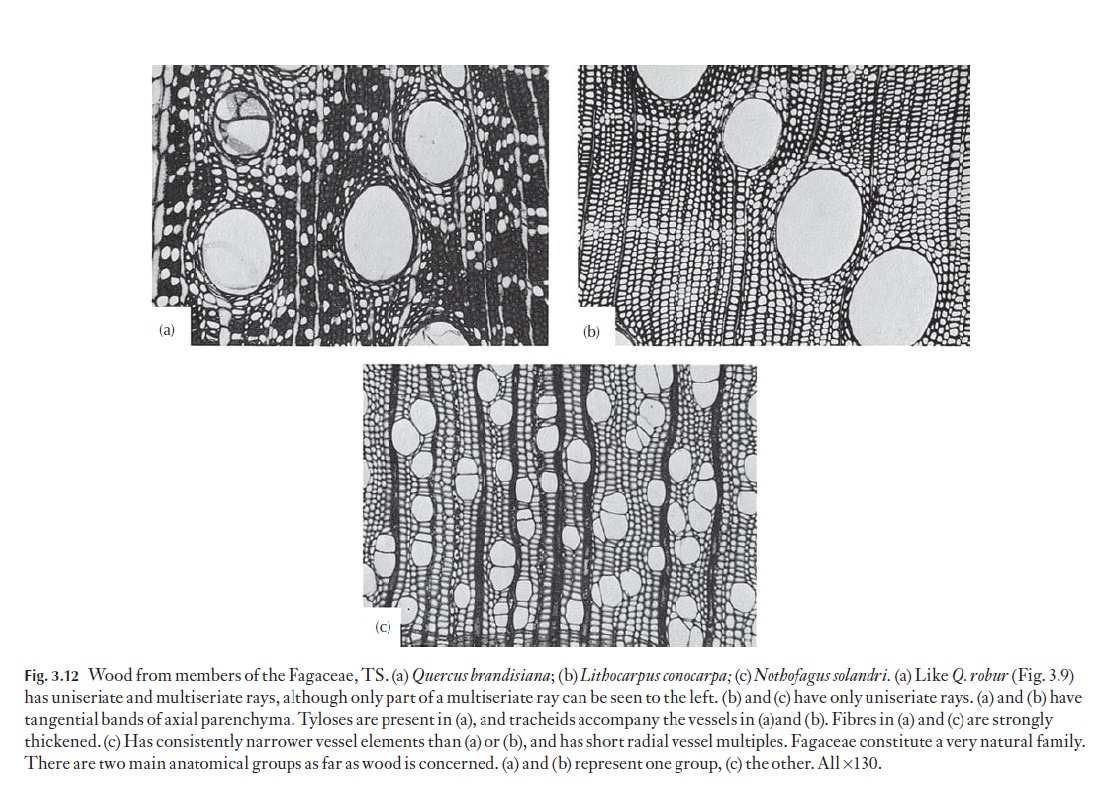 A range of types of wood is illustrated in Figs 3.12–3.15. These are chosen to demonstrate variations in vessel, fibre and parenchyma distribution and in ray type. Several excellent general books exist on wood anatomy, and there are many volumes on woods from particular parts of the world. Some of these are listed at the end of this book. The International Association of Wood Anatomists has published an illustrated glossary of the cell types and their arrangements for angiosperm woods. Metcalfe and Chalk (Anatomy ofthe Dicotyledons, Vol. II, 1983) lists the occurrence of a range of xylem char-acters in various taxa. 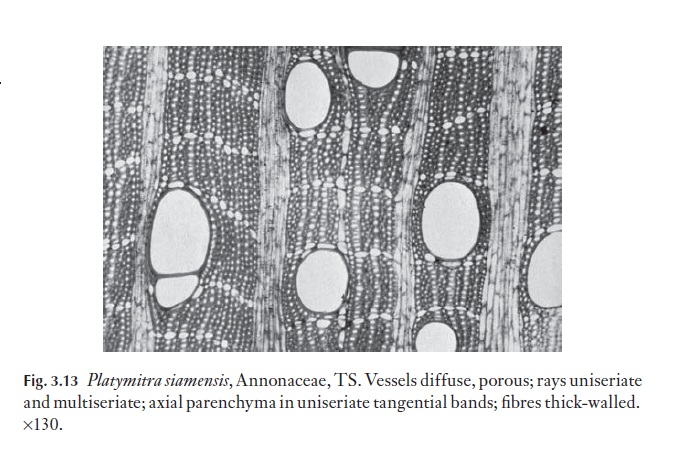 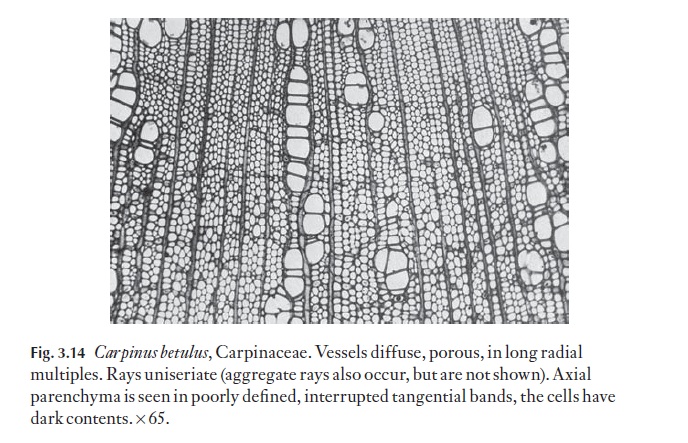