Structure of courts in India

There are three different levels of courts in our country.

Structure of courts in India

There are three different levels of courts in our country. 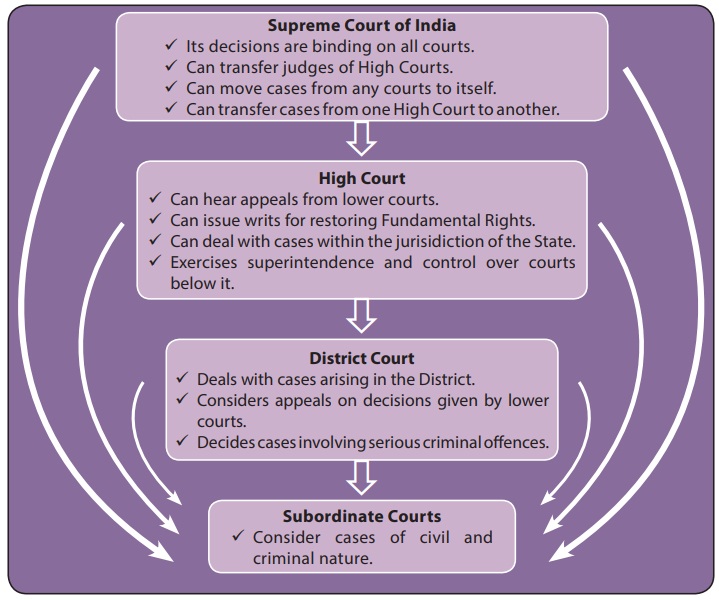 Lok Adalat: Lok Adalat was set up to provide speedy justice. It hears and settles the disputes in the language of the people in the public presence. A Lok Adalat is presided over by a retired judge along with a lawyer and a social worker. Cases are put forward without advocates. These cases are solved through mutual consent. The first Lok Adalat was held on 1982 at Junagadh of Gujarat.

Fast Track courts: These courts were established in the year 2000 with an aim to clear the long pending Sessions and other lower judicial cases.

Tele Law Initiative: To provide legal aid and service to the people in rural areas, the Tele Law Initiative was launched by the Ministry of Law and Justice in collaboration with the Ministry of Electronics and Information Technology. People can seek legal advice from the lawyers through video conferencing available at the common service centre on the ‘Tele Law’ Portal – a technology enabled platform.

Mobile courts: Mobile courts will be of great relief to the rural people. It would create greater awareness about the judicial system among the rural masses, cut costs for them and render justice as their doorstep.

E–Courts: The E–Courts project was established in 2005. According to the project all the courts will get computerised. Judicial service centre is the part of e-court. The public as well as the advocates can ask directly the case status and next hearing dates with free of cost.

NALSA – The National Legal Service Authority has been constituted under the Legal Services Authorities Act, 1987 to provide free Legal Services to the weaker sections of the society and to organise Lok Adalats for amicable settlement of disputes.