Chris was a little boy who enjoyed going to school and doing all sorts of things except art and writing.

Chris was a little boy who enjoyed going to school and doing all sorts of things except art and writing. Using brushes and pencils was not easy for him. So, his artwork was never a happy ending, and he would give up quickly. 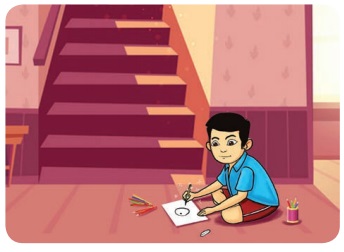 But one day Chris found a pencil of such lovely colours that he could not resist and he tried to draw a circle. As always, it did not go well, he was about to throw the pencil away. Just then, his drawing began to speak to him.

"Hey! Are you going to leave me like this? At least draw me a pair of eyes," said the drawing. Chris was shocked, but he managed to draw two little spots inside the circle.

"Much better, now I can see myself," said the circle, looking around at itself. "Ahh! What have you done to me?"

"OK. No problem.", said the drawing. "I am sure that if you try again, you’ll do better. Go on, rub me out!" So, Chris erased the circle and drew another one. Like the first one, it was not very round.

"Hey! You forgot my eyes again!" 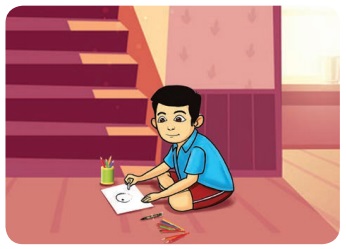 "Hmm, I think I’m going to have to teach you how to draw until you can do me well," said the circle with its quick, squeaky little voice.

Chris, who was still shocked, thought that this was a good idea. He immediately found himself drawing and erasing circles. The circle would not stop saying "Rub this out, but carefully; it hurts," or "Draw me some hair, quickly, I look like a lollipop!" and other funny remarks.

After spending the whole afternoon together, Chris could now draw the little figure much better than most of his classmates. He was enjoying it so much that he did not want to stop drawing with this crazy new teacher of his. Before going to bed that night, Chris gave his new teacher a hearty thank you for teaching him to draw.

"But I didn’t do anything!" answered the little drawing.

"Don’t you see that you’ve been practising a lot, and enjoying it all the while? I bet that’s the first time you’ve done that!"

Chris stopped to think. The truth was that he had drawn so badly because he had never practised more than ten minutes at a time. He had always done it angrily. So, what the little drawing had said was correct.

"You are correct, but, thank you," he said. He carefully kept the pencil in his school bag before going to sleep. 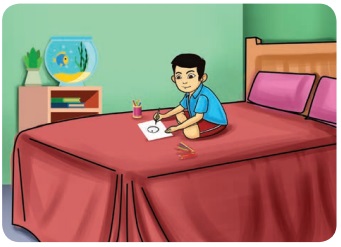 The next morning Chris jumped out of bed and went running to find his pencil, but it was not there. He searched everywhere, but there was no sign of it. The sheet of paper on which he had drawn the little figure, although still full of rubbing out marks, was completely blank. Chris was worried, and he did not know if he had spent the previous afternoon talking with the little man or whether he was dreaming all of it.

So, to settle the matter, he took a pencil and paper and tried to draw a little man.

Think: Say whether he can draw well now. If yes, why?

Yes, he can draw well now because he had been practising hard. His continuous practice helped him to draw well now.

It turned out not bad at all, except for a couple of rough lines. He imagined his little teacher telling him to rub and fix them. Chris gladly rubbed out those bits and redrew them. He realised that the crazy little teacher had been right: it made no difference whether you had the magic pencil or not. 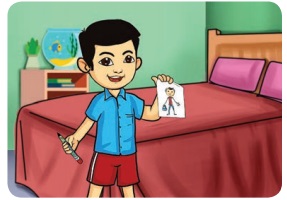 To learn to do things, you only needed to keep trying and to enjoy while doing so.

From that day on, whenever Chris tried to draw or paint, or do anything else, he always had fun imagining his drawing telling him "Come on, my friend, do me a bit better than that! I can’t go out looking like this!"