It has advantages of it continual reduction in the price per mega byte of high-capacity storage. It has high capacity and available in low cost.

In this section let us concentrate on magnetic disk I/O subsystems most applicable to multimedia uses.

ST506 and MFM Hard drives: ST506 is an interface that defines the signals and the operation of signals between a hard disk controller and the hard disk. It is developed by seagate. It is used to control platter speed and the movement of heads for a drive. Parallel data is converted to a series of encoded pulses by using a scheme called MFM (modified frequency modulation). The MFM encoding scheme offers greater packing of bits and accuracy than the FM encoding scheme. Other encoding scheme is Run-Length-Limited. Its drive capacity varies from 20 M Bytes to 200 M Bytes.

The interface is 16 bit parallel data interface. The IDE interface supports two IDE drives. One is master drive and other is slave drive. Here, Jumper setting is required. The transfer rate is 8 MHz at bus speed.

This new interface has a transfer rate of 9-13 M Bytes/See with maximum capacity around 8 GB. It supports upto four drives CD ROM and tape drives.

It is an ANSI X3T9.2 standard which supports SCSI and SCSI2 Standards. The Standard defines both software and hardware.

Nine control signals define the activity phases of the SCSI bus during a transaction between an initiator and a target. The phases are:

Arbitrary Phase: In this phase an initiator starts arbitration and tries to acquire the bus.

Selection Phase: In this phase, an initiator has acquired the bus and selects the target to which it needs to communicate.

Command Phase: The target now enters into this phase. It requests a command from the initiator. Initiator places a command on the bus. It is accepted by the target.

Data Phase: The target now enters in this phase. It requests data transfer with the initiator. The data is placed on the bus by the target and is then accepted by the initiator.

Status Phase: Now, the target enters in status phase. It indicates the end of data transfer to the initiator. Message Phase: This is the last phase. It is to interrupt the initiator signaling completion of the read message. The bus free phase is a phase without any activity on the bus so that the bus can settle down before the next transaction. SCSI-l transfers data in 8-bit parallel form, and the transfer rate vades rom I M Bytes/See to 5 M Bytes/Sec. SCSI-I'drive capacity varies from 20 M bytes to 2 GB. SCSI-1 has over 64 commands specified to carry out transactions.

Commands include read, write, seek, enquiry, copy, verify, copy and verify, compare and so on.

It has the same aspects of SCSI -1, But with faster data transfer . rates, and wider data width.

It includes few more new commands, and vender-unique command sets for optical drives, tape drives, scanners and so on. To make the bus wider, a system designer uses a second 68-pin connector in addition to the standard 50 pin connector.

Rotational Latencies: To reduce latency, we use two methods. They are:

(ii) Interleaving factor: It keeps up with the data stream without skipping seccors. It determines the organization of sectors.

Transfer Rate and I/O per Second: I/O transfer nite varies from 1.2 M bytes/Sec. to 40 M bytes/Sec. Transfer rate is defined as the rate at which data is transferred from the drive buffer to the host adapter memory.

Figure below shows the relationship between seek latency, Rotational latency and Data transfer

It is a method of attaching multiple drives to a single host adapter. The data is written to the first drive first, then after filling it, the controller, allow the data to write in second drive, and so on. Meantime Between Failure (MTBF) = MTBF of single/drivel Total no. of dr

It is an alternative to mass storage for multimedia systems that combines throughput speed and reliability improvements.

RAID is an array of multiple disks. In RAID the data is spread across the drives. It achieves fault tolerance, large storage capacity and performance improvement.

If we use RAID as our hot backups, it will be economy. A number of RAID schemes havebeen developed:

There are six levels of RAID available.

RAID level 0 provides performance improvement. It is achieved by overlapping disk reads and writes. Overlapping here means, while segment I is being written to drive 1, segment 2 writes can be initiated for drive 2.

The Disk mirroring causes two copies of every file to be written on two separate drives. (Data redundancy is achieved).

These drives are connected to a single disk controller. It is useful in mainframe and networking systems. Apart from that, if one drive fails, the other drive which has its copy can be used.

Reading can be speeded up by overlapping seeks.

Data (written one bit at a time) is bit interleaved across multiple drives. Multiple check disks are used to detect and correct errors.

It provides the ability to handle very large files, and a high level of integrity and reliability. It is good for multimedia system. RAID Level 2 utilizes a hamming error correcting code to correct single-bit errors and doublebit errors.

(i) It requires multiple drives for error correction (ii) It is an expensive approach to data redundancy. (iii) It is slow.

Uses: It is used in multimedia system. Because we can store bulk of video and audio data.

The difference between RAID 2 and RAID 3 is that RAID 3 employs only parity checking instead of the full hamming code error detection and correction. It has the advantages of high transfer rate, cost effective than RAID 2, and data integrity.

RAID Level-5 Block Interleaving: In RAID LevelS, as in all the other RAID systems, multiple drives are connected to a disk array controller.

A RAID 5 system can be designed with a single SCSI host adapter with multiple drives connected to the single SCSI channel.

CD ROM, WORM (Write once, Read many) and rewritable optical systems are optical drives. ·CD-ROMs have become the primary media of choice for music due to the quality of ,sound. WORMs and erasable opticel drives both use lasers to pack

information densely on a removable disk.

Optical Media can be classified by technology as follows:

It consists of a polycarbonate disk. It has 15 mm spindle hole in the center. The polycarbonate substrate contains lands and pits.

The space between two adjacent pits is called a land. Pits, represent binary zero, and the transition from land to pits and from pits to land is represented by binary one.

The polycarbonate substrate is covered by reflective aluminium or aluminium alloy or gold to increase the reflectivity of the recorded surface. The reflective surface is protected by a coat oflacquer to prevent oxidation. A CD-ROM consists of a single track which starts at the center from inside and spirals outwards. The data is encoded on this track in the form of lands and pits. A single track is divided into equal length sectors and blocks.

Each sector or block consists of2352 bytes, also called a frame. For Audio CD, the data is indexed on addressed by hours, rninutes, seconds and frames. There are 75 frames in a second. 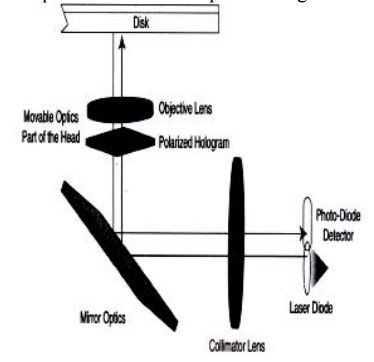 CD-ROM Standards : A number of recording standards have emerged for CD-ROMs. They are:

CD-DA (DD-Digital Audio) Red Book: CD-ROM is developed by philips and sony to store audio information. CD-DA is the basic medium for the music industry.

The standard specifies multiple tracks, with one song per track. One track contains one frame worth of data: 2352 bytes. There are 75 frames in a second. Bandwidth = 176 KB/s.

The Mode 2 Yellow Book standard was developed for compressed audio and video applications where, due to lossy compression, data integrity is not quite as important. This standard maintains the frame stmcture but it does not contain the ECC/EDC bytes. Removing the ECC/EDC bytes allows a frame to contain an additional 288 bytes of data, resulting in an increase of 14% more data. The frame stmcture is shown in the Table below:

XA stands for Extended Architecture. The standard was created for extending the present CD-ROM format.

This standard defines an optional pre-mastered area conforming to the Red, Yellow or Green book standards for read-only, and a recordable area. It utilizes a read/write head similar to that found in magnetooptical drives. We can combine the pre-master multimedia objects as the base and develop their own versions.

This standard allows writing data once to a writeable disk. Here, the CD contains a polycarbonate substrate with pits and lands.

The polycarbonate layer is covered with an organic dye recording layer.

As in CD-ROM construction, the track starts from the center and spirals outwards. CD-R uses a high powered laser beam. The laser beam alters the state of the organic dye such that when the data is read, the altered state of dye disperses light instead of reflecting it. The reflected beam is measured for reading the state of each bit on the disk.

Mini-Disk for Data is known as MD-Data. It was developed by Sony Corporation. It is the data version of the new rewritable storage format. It can be used in three formats to support all users.

A recordable magneto-optical disk. A hybrid of mastered and recorded.

Its size is 2.5 inch. It provides large capacity. It is low cost. It is used in multimedia applications.

It records data using a high power laser to create a permanent burnt-in record of data. The laser beam makes permanent impressions on the surface of the disk.

It creates pits. Information is written once. It cannot be written over and cannot be erased. i.e., Here data cannot be edited.

Recording of information: During recording, the input Signal is fed to a laser diode. The laser beam from the laser diode is modulated by the inpUt signal. It switches the laser beam on and off. if the beam is on, it strikes the three recording layers.

The beam is absorbed by the bismuth-tellurium layer. Heat is generated within the layer. This heat diffuses the atoms in the three recording layers. It forms four-element alloy layer. Now, the layer becomes recorded layers.

During disk read, a weaker, laser beam is focused on to the disk. It is reflectted back. The beam splitter mirror and lens arrangement sends the reflected beam to the photo detector. The photo sensor detects the beam and converts it into an electrical signal. 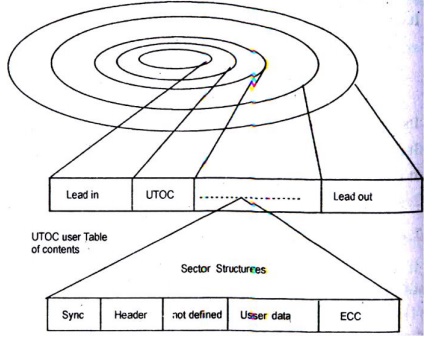 It uses a combination of magnetic and laser technology to achieve read/write capability. The disk recording layer uses a weak magnetic field to record data under high temperature. High temperature is achieved by laser beam.

When the beam is on, it heats the spot on the magneto optical disk to its curie temperature. The rise in temperature makes the spot extra sensitive to the magnetic field of bias field.

Magneto-optical drives require two passes to write data; in the first pass, the magneto optical head goes through an erase cycle, and in the second pass, it writes the data.

In phase change technology the recording layer changes the physical characteristics from crystalline to amorphous and back under the influence of heat from a laser beam.

To read the data, a low power laser beam is transmitted to the disk. The reflected beam is different for a crystalline state than for an amorphous state. The difference in reflectivity determines the polarity of the spot.

Benefits: it requires only one pass to write.

There is no need of magnetic technology here.