There are large number of formats and standards available for multimedia system. Let us discuss about the following file formats:

This format extends the range of information from one word processor application or DTP system to another.

The key format information carried across in RTF documents are given below: Character Set: It determines the characters that supports in a particular implementation.

Font Table: This lists all fonts used. Then, they are mapped to the fonts available in receiving application for displaying text.

Color Table: It lists the colors used in the documents. The color table then mapped for display by receiving application to the nearer set of colors available to that applications.

Special Characters: It includes hyphens, spaces, backslashes, underscore and so on

It offers the following formats:

The additional formats are:

TIFF files consists of a header. The header consists of byteordering flag, TIFF file format version number, and a pointer to a table. The pointer points image file directory. This directory contains table of entries of various tags and their information. 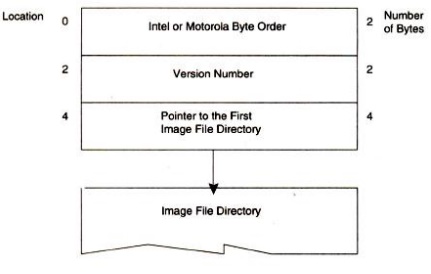 The first two bytes of each directory entry contain a field called the Tag ID.

It has five classes

1. Class B for binary images

The RIFF file formats consist' of blocks of data called chunks. They are RIFF Chunk - defines the content of the RIFF file.

The first four bytes of the RIFF chunk data field are allocated for the form type field containing four characters to identify the format of the data stored in the file: AVI, WAV, RMI, PAL and so

The sub chunk contains a four-character ASCII string 10 to identify the type of data.

Four bytes of size contains the count of data values, and the data. The data structure of a chunk is same as all other chunks.

RIFF ChunkThe first 4 characters of the RlFF chunk are reserved for the "RIFF" ASCII string. The next four bytes define the total data size.

(i)    fmt ~ defines the recording characteristics of the waveform.

(ii)   data ~ contains the data for the waveform.

RlFF chunk may contains one or more list chunks.

RGBEQUAD is the color table structure.

PIXELs are the array of bytes for the pixel bit map.

A RIFF DIB file format contains a RIFF chunk with the Form Type "RDIB" and a subchunk called "data" for DIB data.

The "hdr 1" defines the format of the data "Movi" contains the data for the audio-video streams. The third list chunk called "id xl", is an optional index chunk.

Each audio and video stream is grouped together to form a ree chunk. If the size of a rec chunk is not a multiple of2048 bytes, then the rec chunk is padded to make the size of each rec chunk a multiple of 2048 bytes. To align data on a 2048 byte boundary, dummy data is added by a "JUNK" data chunk. The JUNK chunk is a standard RIFF chunk with a 4 character identifier, "JUNK," followed by the dummy data.

The MIDI file format follows music recording metaphor to provide the means of storing separate tracks of music for each instrument so that they can be read and syn~hronized when they are played.

The first four-character string is the identifier string, "MThd" .

The second four bytes contain the data size for the header chunk. It is set to a fixed value of six bytes .

The Track chunk is organized as follows:

Mode messages are used for assigning voice relationships for up to 16 channels; that is, to set the device to MOWO mode or POLY mode. Omny Mode on enables the device to receive voice messages on all channels.

System messages apply to the complete system rather than specific channels and do not contain any channel numbers. There are three types of system messages: common messages, real-time messages, and exclusive messages. In the following, we will see how these messages are used.

Common Messages These messages are common to the complete system. These messages provide for functions such as select a song, setting the song position pointer with number of beats, and sending a tune request to an analog synthesizer.

These messages contain manufacturer-specific data such as identification, serial number, model number, and other information. Here, a standard file format is generated which can be moved across platforms and applications.

JPEG Motion image will be embedded in A VI RIFF file format. There are two standards available:

(i)  MPEG ~ In this, patent and copyright issues are there. 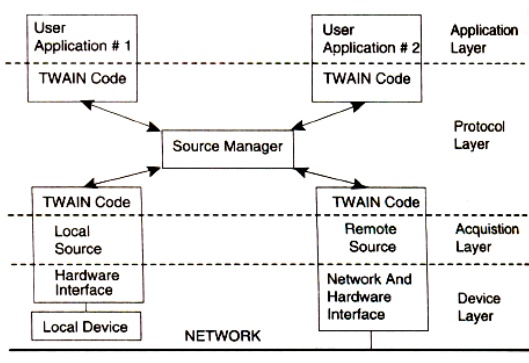 o   The Twain architecture defines a set of application programming interfaces (APls) and a protocol to acquire data from input devices.

o   It is a layered architecture.

o   It has application layer, the protocol layer, the acquisition layer and device layer.

o   Application Layer: This layer sets up a logical connection with a device. The application layer interfaces with protocol layer.

o   Protocol Layer: This layer is responsible for communications between the application and acquisition layers.

o   The main part of the protocol layer is the source Manager.

o   Source manager manages all sessions between an application and the sources, and monitors data acquisition transactions. The protocol layer is a complex layer.

It provides the important aspects of device and application interfacing functions. The Acquisition Layer: It contains the virtual device driver.

It interacts directly with the device driver. This layer is also known as source. It performs the following functions:

1.Control of the device.

2.Acquisition of data from the device.

3.Transfer of data in agreed format.

4.Provision of user interface to control the device.

It may contain optional subchunks:

Fact Chunk: It stores file-dependent information about the contents of the WAVE file. Cue Points Chunk: It identifies a series of positions in the waveform data stream. Playlist Chunk: It specifies a play order for series of cue points. Associated Data Chunk: It provides the ability to attach information, such as labels, to sections of the waveform data stream. Inst Chunk: The file format stores sampled sound synthesizer's samples.