Sound is made up of continuous analog sine waves that tend to repeat depending on the music or voice. The analog waveforms are converted into digital fornlat by analog-to-digital converter (ADC) using sampling process.

Sound is made up of continuous analog sine waves that tend to repeat depending on the music or voice. The analog waveforms are converted into digital fornlat by analog-to-digital converter (ADC) using sampling process. 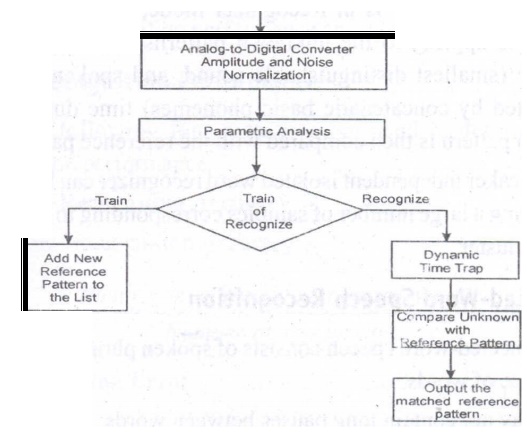 Speech is analog in nature and is cOl1veli to digital form by an analog-to-digital converter (ADC). An ADC takes an input signal from a microphone and converts the amplitude of the sampled analog signal to an 8, 16 or 32 bit digital value.

The four important factors governing the

Sampling Rate: The rate at which the ADC takes a sample of an analog signal. Resolution: The number of bits utilized for conversion determines the resolution of ADC.

Linearity: Linearity implies that the sampling is linear at all frequencies and that the amplitude tmly represents the signal.

Conversion Speed: It is a speed of ADC to convert the analog signal into Digital signals. It must be fast enough.

It provides recognition of a single word at a time. The user must separate every word by a pause. The pause marks the end of one word and the beginning of the next word.

The recognizer's first task is to carry out amplitude and noise normalization to minimize the variation in speech due to ambient noise, the speaker's voice, the speaker's distance from and position relative to the microphone, and the speaker's breath noise.

Training modeIn training mode of the recognizer, the new frames are added to the reference list. Recognizer modeIf the recognizer is in Recognizer mode, then dynamic time warping is applied to the unknown patterns to average out the phoneme (smallest distinguishable sound, and spoken words are constructed by concatenatic basic phonemes) time duration. The unknown pattern is then compared with the reference patterns.

A speaker independent isolated word recognizer can be achieved by groupi.ng a large number of samples corresponding to a word into a single cluster.

2Connected-Word Speech RecognitionConnected-word speech consists of spoken phrase consisting of a sequence of words. It may not contain long pauses between words.

It Recognizes words in a connected-word phrase. In this technique, Recognition is carried out by compensating for rate of speech variations by the process called dynamic time warping (this process is used to expand or compress the time duration of the word), and sliding the adjusted connected-word phrase representation in time past a stored word template for a likely match.

This sytem can be divided into three sections:

(i)               A section consisting of digitization, amplitude normalization, time nonnalization and parametric representation.

(ii)             Second section consisting of segmentation and labeling of the speech segment into a symbolic string based on a knowledgebased or rule-based systems.

(iii)          The final section is to match speech segments to recognize word sequences.

•         Application such as order entry and tracking

It is a server function; It is centralized; Remote users can dial into the system to enter an order or to track the order by making a Voice query.

When a user speaks the name of the person, the rolodex application searches the name and address and voice-synthesizes the name, address, telephone numbers and fax numbers of a selected person. In medical emergency, ambulance technicians can dial in and register patients by speaking into the hospital's centralized system.

Police can make a voice query through central data base to take follow-up action ifhe catch any suspect.

Foreign language learning is another good application where"' an individual student can input words and sentences in the system. The system can then correct for pronunciation or grammar.

MIDI interface is developed by Daver Smith of sequential circuits, inc in 1982. It is an universal synthesizer interface

MIDI is a system specification consisting of both hardware and software ~omponents which define inter-coimectivity and a communication protocol for electronic sysnthesizers, sequences, rythm machines, personal computers, and other electronic musical instruments. The inter-connectivity defines the standard cabling scheme, connector type and input/output circuitry which enable these different MIDI instruments to be interconnected. The communication protocol defines standard multibyte messages that allow controlling the instrument"s voice and messages including to send response, to send status and to send exclusive. 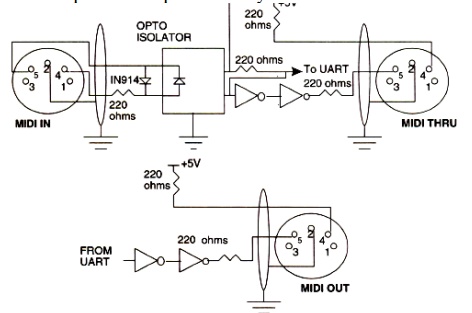 The MIDI communication protocol uses multibyte messages; There are two types of messages:

The channel message have three bytes. The first byte is called a status byte, and the other two bytes are called data bytes.

The two types of channel messages: (i) Voice messages

A sound card consist of the following components:

The audio mixer c:omponent of the sound card typically has external inputs for stereo CD audio, stereo LINE IN, and stereo microphone MICIN.

These are analog inputs, and they go through analog-to-digitaf conversion in conjunction with PCM or ADPCM to generate digitized samples. 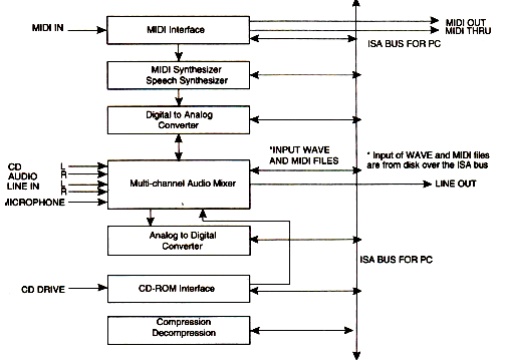 Analog-to-Digital Converters: The ADC gets its input from the audio mixer and converts the amplitude of a sampled analog signal to either an 8-bit or 16-bit digital value.

A video frame grabber is used to capture, manipulate and enhance video images.

SVGA Interface: This is an optional interface for the frame grabber. The frame grabber can be designed to include an SVGA frame buffer with its own output lookup table and digital-to-analog converter.

Video image processing is defined as the process of manipulating a bit map image so that the image can be enhanced, restored, distorted, or analyzed.

Let us discuss about some of the terms using in video and still image processing.

Histogram Sliding: It is used to change the overall visible effect of brightening or darkening of the image. Histogram sliding is implemented by modifying the input look-up table values and using the input lookup table in conjunction with arithmetic logic unit.

Histogram Stretching and Shrinking: It is to increase or decrease the contrast.

Image Subtraction: Image subtraction is used to determine the change from one frame to the next .for image comparisons for key frame detection or motion detection.

Low Pass Filter: A low pass filter causes blurring of the image and appears to cause a reduction in noise.

Image scaling: Image scaling allows enlarging or shrinking the whole or part of an image.

x, yare the spatial co-ordinates of the original pixel.

The translation formula is:

Tx and Ty are the horizontal and vertical coordinates. x, yare the spatial coordinates of the original pixel.

Image transformation: An image contains varying degrees of brightness or colors defined by the spatial frequency. The image can be transformed from spatial domain to the frequency domain by using frequency transform.

Animation: Animation is an illusion of movement created by sequentially playing still image frames at the rate of 15-20 frames per second.

Toggling between image frames: We can create simple animation by changing images at display time. The simplest way is to toggle between two different images. This approach is good to indicate a "Yes" or "No" type situation.

Rotating through several image frames: The animation contains several frames displayed in a loop. Since the animation consists of individual frames, the playback can be paused and resumed at any time.