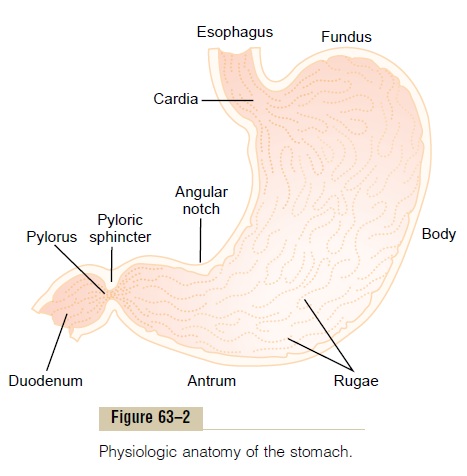 Intense Antral Peristaltic Contractions During Stomach Empty-ing—“Pyloric Pump.” Most of the time, the rhythmicalstomach contractions are weak and function mainly to cause mixing of food and gastric secretions. However, for about 20 per cent of the time while food is in the stomach, the contractions become intense, beginning in midstomach and spreading through the caudad stomach no longer as weak mixing contractions but as strong peristaltic, very tight ringlike constrictions that can cause stomach emptying. As the stomach becomes progressively more and more empty, these constric-tions begin farther and farther up the body of the stomach, gradually pinching off the food in the body of the stomach and adding this food to the chyme in the antrum. These intense peristaltic contractions often create 50 to 70 centimeters of water pressure, which is about six times as powerful as the usual mixing type of peristaltic waves.

When pyloric tone is normal, each strong peristaltic wave forces up to several milliliters of chyme into the duodenum. Thus, the peristaltic waves, in addition to causing mixing in the stomach, also provide a pumping action called the “pyloric pump.”

Role of the Pylorus in Controlling Stomach Emptying. Thedistal opening of the stomach is the pylorus. Here the thickness of the circular wall muscle becomes 50 to 100 per cent greater than in the earlier portions of the stomach antrum, and it remains slightly tonically con-tracted almost all the time. Therefore, the pyloric cir-cular muscle is called the pyloric sphincter.

Despite normal tonic contraction of the pyloric sphincter, the pylorus usually is open enough for water and other fluids to empty from the stomach into the duodenum with ease. Conversely, the constriction usually prevents passage of food particles until they have become mixed in the chyme to almost fluid con-sistency. The degree of constriction of the pylorus is increased or decreased under the influence of nervous and humoral reflex signals from both the stomach and the duodenum, as discussed shortly.

Gastric Factors That Promote Emptying Effect of Gastric Food Volume on Rate of Emptying. Increasedfood volume in the stomach promotes increased emp-tying from the stomach. But this increased emptying does not occur for the reasons that one would expect. It is not increased storage pressure of the food in the stomach that causes the increased emptying because, in the usual normal range of volume, the increase in volume does not increase the pressure much. However, stretching of the stomach wall does elicit local myenteric reflexes in the wall that greatly accen-tuate activity of the pyloric pump and at the same time inhibit the pylorus.

Effect of the Hormone Gastrin on Stomach Emptying. We shall see that stomach wall stretch and the presence of certain types of foods in the stomach— particularly digestive products of meat—elicit release of a hormone called gastrin from the antral mucosa. This has potent effects to cause secretion of highly acidic gastric juice by the stomach glands. Gastrin also has mild to moderate stimulatory effects on motor functions in the body of the stomach. Most important, it seems to enhance the activity of the pyloric pump. Thus, it, too, probably promotes stomach emptying.

Powerful Duodenal Factors That Inhibit Stomach Emptying Inhibitory Effect of Enterogastric Nervous Reflexes from the Duodenum. When food enters the duodenum, multiplenervous reflexes are initiated from the duodenal wall that pass back to the stomach to slow or even stop stomach emptying if the volume of chyme in the duo-denum becomes too much. These reflexes are medi-ated by three routes: (1) directly from the duodenum to the stomach through the enteric nervous system in the gut wall, (2) through extrinsic nerves that go to the prevertebral sympathetic ganglia and then back through inhibitory sympathetic nerve fibers to the stomach, and (3) probably to a slight extent through the vagus nerves all the way to the brain stem, where they inhibit the normal excitatory signals transmitted to the stomach through the vagi. All these parallel reflexes have two effects on stomach emptying: first, they strongly inhibit the “pyloric pump” propulsive contractions, and second, they increase the tone of the pyloric sphincter.

The types of factors that are continually monitored in the duodenum and that can initiate enterogastric inhibitory reflexes include the following:

1. The degree of distention of the duodenum

2. The presence of any degree of irritation of the duodenal mucosa

3. The degree of acidity of the duodenal chyme

4. The degree of osmolality of the chyme

The enterogastric inhibitory reflexes are especially sensitive to the presence of irritants and acids in the duodenal chyme, and they often become strongly acti-vated within as little as 30 seconds. For instance, when-ever the pH of the chyme in the duodenum falls below about 3.5 to 4, the reflexes frequently block further release of acidic stomach contents into the duodenum until the duodenal chyme can be neutralized by pan-creatic and other secretions.

Finally, either hypotonic or hypertonic fluids (espe-cially hypertonic) elicit the inhibitory reflexes. Thus, too rapid flow of nonisotonic fluids into the small intestine is prevented, thereby also preventing rapid changes in electrolyte concentrations in the whole-body extracellular fluid during absorption of the intes-tinal contents.

Hormonal Feedback from the Duodenum Inhibits Gastric Emp-tying—Role of Fats and the Hormone Cholecystokinin. Notonly do nervous reflexes from the duodenum to the stomach inhibit stomach emptying, but hormones released from the upper intestine do so as well. The stimulus for releasing these inhibitory hormones is mainly fats entering the duodenum, although other types of foods can increase the hormones to a lesser degree.

On entering the duodenum, the fats extract several different hormones from the duodenal and jejunal epithelium, either by binding with “receptors” on the epithelial cells or in some other way. In turn, the hormones are carried by way of the blood to the stomach, where they inhibit the pyloric pump and at the same time increase the strength of contraction of the pyloric sphincter. These effects are important because fats are much slower to be digested than most other foods.

Precisely which hormones cause the hormonal feedback inhibition of the stomach is not fully clear. The most potent appears to be cholecystokinin (CCK), which is released from the mucosa of the jejunum in response to fatty substances in the chyme. This hormone acts as an inhibitor to block increased stomach motility caused by gastrin.

Other possible inhibitors of stomach emptying are the hormones secretin and gastric inhibitory peptide(GIP). Secretin is released mainly from the duodenalmucosa in response to gastric acid passed from the stomach through the pylorus. GIP has a general but weak effect of decreasing gastrointestinal motility.

GIP is released from the upper small intestine in response mainly to fat in the chyme, but to a lesser extent to carbohydrates as well. Although GIP does inhibit gastric motility under some conditions, its effect at physiologic concentrations is probably mainly to stimulate secretion of insulin by the pancreas.

These hormones are discussed at greater length elsewhere in this text, in rela-tion to control of gallbladder emptying and control of rate of pancreatic secretion.

In summary, hormones, especially CCK, can inhibit gastric emptying when excess quantities of chyme, especially acidic or fatty chyme, enter the duodenum from the stomach.

Summary of the Control of Stomach Emptying

Emptying of the stomach is controlled only to a mod-erate degree by stomach factors such as the degree of filling in the stomach and the excitatory effect of gastrin on stomach peristalsis. Probably the more important control of stomach emptying resides in inhibitory feedback signals from the duodenum, including both enterogastric inhibitory nervous feed-back reflexes and hormonal feedback by CCK. These feedback inhibitory mechanisms work together to slow the rate of emptying when (1) too much chyme is already in the small intestine or (2) the chyme is excessively acidic, contains too much unprocessed protein or fat, is hypotonic or hypertonic, or is irritat-ing. In this way, the rate of stomach emptying is limited to that amount of chyme that the small intestine can process.