Movements of the Small Intestine

The movements of the small intestine, like those else-where in the gastrointestinal tract, can be divided into mixing contractions and propulsive contractions.

Movements of the Small Intestine

The movements of the small intestine, like those else-where in the gastrointestinal tract, can be divided into mixing contractions and propulsive contractions. To agreat extent, this separation is artificial because essen-tially all movements of the small intestine cause at least some degree of both mixing and propulsion. The usual classification of these processes is the following.

When a portion of the small intestine becomes dis-tended with chyme, stretching of the intestinal wall elicits localized concentric contractions spaced at intervals along the intestine and lasting a fraction of a minute. 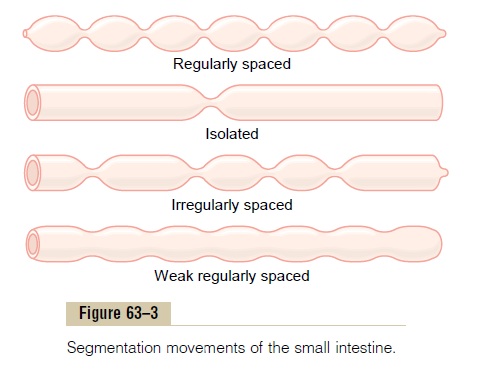 Peristalsis in the Small Intestine. Chyme is propelledthrough the small intestine by peristaltic waves. These can occur in any part of the small intestine, and they move toward the anus at a velocity of 0.5 to 2.0 cm/sec, faster in the proximal intestine and slower in the ter-minal intestine. They normally are very weak and usually die out after traveling only 3 to 5 centimeters, very rarely farther than 10 centimeters, so that forward movement of the chyme is very slow, so slow in fact that net movement along the small intestine normally  averages only 1 cm/min. This means that 3 to 5 hours are required for passage of chyme from the pylorus to the ileocecal valve.

Control of Peristalsis by Nervous and Hormonal Signals. Peri-staltic activity of the small intestine is greatly increased after a meal. This is caused partly by the beginning entry of chyme into the duodenum causing stretch of the duodenal wall, but also by a so-called gastroentericreflex that is initiated by distention of the stomach andconducted principally through the myenteric plexus from the stomach down along the wall of the small intestine.

In addition to the nervous signals that may affect small intestinal peristalsis, several hormonal factors also affect peristalsis. They include gastrin, CCK, insulin, motilin, and serotonin, all of which enhanceintestinal motility and are secreted during various phases of food processing. Conversely, secretin and glucagon inhibit small intestinal motility. The physio-logic importance of each of these hormonal factors for controlling motility is still questionable.

The function of the peristaltic waves in the small intestine is not only to cause progression of chyme toward the ileocecal valve but also to spread out the chyme along the intestinal mucosa. As the chyme enters the intestines from the stomach and elicits peri-stalsis, this immediately spreads the chyme along the intestine; and this process intensifies as additional chyme enters the duodenum. On reaching the ileoce-cal valve, the chyme is sometimes blocked for several hours until the person eats another meal; at that time, a gastroileal reflex intensifies peristalsis in the ileum and forces the remaining chyme through the ileocecal valve into the cecum of the large intestine.

Peristaltic Rush. Although peristalsis in the smallintestine is normally weak, intense irritation of the intestinal mucosa, as occurs in some severe cases of infectious diarrhea, can cause both powerful and rapid peristalsis, called the peristaltic rush. This is initiated partly by nervous reflexes that involve the autonomic nervous system and brain stem and partly by intrinsic enhancement of the myenteric plexus reflexes within the gut wall itself.The powerful peristaltic contractions travel long distances in the small intestine within minutes, sweeping the contents of the intestine into the colon and thereby relieving the small intestine of irri-tative chyme and excessive distention.

Movements Caused by the Muscularis Mucosae and Muscle Fibers of the Villi. Themuscularis mucosaecan cause shortfolds to appear in the intestinal mucosa. In addition, individual fibers from this muscle extend into the intes-tinal villi and cause them to contract intermittently. The mucosal folds increase the surface area exposed to the chyme, thereby increasing absorption. Also, contrac-tions of the villi—shortening, elongating, and shorten-ing again—“milk” the villi, so that lymph flows freely from the central lacteals of the villi into the lymphatic system. These mucosal and villous contractions are ini-tiated mainly by local nervous reflexes in the submu-cosal nerve plexus that occur in response to chyme in the small intestine.

Function of the Ileocecal Valve

A principal function of the ileocecal valve is to prevent backflow of fecal contents from the colon into the small intestine. As shown in Figure 63–4, the ileocecal valve itself protrudes into the lumen of the cecum and therefore is forcefully closed when excess pressure builds up in the cecum and tries to push cecal contents backward against the valve lips. The valve usually can resist reverse pressure of at least 50 to 60 centimeters of water. 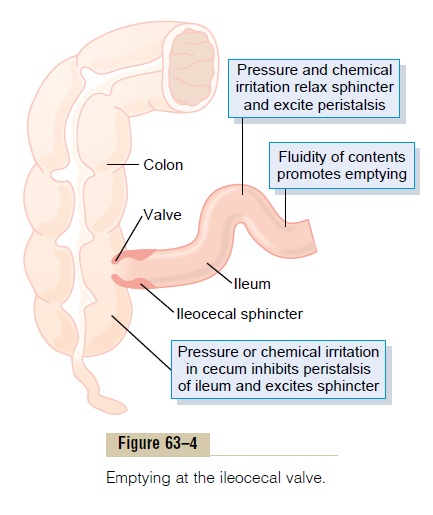 Resistance to emptying at the ileocecal valve pro-longs the stay of chyme in the ileum and thereby facilitates absorption. Normally, only 1500 to 2000 mil-liliters of chyme empty into the cecum each day.