The amount of food that a person ingests is determined principally by intrinsic desire for food called hunger.

The amount of food that a person ingests is determined principally by intrinsic desire for food called hunger. The type of food that a person preferentially seeks is determined byappetite. These mechanisms in themselves are extremely important automatic regulatory systems for maintaining an adequate nutri-tional supply for the body;. The current discussion of food ingestion is confined to the mechanics of ingestion, especially mastication and swallowing.

The teeth are admirably designed for chewing, the anterior teeth (incisors) pro-viding a strong cutting action and the posterior teeth (molars), a grinding action. All the jaw muscles working together can close the teeth with a force as great as 55 pounds on the incisors and 200 pounds on the molars.

Most of the muscles of chewing are innervated by the motor branch of the fifth cranial nerve, and the chewing process is controlled by nuclei in the brain stem. Stimulation of specific reticular areas in the brain stem taste centers will cause rhythmical chewing movements. Also, stimulation of areas in the hypo-thalamus, amygdala, and even the cerebral cortex near the sensory areas for taste and smell can often cause chewing.

Much of the chewing process is caused by a chewing reflex, which may be explained as follows: The presence of a bolus of food in the mouth at first ini-tiates reflex inhibition of the muscles of mastication, which allows the lower jaw to drop. The drop in turn initiates a stretch reflex of the jaw muscles that leads to rebound contraction. This automatically raises the jaw to cause closure of the teeth, but it also compresses the bolus again against the linings of the mouth, which inhibits the jaw muscles once again, allowing the jaw to drop and rebound another time; this is repeated again and again.

Chewing is important for digestion of all foods, but especially important for most fruits and raw vegetables because these have indigestible cellulose mem-branes around their nutrient portions that must be broken before the food can be digested. Also, chewing aids the digestion of food for still another simple reason: Digestive enzymes act only on the surfaces of food particles; therefore, the rate of digestion is absolutely dependent on the total surface area exposed to the digestive secretions. In addition, grinding the food to a very fine particulate consistency prevents excoriation of the gastrointesti-nal tract and increases the ease with which food is emptied from the stomach into the small intestine, then into all succeeding segments of the gut.

Swallowing is a complicated mechanism, principally because the pharynx subserves respiration as well as swallowing. The pharynx is converted for only a few seconds at a time into a tract for propulsion of food. It is especially important that respiration not be com-promised because of swallowing.

Voluntary Stage of Swallowing. When the food is ready forswallowing, it is “voluntarily” squeezed or rolled pos-teriorly into the pharynx by pressure of the tongue upward and backward against the palate, as shown in Figure 63–1. From here on, swallowing becomes entirely—or almost entirely—automatic and ordinar-ily cannot be stopped. 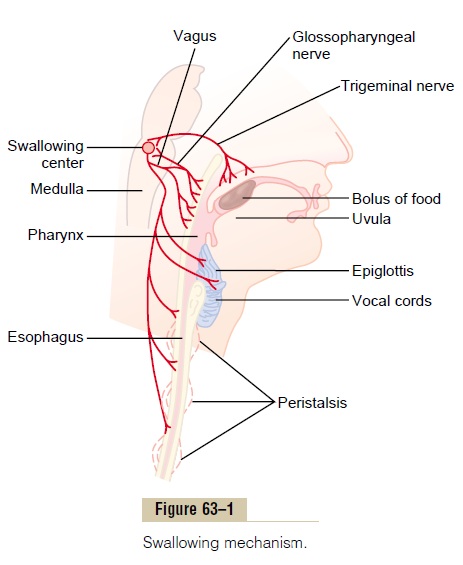 Pharyngeal Stage of Swallowing. As the bolus of foodenters the posterior mouth and pharynx, it stimulates epithelial swallowing receptor areas all around theopening of the pharynx, especially on the tonsillar pillars, and impulses from these pass to the brain stem to initiate a series of automatic pharyngeal muscle contractions as follows:

1. The soft palate is pulled upward to close the posterior nares, to prevent reflux of food into the nasal cavities.

2. The palatopharyngeal folds on each side of the pharynx are pulled medially to approximate each other. In this way, these folds form a sagittal slit through which the food must pass into the posterior pharynx. This slit performs a selective action, allowing food that has been masticated sufficiently to pass with ease. Because this stage of swallowing lasts less than 1 second, any large object is usually impeded too much to pass into the esophagus.

4. The upward movement of the larynx also pulls up and enlarges the opening to the esophagus. At the same time, the upper 3 to 4 centimeters of the esophageal muscular wall, called the upper esophageal sphincter (also called the pharyngoesophageal sphincter) relaxes, thus allowing food to move easily and freely from the posterior pharynx into the upper esophagus. Between swallows, this sphincter remains strongly contracted, thereby preventing air from going into the esophagus during respiration. The upward movement of the larynx also lifts the glottis out of the main stream of food flow, so that the food mainly passes on each side of the epiglottis rather than over its surface; this adds still another protection against entry of food into the trachea.

5. Once the larynx is raised and the pharyngoesophageal sphincter becomes relaxed, the entire muscular wall of the pharynx contracts, beginning in the superior part of the pharynx, then spreading downward over the middle and inferior pharyngeal areas, which propels the food by peristalsis into the esophagus.

To summarize the mechanics of the pharyngeal stage of swallowing: The trachea is closed, the esoph-agus is opened, and a fast peristaltic wave initiated by the nervous system of the pharynx forces the bolus of food into the upper esophagus, the entire process occurring in less than 2 seconds.

Nervous Initiation of the Pharyngeal Stage of Swallow- ing. The most sensitive tactile areas of the posteriormouth and pharynx for initiating the pharyngeal stage of swallowing lie in a ring around the pharyngeal opening, with greatest sensitivity on the tonsillar pillars. Impulses are transmitted from these areas through the sensory portions of the trigeminal and glossopharyngeal nerves into the medulla oblongata, either into or closely associated with the tractus soli-tarius, which receives essentially all sensory impulsesfrom the mouth.

The successive stages of the swallowing process are then automatically initiated in orderly sequence by neuronal areas of the reticular substance of the medulla and lower portion of the pons. The sequence of the swallowing reflex is the same from one swallow to the next, and the timing of the entire cycle also remains constant from one swallow to the next. The areas in the medulla and lower pons that control swallowing are collectively called the deglutition or swallowing center.

The motor impulses from the swallowing center to the pharynx and upper esophagus that cause swallow-ing are transmitted successively by the 5th, 9th, 10th, and 12th cranial nerves and even a few of the superior cervical nerves.

In summary, the pharyngeal stage of swallowing is principally a reflex act. It is almost always initiated by voluntary movement of food into the back of the mouth, which in turn excites involuntary pharyngeal sensory receptors to elicit the swallowing reflex.

Effect of the Pharyngeal Stage of Swallowing on Res- piration. The entire pharyngeal stage of swallowingusually occurs in less than 6 seconds, thereby inter-rupting respiration for only a fraction of a usual res-piratory cycle. The swallowing center specifically inhibits the respiratory center of the medulla during this time, halting respiration at any point in its cycle to allow swallowing to proceed. Yet, even while a person is talking, swallowing interrupts respiration for such a short time that it is hardly noticeable.

Esophageal Stage of Swallowing. The esophagus functionsprimarily to conduct food rapidly from the pharynx to the stomach, and its movements are organized specif-ically for this function.

Food swallowed by a person who is in the upright posi-tion is usually transmitted to the lower end of the esophagus even more rapidly than the peristaltic wave itself, in about 5 to 8 seconds, because of the additional effect of gravity pulling the food downward.

Receptive Relaxation of the Stomach. When theesophageal peristaltic wave approaches toward the stomach, a wave of relaxation, transmitted through myenteric inhibitory neurons, precedes the peristalsis. Furthermore, the entire stomach and, to a lesser extent, even the duodenum become relaxed as this wave reaches the lower end of the esophagus and thus are prepared ahead of time to receive the food propelled into the esophagus during the swallowing act.

Function of the Lower Esophageal Sphincter (Gastro- esophageal Sphincter). At the lower end of the esoph-agus, extending upward about 3 centimeters above its juncture with the stomach, the esophageal circular muscle functions as a broad lower esophageal sphinc-ter, also called the gastroesophageal sphincter. Thissphincter normally remains tonically constricted with an intraluminal pressure at this point in the esophagus of about 30 mm Hg, in contrast to the midportion of the esophagus, which normally remains relaxed. When a peristaltic swallowing wave passes down the esoph-agus, there is “receptive relaxation” of the lower esophageal sphincter ahead of the peristaltic wave, which allows easy propulsion of the swallowed food into the stomach. Rarely, the sphincter does not relax satisfactorily, resulting in a condition called achalasia.

The stomach secretions are highly acidic and contain many proteolytic enzymes. The esophageal mucosa, except in the lower one eighth of the esoph-agus, is not capable of resisting for long the digestive action of gastric secretions. Fortunately, the tonic con-striction of the lower esophageal sphincter helps to prevent significant reflux of stomach contents into the esophagus except under very abnormal conditions.

Additional Prevention of Esophageal Reflux by Valve-like Closure of the Distal End of the Esophagus.