Movements of the Colon

The principal functions of the colon are (1) absorption of water and electrolytes from the chyme to form solid feces and (2) storage of fecal matter until it can be expelled.

Movements of the Colon

The principal functions of the colon are (1) absorption of water and electrolytes from the chyme to form solid feces and (2) storage of fecal matter until it can be expelled. The proximal half of the colon, shown in Figure 63–5, is concerned principally with absorption, and the distal half with storage. Because intense colon wall movements are not required for these functions, the movements of the colon are normally very slug-gish. Yet in a sluggish manner, the movements still have characteristics similar to those of the small intes-tine and can be divided once again into mixing move-ments and propulsive movements. 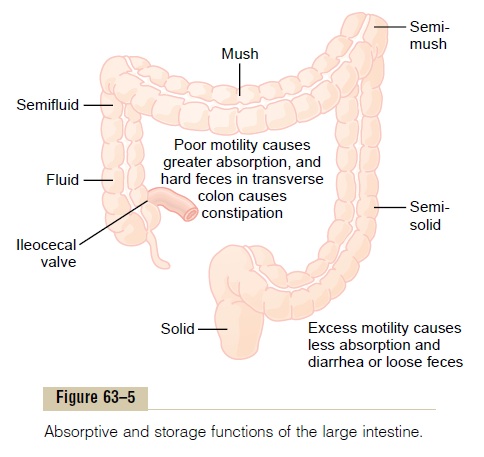 At each of these constrictions, about 2.5 cen-timeters of the circular muscle contracts, sometimes constricting the lumen of the colon almost to occlu-sion. At the same time, the longitudinal muscle of the colon, which is aggregated into three longitudinal strips called the teniae coli, contracts. These combined contractions of the circular and longitudinal strips of muscle cause the unstimulated portion of the large intestine to bulge outward into baglike sacs called haustrations.

Each haustration usually reaches peak intensity in about 30 seconds and then disappears during the next 60 seconds. They also at times move slowly toward the anus during contraction, especially in the cecum and ascending colon, and thereby provide a minor amount of forward propulsion of the colonic contents. After another few minutes, new haustral contractions occur in other areas nearby. Therefore, the fecal material in the large intestine is slowly dug into and rolled over in much the same manner that one spades the earth. In this way, all the fecal material is gradually exposed to the mucosal surface of the large intestine, and fluid and dissolved substances are progressively absorbed until only 80 to 200 milliliters of feces are expelled each day.

Propulsive Movements—“Mass Movements.” Much of thepropulsion in the cecum and ascending colon results from the slow but persistent haustral contractions, requiring as many as 8 to 15 hours to move the chyme from the ileocecal valve through the colon, while the chyme itself becomes fecal in quality, a semisolid slush instead of semifluid.

From the cecum to the sigmoid, mass movements can, for many minutes at a time, take over the propul-sive role. These movements usually occur only one to three times each day, in many people especially for about 15 minutes during the first hour after eating breakfast.

A mass movement is a modified type of peristalsis characterized by the following sequence of events: First, a constrictive ring occurs in response to a dis-tended or irritated point in the colon, usually in the transverse colon. Then, rapidly, the 20 or more cen-timeters of colon distal to the constrictive ring lose their haustrations and instead contract as a unit, propelling the fecal material in this segment en masse further down the colon. The contraction develops progres-sively more force for about 30 seconds, and relaxation occurs during the next 2 to 3 minutes. Then, another mass movement occurs, this time perhaps farther along the colon.

A series of mass movements usually persists for 10 to 30 minutes. Then they cease but return perhaps a half day later. When they have forced a mass of feces into the rectum, the desire for defecation is felt.

Initiation of Mass Movements by Gastrocolic and Duo- enocolic Reflexes. Appearance of mass movementsafter meals is facilitated by gastrocolic and duodeno-colic reflexes. These reflexes result from distention ofthe stomach and duodenum. They occur either not at all or hardly at all when the extrinsic autonomic nerves to the colon have been removed; therefore, the reflexes almost certainly are transmitted by way of the auto-nomic nervous system.

Irritation in the colon can also initiate intense mass movements. For instance, a person who has an ulcer-ated condition of the colon mucosa (ulcerative colitis) frequently has mass movements that persist almost all the time.

Most of the time, the rectum is empty of feces. This results partly from the fact that a weak functional sphincter exists about 20 centimeters from the anus at the juncture between the sigmoid colon and the rectum. There is also a sharp angulation here that con-tributes additional resistance to filling of the rectum. 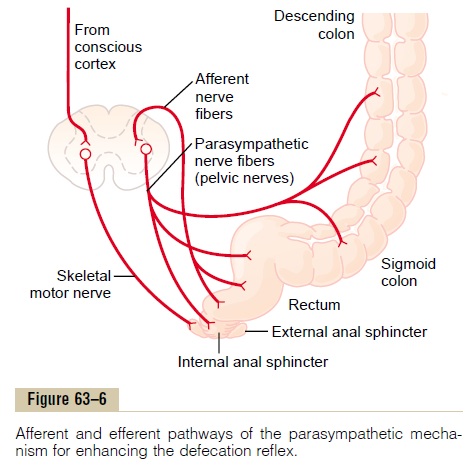 sphincter, thus converting the intrinsic myenteric defe- cation reflex from a weak effort into a powerful process of defecation that is sometimes effective in emptying the large bowel all the way from the splenic flexure of the colon to the anus.

When it becomes convenient for the person to defe- cate, the defecation reflexes can purposely be activated by taking a deep breath to move the diaphragm down- ward and then contracting the abdominal muscles to increase the pressure in the abdomen, thus forcing fecal contents into the rectum to cause new reflexes. Reflexes initiated in this way are almost never as effect tive as those that arise naturally, for which reason people who too often inhibit their natural reflexes are likely to become severely constipated.