Regardless of the type of neuron under consideration, the fundamental steps in chemical transmission are the same.

Regardless of the type of neuron under consideration, the fundamental steps in chemical transmission are the same. Each of these steps is a potential site for phar-macological intervention in the normal transmission process:

1. Synthesis of the transmitter

2. Storage of the transmitter

3. Release of the transmitter by a nerve action potential

5. Rapid removal of the transmitter from the vicinity of the receptors

6. Recovery of the effector cell to the state that preceded transmitter action

The processes involved in neurochemical transmission in a cholinergic neuron are shown in Figure 9.2. The ini-tial substrates for the synthesis of acetylcholine are glu-cose and choline. Glucose enters the neuron by means of facilitated transport. There is some disagreement as to whether choline enters cells by active or facilitated transport. Pyruvate derived from glucose is transported into mitochondria and converted to acetylcoenzyme A (acetyl-CoA). The acetyl-CoA is transported back into the cytosol. With the aid of the enzyme choline acetyl-transferase, acetylcholine is synthesized from acetyl-CoA and choline. The acetylcholine is then transported into and stored within the storage vesicles by as yet un-known mechanisms. 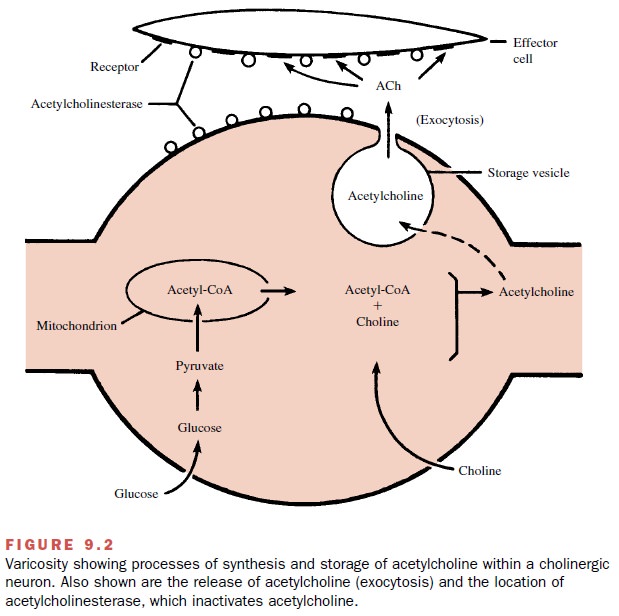 Conduction of an action potential through the ter-minal branches of an axon causes depolarization of the varicosity membrane, resulting in the release of trans-mitter molecules via exocytosis. Once in the junctional extracellular space (biophase), acetylcholine interacts with cholinoreceptors.

A key factor in the process of exocytosis is the entry of extracellular calcium ions during the depolarization.

The interactions between transmitters and their receptors are readily reversible, and the number of transmitter–receptor complexes formed is a direct func-tion of the amount of transmitter in the biophase. The length of time that intact molecules of acetylcholine re-main in the biophase is short because acetylcholinesterase, an enzyme that rapidly hydrolyzes acetylcholine, is highly concentrated on the outer surfaces of both the prejunc-tional (neuronal) and postjunctional (effector cell) mem-branes. A rapid hydrolysis of acetylcholine by the enzyme results in a lowering of the concentration of free trans-mitter and a rapid dissociation of the transmitter from its receptors; little or no acetylcholine escapes into the circu-lation.Any acetylcholine that does reach the circulation is immediately inactivated by plasma esterases.

The rapid removal of transmitter is essential to the exquisite control of neurotransmission. As a conse-quence of rapid removal, the magnitude and duration of effect produced by acetylcholine are directly related to the frequency of transmitter release, that is, to the fre-quency of action potentials generated in the neuron.

Transmission in noradrenergic neurons is somewhat more complex, particularly in regard to the mechanisms by which the transmitter is removed from the biophase subsequent to its release. Noradrenergic transmission is represented diagrammatically in Figure 9.3. 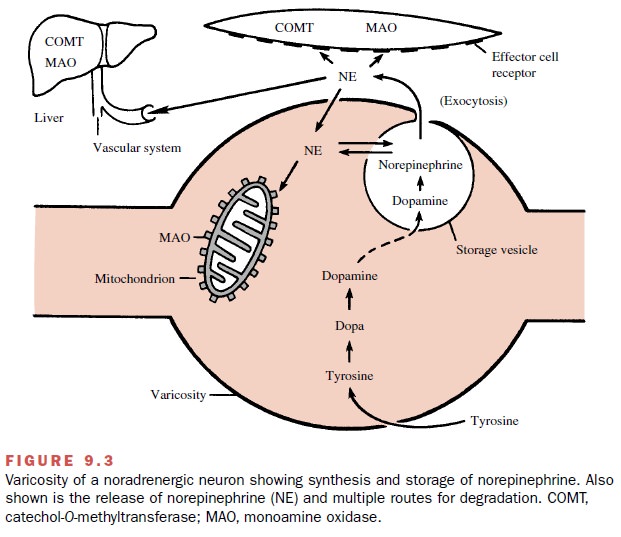 Synthesis of norepinephrine begins with the amino acid tyrosine, which enters the neuron by active trans-port, perhaps facilitated by a permease. In the neuronal cytosol, tyrosine is converted by the enzyme tyrosine hy-droxylase to dihydroxyphenylalanine (dopa), which is converted to dopamine by the enzyme aromatic L–amino acid decarboxylase, sometimes termed dopa-decarboxylase. The dopamine is actively transported into storage vesicles, where it is converted to norepi-nephrine (the transmitter) by dopamine -hydroxylase, an enzyme within the storage vesicle. 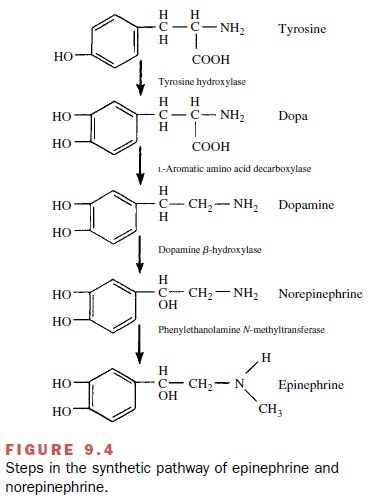 Like the cholinergic transmitter, the noradrenergic transmitter is released by action potentials through ex-ocytosis, the contents of entire vesicles being emptied into the biophase (synaptic or junctional region). Similarly, the formation of transmitter–receptor com-plexes is a direct function of the concentration of trans-mitter in the biophase and is readily reversible. In this instance, the receptors are adrenoceptors.

Three processes contribute to the removal of nor-epinephrine from the biophase:

·    Transport back into the noradrenergic neuron (reup-take), followed by either vesicular storage or by en-zymatic inactivation by mitochondrial MAO. The transport of norepinephrine into the neurons is a sodium-facilitated process similar to that for choline transport.

·    Diffusion from the synapse into the circulation and ultimate enzymatic destruction in the liver and renal excretion.

It is important to make a clear distinction between neuronal and vesicular transport. Neuronal transport occurs from the junctional extracellular fluid (biophase) across the cell membrane of the neuron and into the neuronal cytosol. Vesicular transport is from the neu-ronal cytosol across the membrane of the vesicle and into the vesicle. Although these two systems readily transport both norepinephrine and epinephrine, certain drugs will selectively inhibit one or the other transport system.

The second most important mechanism for remov-ing norepinephrine from the synapse is the escape of neuronally released norepinephrine into the general circulation and its metabolism in the liver. The liver has two enzymes that perform this function: catechol-O-methyltransferase (COMT) and MAO.

COMT is a specific enzyme, accepting only catechols as substrates. A catechol is a substance with two adja- cent hydroxyl groups on an unsaturated six-member ring. The end result of the action of COMT is the O-methylation of the meta-hydroxyl group on the catechol nucleus. Figure 9.5 illustrates the action of COMT on norepinephrine or epinephrine. This reaction reduces the biological activity of norepinephrine or epinephrine at least 100-fold. 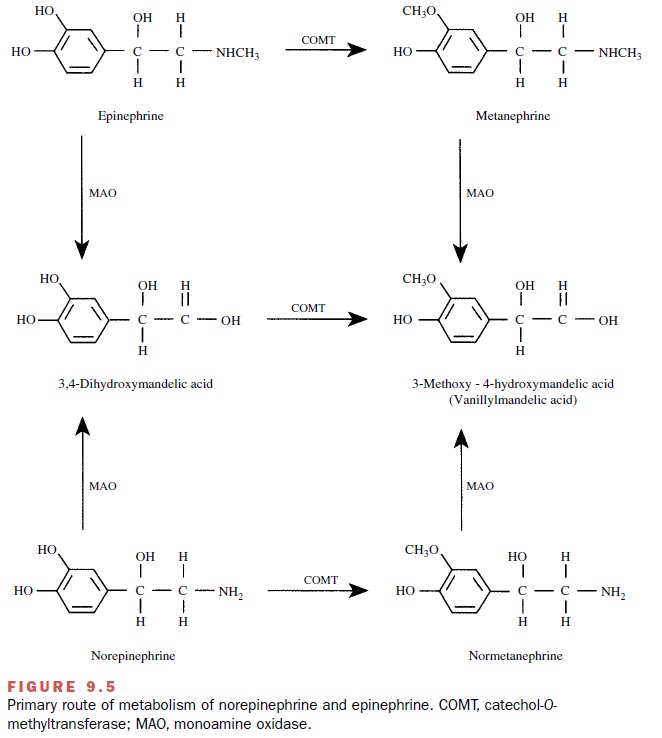 MAO is a much less discriminating enzyme in that it will catalyze the removal of an amine group from a va-riety of substrates. The action of MAO on norepineph-rine and epinephrine also is indicated in Figure 9.5. The list of its substrates is very large, including endogenous substances (norepinephrine, epinephrine, dopamine, tyramine, 5-hydroxy-tryptamine) and many drugs that are amines. At least in the brain, two separate forms of MAO have been described: MAO type A and MAO type B. The two types are differentiated on the basis of substrate and inhibitor specificity.

Although either COMT or MAO may act first on circulating norepinephrine or epinephrine, COMT is the more rapidly acting enzyme, and therefore more molecules are O-methylated and then deaminated than the reverse. Some norepinephrine and epinephrine ap-pear unchanged in the urine. The larger portion, how-ever, is metabolized and the products of metabolism ex-creted in the urine, often as conjugates.

Catecholamines can be transported into effector cells (extraneuronal uptake). These cells generally con-tain both COMT and MAO. The combined processes of extraneuronal uptake and O-methylation are believed to be a minor but functionally significant, site of irre-versible loss of catecholamines. The precise role of ex-traneuronal MAO in transmitter inactivation remains unknown.