Receptors on the Autonomic Effector Cells

RECEPTORS ON THE AUTONOMIC EFFECTOR CELLS

The action of administered acetylcholine on effector systems innervated by parasympathetic postganglionic neurons (smooth muscle cells, cardiac muscle cells, and exocrine gland cells) resembled the actions produced by the naturally occurring plant alkaloid muscarine. The actions of both acetylcholine and muscarine on the vis-ceral effectors are similar to those produced by parasympathetic nerve stimulation. Furthermore, the effects of acetylcholine, muscarine, and parasympa-thetic nerve stimulation on visceral effectors are antag-onized by atropine, another plant alkaloid.

The action of acetylcholine at the skeletal muscle motor end plate resembles that produced by nicotine. Thus, the cholinoreceptor on skeletal muscle is a nico-tinic receptor. Based on antagonist selectivity, however, the autonomic and somatic nicotinic receptors are not pharmacologically identical .

Acetylcholine can stimulate a whole family of re-ceptors. However, these receptors are sufficiently chem-ically diverse that different exogenous agonists and antagonists can distinguish among them. Great thera-peutic benefit has been obtained from this diversity be-cause it allows the development of therapeutic agents that can selectively mimic or antagonize actions of acetylcholine. Such a diversity of receptor subtypes ex-ists for other neurotransmitters in addition to acetyl-choline.

Adrenoceptors interact not only with norepinephrine but also with the adrenal medullary hormone epineph-rine and a number of chemically related drugs. However, the responses produced by the drugs in dif-ferent autonomic structures differ quantitatively or qualitatively from one another.

On the basis of the observed selectivity of action among agonists and antagonists, it was proposed that two types of adrenoceptors exist. These were designated as α- and β-adrenoceptors. Subsequently, it has become necessary to classify the adrenoceptors further into α 1-, α 2-, β 1-, and β 2-receptor subtypes. Table 9.1 indicates present knowledge of the distribution of the subtypes of adrenoceptors in various tissues. 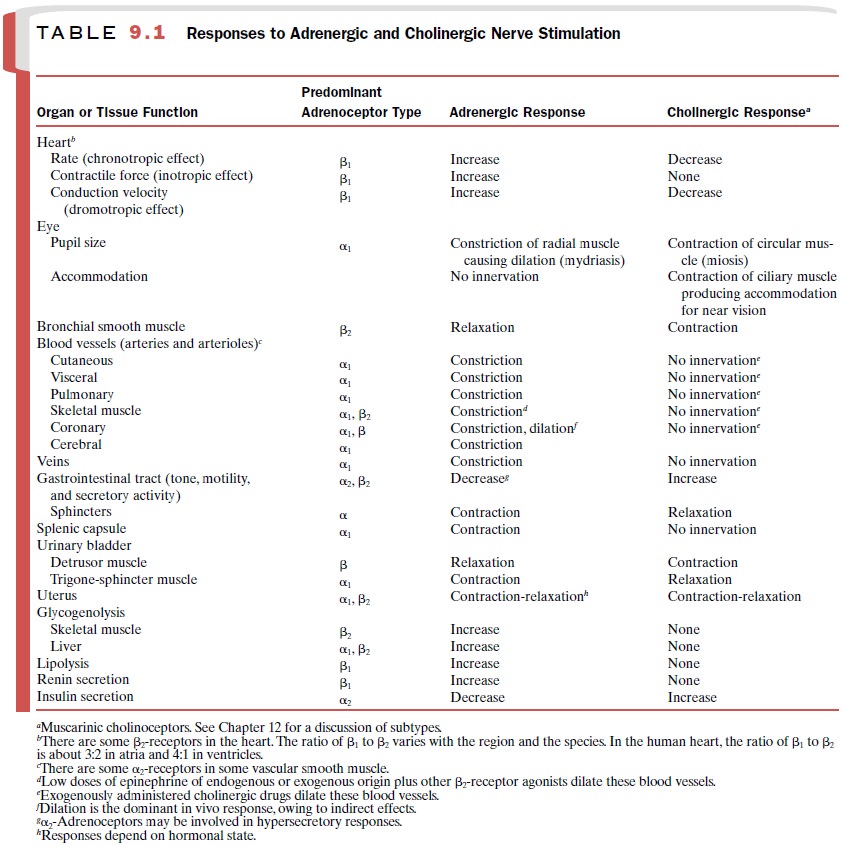 The α 1-adrenoceptors are located at postjunctional (postsynaptic) sites on tissues innervated by adrenergic neurons. α 2-Adrenoceptors having a presynaptic (i.e., neuronal) location are involved in the feedback inhibi-tion of norepinephrine release from nerve terminals (discussed later). α 2-Receptors also can occur postjunc-tionally. The β 1-adrenoceptors are found chiefly in the heart and adipose tissue, while β 2-adrenoceptors are lo-cated in a number of sites, including bronchial smooth muscle and skeletal muscle blood vessels, and are asso-ciated with smooth muscle relaxation.

The existence of a β 3-adrenoceptor has recently been demonstrated in human adipose tissue along with the β 1-adrenoceptor. This observation raises the possi-bility that eventually therapeutic drugs may selectively alter lipid metabolism and therefore provide therapeu-tic management of obesity. The β 3-receptor and the re-cently identified subtypes within the α 1- and α 2-receptor groups ( α1A, α 1B, etc.) also have not been included in thetable, since as yet few therapeutic drugs distinguish among these further subtypes. One exception is tam-sulosin, an antagonist with some selectivity for α 1A-receptors in the urinary tract.

The inhibitory presynaptic α-adrenoceptors found on noradrenergic neurons are of the α 2-subtype. Adrenoceptors of the β2 subclass also occur presynap-tically, and activation of these receptors leads to en-hanced norepinephrine release. The physiological and pharmacological importance of these presynaptic β2-receptors is less certain than it is for presynaptic α2-receptors.

Presynaptic receptors for nonadrenomimetic sub-stances (e.g., acetylcholine, adenosine) also have been found on the sympathetic presynaptic nerve ending. Their importance and role in the modulation of neuro-transmission have not been definitively established.