Two PNS neurotransmitters, acetylcholine and norepi-nephrine, have particular clinical importance. Both are synthesized and stored primarily in the nerve terminals until released by a nerve impulse. It should be noted, to avoid confusion, that in the United States the transmit-ter in the sympathetic nervous system is referred to as norepinephrine and the major adrenal medullary hor-mone is referred to as epinephrine. In Europe and most of the world these two substances are called noradrena-line and adrenaline, respectively. 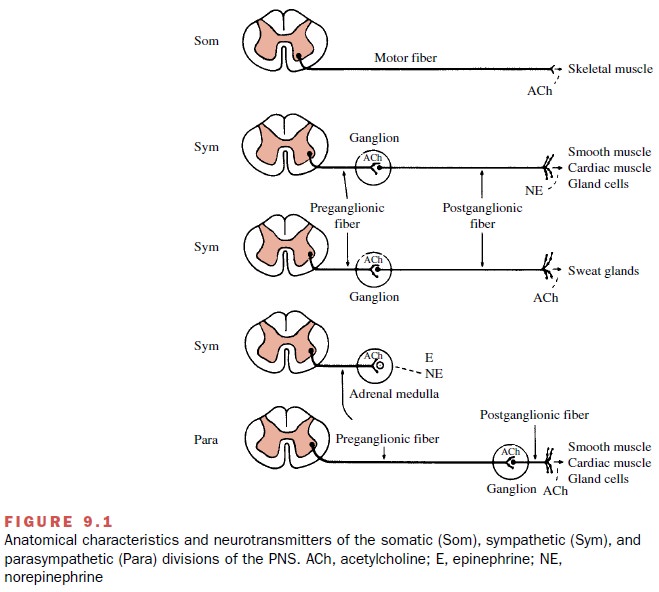 The receptors with which acetylcholine and other cholinomimetic drugs interact are called cholinorecep-tors, while the receptors with which norepinephrine, epinephrine, or other adrenomimetic drugs combine are called adrenoceptors. It is common both in textbooks and the scientific literature to see these receptors re-ferred to as cholinergic or adrenergic receptors. This is improper usage of the terms cholinergic and adrenergic, since these terms should be applied only to nerves.

A number of other substances are released by sym-pathetic and parasympathetic neurons, often the same neurons that release norepinephrine or acetylcholine. These substances include adenosine triphosphate (ATP), neuropeptide Y, and substance P.