Roughly forty measurements have been listed here that are useful for monitoring testing efforts. Organizations should decide which are of the most value in terms of their current TMM level, and the monitoring and controlling goals they want to achieve.

Roughly forty measurements have been listed here that are useful for monitoring testing efforts. Organizations should decide which are of the most value in terms of their current TMM level, and the monitoring and controlling goals they want to achieve. The measurement selection process should begin with these goals, and compilation of a set of questions most likely to be asked by management relating to monitoring and controlling of the test process. The measurements that are selected should help to answer the questions (see brief discussion of the Goal/Question/Metric paradigm in Section 9.1). A sample set of questions is provided at the beginning of this chapter. Measurement-related data, and other useful test-related information such as test documents and problem reports, should be collected and organized by the testing staff. The test manager can then use these items for presentation and discussion at the periodic meetings used for project monitoring and controlling. These are called project status meetings. Test-specific status meetings can also serve to monitor testing efforts, to report test progress, and to identify any test-related problems. Testers can meet separately and use test measurement data and related documents to specifically discuss test status. Following this meeting they can then participate in the overall project status meeting, or they can attend the project meetings as an integral part of the project team and present and discuss test-oriented status data at that time. Each organization should decide how to organize and partition the meetings. Some deciding factors may be the size of the test and development teams, the nature of the project, and the scope of the testing effort. Another type of project-monitoring meeting is the milestone meeting that occurs when a milestone has been met. A milestone meeting is an important event; it is a mechanism for the project team to communicate with upper management and in some cases user/client groups. Major testing milestones should also precipitate such meetings to discuss accomplishments and problems that have occurred in meeting each test milestone, and to review activities for the next milestone phase. Testing staff, project managers, SQA staff, and upper managers should attend. In some cases process improvement group and client attendance is also useful.

Milestone meetings have a definite order of occurrence; they are held when each milestone is completed. How often the regular statues meetings are held depends on the type of project and the urgency to discuss issues. Rakos recommends a weekly schedule as best for small- to medium-sized projects . Typical test milestone meeting attendees are shown in Figure 9.4. It is important that all test- related information be available at the meeting, for example, measurement data, test designs, test logs, test incident reports, and the test plan itself.

Status meetings usually result in some type of status report published by the project manager that is distributed to upper management. Testmanagers should produce similar reports to inform management of test progress. Rakos recommends that the reports be brief and contain the following items :

•   Activities and accomplishments during the reporting period. All tasks that were attended to should be listed, as well as which are complete. The latter can be credited with earned value amounts. Progress made since the last reporting period should also be described.

Problems encountered since the last meeting period. The report should include a discussion of the types of new problems that have occurred, their probable causes, and how they impact on the project.Problem solutions should be described. 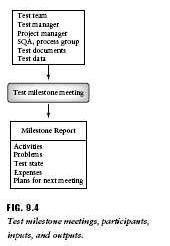 •   Problems solved. At previous reporting periods problems were reported that have now been solved. Those should be listed, as well as the solutions and the impact on the project.

•   Outstanding problems. These have been reported previously, but have not been solved to date. Report on any progress.

•  Current project (testing) state versus plan. This is where graphs using process measurement data play an important role. Examples will be described below. These plots show the current state of the project (testing) and trends over time.

•   Expenses versus budget. Plots and graphs are used to show budgeted versus actual expenses. Earned value charts and plots are especially useful here.

Figure 9.5 shows another graph based on defect data. The total number of faults found is plotted against weeks of testing effort. In this plot the number tapers off after several weeks of testing. The number of defects repaired is also plotted. It lags behind defect detection since the code must be returned to the developers who locate the defects and repair the code. In many cases this be a very time-consuming process. Managers can also include on a plot such as Figure 9.5 the expected rate of defect detection using data from similar past projects. However, even if the past data are typical there is no guarantee that the current software will behave in a similar way. Other ways of estimating the number of potential defects use rules of thumb (heuristics) such as ―0.5-1% of the total lines of code‖ [8]. These are at best guesses, and give managers a way to estimate the number of defects remaining in the code, and as a consequence how long the testing effort needs to continue. However, this heuristic gives no indication of the severity level of the defects. Hetzel gives additional examples of the types of plots that are useful for monitoring testing efforts [9]. These include plots of number of requirements tested versus weeks of effort and the number of statements not yet exercised over time. Other graphs especially useful for monitoring testing costs are those that plot staff hours versus time, both actual and planned. Earned value tables and graphs are also useful. Table 9.1 is an example. 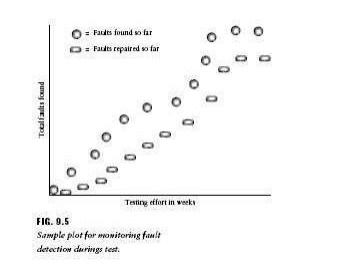 Note that the earned value table shown in Table 9.1 has two parti tions, one for planned values and one for actual values. Each testing task should be listed, as well as its estimated hours for completion. The total hours for all the tasks is determined and the estimated earned value for each task is then calculated based on its estimated percentage of the total time as described previously. This gives a relative value to each testing task with respect to the entire testing effort. The estimated earned values are accumulated in the next column. When the testing effort is in progress, the date and actual earned value for each task is listed, as well as the actual accumulated earned values. In status report graphs, earned value is usually plotted against time, and on the same graph budgeted expenses and actual expenses may also be plotted against time for comparison. Although actual expenses may be more than budget, if earned value is higher than expected, then progress may be considered satisfactory [4,5]. The agenda for a status meeting on testing includes a discussion of the work in progress since the last meeting period. Measurement data is presented, graphs are produced, and progress is evaluated. Test logs and incident reports may be examined to get a handle on the problems occurring.

If there are problem  areas  that need  attention, they are discussed

and solutions are suggested to get the testing effort back on track (control it). Problems currently occurring may be closely associated with risks identified by the test manager through the risk analysis done in test planning. Recall that part of the planner‘s job is identify and prioritize risks, and to develop contingency plans to handle the risk-prone events if they occur. If the test manager has done a careful job, these contingency plans may be applied to the problem at hand. Suggested and agreed-upon solutions should appear in the status report. The corrective actions should be put in place, their effect on testing monitored, and their success/failure discussed at the next status meeting. As testing progresses, status meeting attendees have to make decisions about whether to stop testing or to continue on with the testing efforts, perhaps developing additional tests as part of the continuation process. They need to evaluate the status of the current testing efforts as compared to the expected state specified in the test plan. In order to make a decision about whether testing is complete the test team should refer to the stoptest criteria included in the test plan (see the next section for a discussion on stop-test criteria). If they decide that the stop-test criteria have been met, then the final status report for testing, the test summary report, should be prepared. This is a summary of the testing efforts, and becomes a part of the project‘s historical database. At project postmortems the test summary report can be used to discuss successes and failures that occurred during testing. It is a good source for test lessons learned for each project.