Spurs (or) Groynes, (or) Spur Dike

SPURS (OR) GROYNES, (OR) SPUR DIKE

Also called groynes, spur, dikes, or transverse dikes. They constitute probably the most widely used training work. Spurs are the structures constructed on the river bank normal to the dominant flow direction or at an angle pointing upstream or downstream. A spur consists of a shank and a nose or head. Shank is bund of adequate section which connects the nose of the spur with the highest point above H.F.L. on the river bank. The upstream face and nose of the spur are duly armoured with stone pitching and apron of proper dimensions. The apron is built with stones in wire crates. The nose may have different angles and slopes to cater for local requirements. They can be used singly or in series spur ay not be enough and a number of groups may be required. The spacing, orientation and length of groynes are usually decided by model experiments.

Spurs serve one or more of the functions (i) Training the river along the desired course to reduce concentration of flow at the point of attack, guiding or deflecting the axis of flow, (ii) Creating a slack flow zone with the object of silting up the area in the vicinity of river bank. Silting up a minor stream in a meandering or a braiding river to open up a well defined channel so as to improve hydraulic efficiency of the river, (iii) Protecting an eroding bank by keeping the flow away from it, (iv) Contracting a wide river channel for establishing normal channel width usually for improving depth for navigation, (v) Promoting scour and sediment deposition, where desired, and (vi) Trapping bed load to build up new river banks.

(i) Spurs can protect a reach of river bank to the extent of 2 to 2.5 times their own length protruding inside the river. They thus have limited use in that they cannot protect long reaches of the river economically, (ii) Spurs upset the equilibrium of river, (iii) Many times river starts attacking other points, particularly the opposite bank, and calls for providing spurs on the opposite site, bank, and (iv) They require heavy repairs after every flood.

(i) Classification based on method and materials of construction

1. Permeable Spurs: These spurs permit passage of restricted flow. Because of partial obstruction to flow they promote deposition of sediment as the flow is retarded. They are built of materials like bellies, bamboos, timber, brush, steel or wire discussed hereinafter. They slow down the velocities over apportion of the channel area and thereby induce rapid deposition of sediment. Heavy silt laden river water when so retarded, drops much of its suspended load, bed load to come to rest, thereby building up new bank lines. This side contraction causes a larger proportion of the discharge to flow in the main channel, thus increasing its water and sediment transport capacity. They are best suited to deep and narrow river transporting heavy sediment loads. They are not suitable for small rivers flowing on steep gradients as also the deep rivers carrying light sediment loads.

(a) Tree Spur: Tree spur consists of a 25 mm diameter wire rope firmly anchored at one end to the river bank and tied at the other end to a heavy buoy or a concrete block. The length of stretched wire rope constitutes the length of tree spur. The entire leafy trees with abundant branches such as Babul are employed to increase sedimentation by retarding velocity of flow and intercepting sand and silt. A hole, about 0.3 m up the stem of each tree is drilled through which an iron ring is drawn and attached, either directly or by subsidiary pendant wire ropes, to the main rope. When trees become heavy with detritus they sink. Therefore, they are packed as closely as possible. Initially the spur is laid pointing upstream at an angle between 60Â o to 70Â o ,so that when it launches and becomes sandbound it assumes a position still facing slightly upstream.

Dip Trees Spur: Dip trees spur consists of entire bamboo trees with branches whose bottom is tied to a heavy concrete block or small crate full of stones by means of a hook. It is then launched in water. It keeps the tree at the launched position and sinks itself in whenever scour occurs. Rows of dip trees form the cross or longitudinal permeable spurs.

Tree spurs serve the object if (i) Diverting or deflecting the current directly threatening erosion of a bund, and (ii) To deaden the flow in one byeriver near the bund in order to open out another byeriver away from the bund, and (iii) to silt up a channel of the river at its source by checking the flow in it.

(c)  Pile Spur: The piles may be wooden balli, sheet pile or R.C.C. pile. They constitute the main verticals driven down 2.5 to 3 m about 6 to 9 m inside the river bed and in at least 2 to 3 similar rows. For ease in driving, the piles are tapered at the base and are fixed with heavy iron shoes. In between the main verticals, there can be two intermediates, embedded at least 1.25 m below the bed. Each row is closely interwined either with brushwood branches, going in and out around each vertical, or by horizontal railings. Every other main vertical of the rear row is strutted, the struts are embedded a minimum of 2.5 m below bed. Between two rows, the space is filled with brushwood branches in alternate layers of 1.75 m thick brushwood weighted by 0.6 m thick stones or sand bags. Being a permeable spur, the whole space is not filled with stones. The filling is closely packed and tamped. The bed is protected both at upstream and downstream of the spur and around the nose with a fascined mattress or a stone apron 1.0 m thick over a width of 3 m and 6 m along the shank and nose respectively.

(d)  Bamboo Cage Spur: Figure indicates typical cross section of bamboo cages flat bottomed permeable spurs constructed at NinanNurpur reach of river Hooghly. They were made of full and half split bamboo members, jointed with nails. Each cage consisted of 0.75 Â´0.75 m cubical boxes, top and bottom of which were covered with 1.75 Â´0.75 m sized lids and contained about 50

bricks. Each cage when dumped in groups covered about 1.70 m3 and remained about 50% permeable ensuring thereby fast construction. The interlocking between the cages increases their resistance to possible drifting and the spur is rendered gradually stable by deposition of silt. 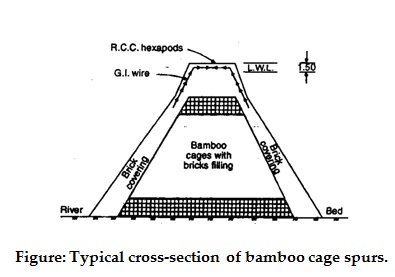 (e) Porcupines: Bamboo porcupines have been used in India to induce siltation along the river banks. These are made of 3 to 6 m long bamboos tied together at the centre in the form of a space angle and are weighted by tieing some stones to the centre. These add roughness to the channel in the over bank area and thereby deflect the eroding current away from the canal head regulator. In such a case, the water will be forced by the weir to flow towards the head regulator, and crosscurrent will develop. This function of the divide walls, is not fully established, and the most modern practice is only to constructsluicesâ€™thedividfr properâ€™. 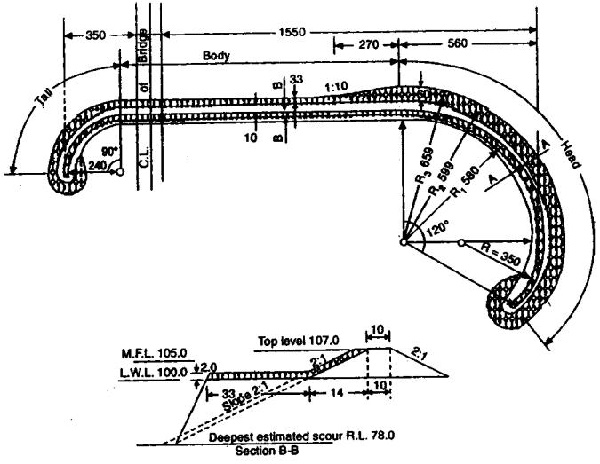 Design considerations: The divide walls can be designed as cantilever retaining walls subjected to silt pressure and water pressure from the undersluice side. For the worst case, the design should be checked for full silt pressure on the pocket side with equal water on two sides during low floods, and also for maximum differential water head, when full discharge is passing through the undersluices and no discharge is passing the weir. The value of differential pressure may be taken, arbitrarily, as 1.0 m for water head and about 2.0 m for silt pressure.

River training works are required near the weir site in order to ensure a smooth and an axial flow of water, and thus, to prevent the river from outflanking the works due to a change in its course. The river training works required on a canal headworks, are

The guide banks force the river into a restricted channel, and thus, ensuring a smooth and an almost axial flow near the weir site. The design and other details of the guide banks have already been discussed.

Marginal bunds are provided on the upstream side of the works in order to protect the area from submergence due to rise in HFL, caused by the afflux. These bunds are, therefore, continued till they join contours higher than the new HFL. Construction of these bunds would be justified only, when the value of land saved is more than the cost of the marginal bunds. In certain cases, when the ponding is high and the watershed is low, the construction of marginal bunds may almost become obligatory. The layout of the marginal bunds is very important in economizing the overall cost of the training works and subsequent cost of maintenance. Apart from their primary purpose of protecting the adjoining area from river spills caused by afflux, these bunds do help in partially controlling and guiding the river flow between the guide banks. For this reason, the length of the guide banks do depend on the layout of the marginal bunds.

Marginal bunds are nothing but earthen embankments, protected by groynes, wherever needed. They are designed on the principles of design of earthen dams or dikes. The design aspects of groynes have already been discussed.

Large rivers are generally inhabited by several types of fish, many of which are migratory. Such migratory type of fish, called anadromous fish, move from one part of the river to another part, according to the season. In India, only one such migratory fish is found, and this species is known as Hilsa. Salman, Steel head trout, etc. are the other species of such anadromous fish, found in other countries.

Generally speaking for India, these anadromous fish have been found to be moving from upstream (hills) to downstream (plains) in the beginning of the winter season in search of warmer waters, and return to their spawning grounds upstream, slightly before monsoons, in the month of May and June.