Home | | Human Neuroanatomy(Fundamental and Clinical) | Spinocerebellar Pathways - Tracts of Spinal Cord and Brainstem
Posted On :  23.07.2017 12:26 am

These pathways carry proprioceptive impulses arising in muscle spindles, Golgi tendon organs, and other receptors to the cerebellum.

These pathways carry proprioceptive impulses arising in muscle spindles, Golgi tendon organs, and other receptors to the cerebellum. They constitute the afferent component of reflex arcs involving the cerebellum, for control of posture. Recent investigations have shown that some exteroceptive sensations (e.g., touch) may reach the cerebellum through these pathways.

1.              The first order neurons of these pathways are located in dorsal nerve root ganglia. Their peripheral processes end in relation to muscle spindles, Golgi tendon organs and other proprioceptive receptors. Some fibres are related to end organs concerned with exteroceptive sensations (touch, pressure). The central processes of the neurons concerned ascend in the posterior funiculi for varying distances before ending in spinal grey matter. Some of them ascend all the way to the medulla and end in the accessory cuneate nucleus. 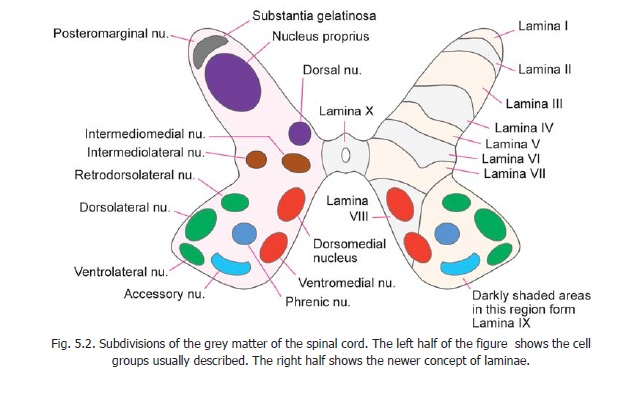 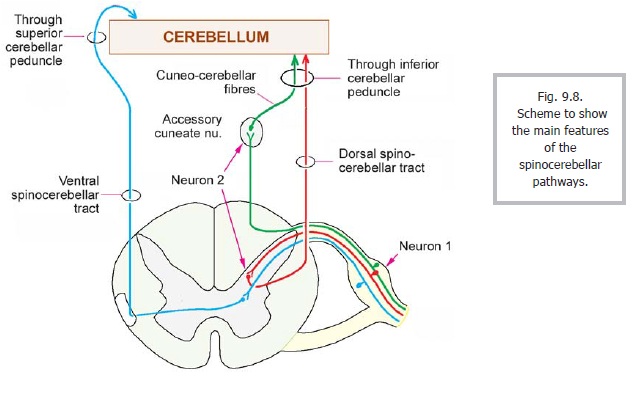 ii.                     The neurons giving origin to the ventral (anterior) spinocerebellar tract are probably located in the junctional area between the ventral and dorsal grey columns (laminae V, VI, VII) in the lumbar and sacral segments of the cord. Some of the neurons concerned may lie in the ventral grey column (spinal border cells). The fibres of this tract are predominantly crossed. They ascend in the lateral funiculus, anterior to the fibres of the dorsal spinocerebellar tract (Fig. 9.2), and pass through the medulla and pons. At the upper end of the pons the fibres turn downwards to enter the superior cerebellar peduncle through which they reach the vermis of the cerebellum (Fig. 9.8).From a functional point of view both the ventral and dorsal spinocerebellar tracts are concerned mainly with the lower limbs and trunk. The dorsal tract is believed to carry impulses concerned with fine co-ordination of muscles controlling posture, and with movements of individual muscles. On the other hand the ventral tract is concerned with movements of the limb as a whole. 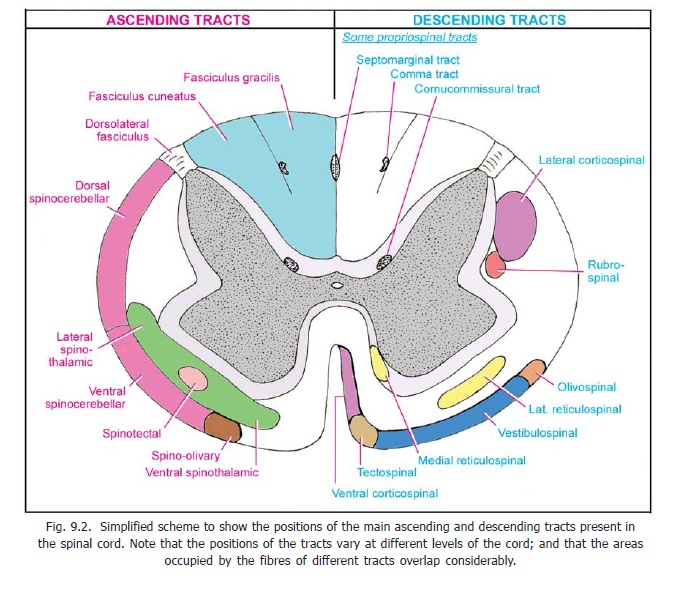 Spinocerebellar fibres reaching the cerebellum end as mossy fibres. Representation in the cerebellar cortex is somatotropic (i.e., fibres carrying sensations from different parts of the body end in definite areas of cortex). Conduction in the spinocerebellar tracts can be inhibited or facilitated under the influence of descending tracts (corticospinal, reticulospinal, rubrospinal).