Descending Tracts ending in the Brainstem

Descending Tracts ending in the Brainstem

The nuclei of cranial nerves that supply skeletal muscle (i.e., somatic efferent and special visceral efferent nuclei) are functionally equivalent to ventral horn cells of the spinal cord. They are under cortical control through fibres that are closely related in their origin and course to corticospinal fibres. At various levels of the brainstem these fibres cross to the opposite side to end by synapsing with cells in cranial nerve nuclei, either directly or through interneurons.

The cortico-ponto-cerebellar pathway forms the anatomical basis for control of cerebellar activity by the cerebral cortex.

Other fibres ending in the Brainstem

The cerebral cortex also exercises control on various masses of grey matter (other than cranial nerve nuclei and pontine nuclei) of the brainstem. Fibres from the cortex end in the red nucleus, the tectum, the substantia nigra, the inferior olivary nucleus (?), the interstitial nucleus and the reticular formation. These centres can also be influenced by the cortex indirectly through the striatum (caudate nucleus and putamen of lentiform nucleus) and the globus pallidus (Figs 9.4, 9.5). In turn these centres influence the spinal cord directly through tracts descending from them (rubrospinal, tectospinal, olivospinal, reticulospinal); and indirectly through the reticular formation and the reticulospinal tracts. These connections are often described as part of the extrapyramidal pathways referred to above. 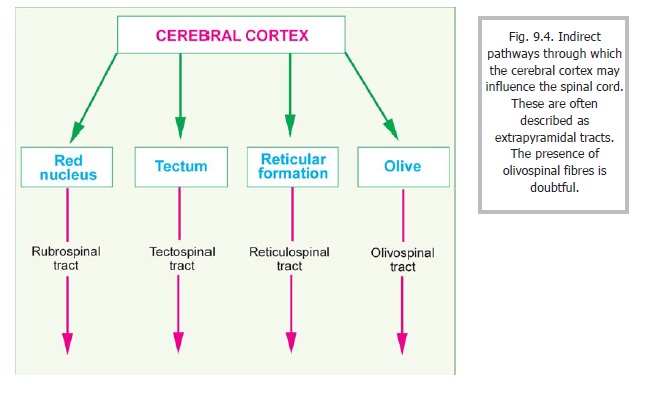 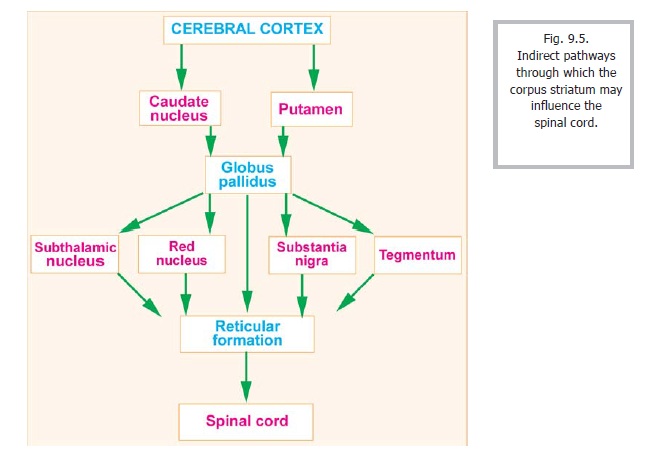