Although most rapidly acting nervous control of the cir-culation is effected through the autonomic nervous system, at least two conditions in which the skeletal nerves and muscles also play major roles in circulatory responses are the following.

Abdominal Compression Reflex. When a baroreceptor orchemoreceptor reflex is elicited, nerve signals are trans-mitted simultaneously through skeletal nerves to skele-tal muscles of the body, particularly to the abdominal muscles. This compresses all the venous reservoirs of the abdomen, helping to translocate blood out of the abdominal vascular reservoirs toward the heart. As a result, increased quantities of blood are made available for the heart to pump. This overall response is called the abdominal compression reflex. The resulting effect onthe circulation is the same as that caused by sympathetic vasoconstrictor impulses when they constrict the veins: an increase in both cardiac output and arterial pressure. The abdominal compression reflex is probably much more important than has been realized in the past because it is well known that people whose skeletal muscles have been paralyzed are considerably more prone to hypotensive episodes than are people with normal skeletal muscles.

IncreasedCardiacOutputandArterialPressureCausedby Skeletal Muscle Contraction During Exercise. When theskeletal muscles contract during exercise, they compress blood vessels throughout the body. Even anticipation of exercise tightens the muscles, thereby compressing the vessels in the muscles and in the abdomen. The resulting effect is to translocate blood from the periph-eral vessels into the heart and lungs and, therefore, to increase the cardiac output. This is an essential effect in helping to cause the fivefold to sevenfold increase in cardiac output that sometimes occurs in heavy exercise. The increase in cardiac output in turn is an essential ingredient in increasing the arterial pressure during exercise, an increase usually from a normal mean of 100 mm Hg up to 130 to 160 mm Hg.

Respiratory Waves in the Arterial Pressure

With each cycle of respiration, the arterial pressure usually rises and falls 4 to 6 mm Hg in a wavelike manner, causing respiratory waves in the arterial pres-sure. The waves result from several different effects, some of which are reflex in nature, as follows:

1.       Many of the “breathing signals” that arise in the respiratory center of the medulla “spill over” into the vasomotor center with each respiratory cycle.

2.       Every time a person inspires, the pressure in the thoracic cavity becomes more negative than usual, causing the blood vessels in the chest to expand. This reduces the quantity of blood returning to the left side of the heart and thereby momentarily decreases the cardiac output and arterial pressure.

3.     The pressure changes caused in the thoracic vessels by respiration can excite vascular and atrial stretchreceptors.

Often while recording arterial pressure from an animal, in addition to the small pressure waves caused by res-piration, some much larger waves are also noted—as great as 10 to 40 mm Hg at times—that rise and fall more slowly than the respiratory waves. The duration of each cycle varies from 26 seconds in the anesthetized dog to 7 to 10 seconds in the unanesthetized human. These waves are called vasomotor waves or “Mayer waves.” Such records are demonstrated in Figure 18–11, showing the cyclical rise and fall in arterial pressure. 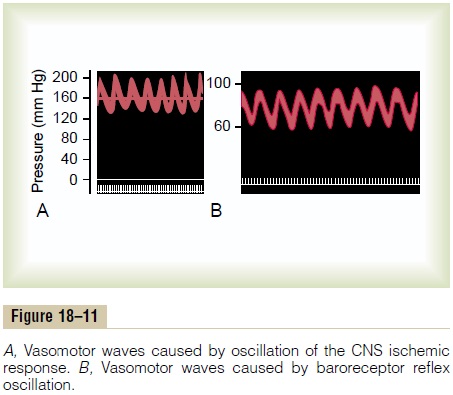 The cause of vasomotor waves is “reflex oscillation” of one or more nervous pressure control mechanisms, some of which are the following.

Oscillation  of  the  Baroreceptor  and  Chemoreceptor  Reflexes.

The vasomotor waves of Figure 18–11B are often seen in experimental pressure recordings, although usually much less intense than shown in the figure. They are caused mainly by oscillation of thebaroreceptor reflex. That is, a high pressure excites the baroreceptors; this then inhibits the sympathetic nervous system and lowers the pressure a few seconds later.

The decreased pressure in turn reduces the baroreceptor stimulation and allows the vasomotor center to become active once again, elevating the pressure to a high value. The response is not instantaneous, and it is delayed until a few seconds later. This high pressure then initiates another cycle, and the oscillation continues on and on.

Oscillation of the CNS Ischemic Response. The record inFigure 18–11A resulted from oscillation of the CNS ischemic pressure control mechanism. In this experi-ment, the cerebrospinal fluid pressure was raised to 160 mm Hg, which compressed the cerebral vessels and initiated a CNS ischemic pressure response up to 200 mm Hg. When the arterial pressure rose to such a high value, the brain ischemia was relieved and the sym-pathetic nervous system became inactive. As a result, the arterial pressure fell rapidly back to a much lower value, causing brain ischemia once again. The ischemia then initiated another rise in pressure. Again the ischemia was relieved and again the pressure fell. This repeated itself cyclically as long as the cerebrospinal fluid pressure remained elevated.

Thus, any reflex pressure control mechanism can oscillate if the intensity of “feedback” is strong enough and if there is a delay between excitation of the pres-sure receptor and the subsequent pressure response. The vasomotor waves are of considerable theoretical importance because they show that the nervous reflexes that control arterial pressure obey the same principles as those applicable to mechanical and electrical control systems. For instance, if the feedback “gain” is too great in the guiding mechanism of an automatic pilot for an airplane and there is also delay in response time of the guiding mechanism, the plane will oscillate from side to side instead of following a straight course.