Nervous Regulation of the Circulation

Nervous Regulation of the Circulation

Adjustment of blood flow tissue by tissue is mainly the function of local tissue blood flow control mechanisms. We shall see that nervous control of the circula-tion has more global functions, such as redistribut- ing blood flow to different areas of the body, increasing or decreasing pumping activity by the heart, and, especially, providing very rapid control of systemic arterial pressure.

The nervous system controls the circulation almost entirely through the auto-nomic nervous system. For our present discus-sion, we need to present still other specific anatomical and functional charac-teristics, as follows.

Sympathetic Nervous System. Figure 18–1 shows the anatomy of sympatheticnervous control of the circulation. Sympathetic vasomotor nerve fibers leave the spinal cord through all the thoracic spinal nerves and through the first one or two lumbar spinal nerves. They then pass immediately into a sympatheticchain, one of which lies on each side of the vertebral column. Next, they passby two routes to the circulation: (1) through specific sympathetic nerves that innervate mainly the vasculature of the internal viscera and the heart, as shown on the right side of Figure 18–1, and (2) almost immediately into peripheral por-tions of the spinal nerves distributed to the vasculature of the peripheral areas. 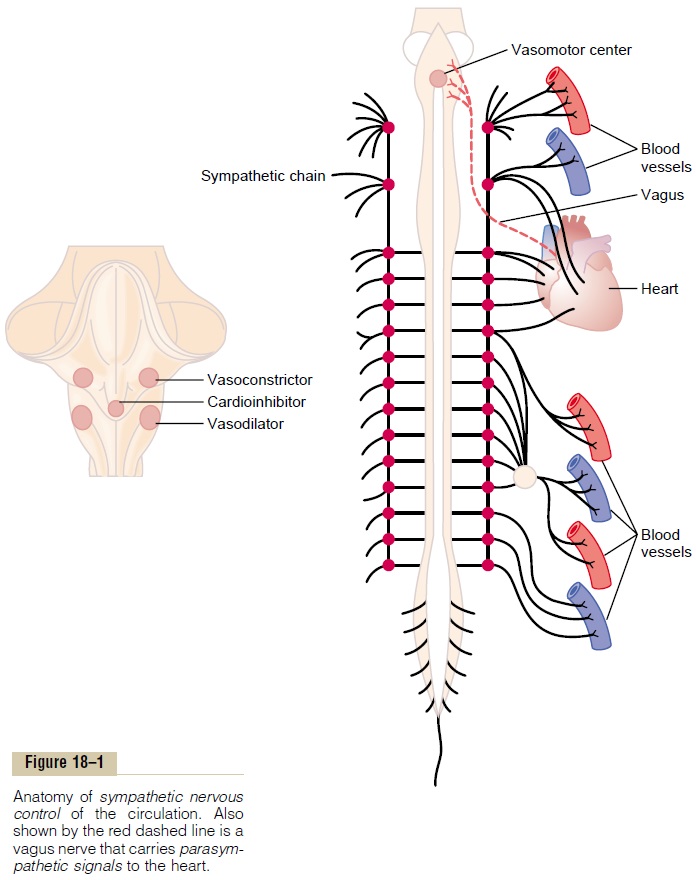 Sympathetic Innervation of the Blood Vessels. Figure 18–2 shows distributionof sympathetic nerve fibers to the blood vessels, demonstrating that in most tissues all the vessels except the capillaries, precapillary sphincters, and metar-terioles are innervated

The innervation of the small arteries and arterioles allows sympathetic stim-ulation to increase resistance to blood flow and thereby to decrease rate of blood flow through the tissues. 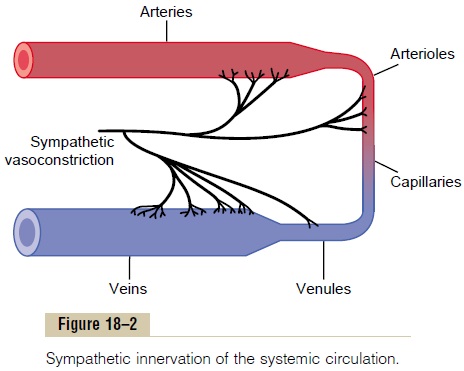 The innervation of the large vessels, particularly of the veins, makes it possi-ble for sympathetic stimulation to decrease the volume of these vessels. This can push blood into the heart and thereby play a major role in regulation of heart pumping.

Sympathetic Nerve Fibers to the Heart. In addition tosympathetic nerve fibers supplying the blood vessels, sympathetic fibers also go directly to the heart, as shown in Figure 18–1.. It should be recalled that sympathetic stimulation markedly increases the activity of the heart, both increasing the heart rate and enhancing its strength and volume of pumping.

Parasympathetic Control of Heart Function, Especially Heart Rate. Although the parasympathetic nervous system isexceedingly important for many other autonomic functions of the body, such as control of multiple gas-trointestinal actions, it plays only a minor role in regulation of the circulation. Its most important circu-latory effect is to control heart rate by way of parasym-pathetic nerve fibers to the heart in the vagus nerves, shown in Figure 18–1 by the dashed red linefrom the brain medulla directly to the heart.

Sympathetic Vasoconstrictor System and Its Control by the Central Nervous System

The sympathetic nerves carry tremendous numbers of vasoconstrictor nerve fibers and only a few vasodilatorfibers. The vasoconstrictor fibers are distributed to essentially all segments of the circulation, but more to some tissues than others. This sympathetic vasocon-strictor effect is especially powerful in the kidneys, intestines, spleen, and skin but much less potent in skeletal muscle and the brain.

Vasomotor Center in the Brain and Its Control of the Vasocon-strictor System. Located bilaterally mainly in the retic-ular substance of the medulla and of the lower third of the pons, shown in Figures 18–1 and 18–3, is an area called the vasomotor center. This center transmits parasympathetic impulses through the vagus nerves to the heart and transmits sympathetic impulses through the spinal cord and peripheral sympathetic nerves to virtually all arteries, arterioles, and veins of the body.

Although the total organization of the vasomotor center is still unclear, experiments have made it possible to identify certain important areas in this center, as follows:

1.        A vasoconstrictor area located bilaterally in the anterolateral portions of the upper medulla. The neurons originating in this area distribute their fibers to all levels of the spinal cord, where they excite preganglionic vasoconstrictor neurons of the sympathetic nervous system.

3.      A sensory area located bilaterally in the tractussolitarius in the posterolateral portions of themedulla and lower pons. The neurons of this area receive sensory nerve signals from the circulatory system mainly through the vagus and glossopharyngeal nerves, and output signals fromthis sensory area then help to control activities of both the vasoconstrictor and vasodilator areas of the vasomotor center, thus providing “reflex” control of many circulatory functions. An example is the baroreceptor reflex for controlling arterial pressure.

Continuous Partial Constriction of the Blood Vessels Is Nor-mally Caused by Sympathetic Vasoconstrictor Tone. Undernormal conditions, the vasoconstrictor area of the vasomotor center transmits signals continuously to the sympathetic vasoconstrictor nerve fibers over the entire body, causing continuous slow firing of these fibers at a rate of about one half to two impulses per second. This continual firing is called sympathetic vaso-constrictor tone. These impulses normally maintain apartial state of contraction in the blood vessels, called vasomotor tone.

Figure 18–4 demonstrates the significance of vaso-constrictor tone. In the experiment of this figure, total spinal anesthesia was administered to an animal. This blocked all transmission of sympathetic nerve impulses from the spinal cord to the periphery. As a result, the arterial pressure fell from 100 to 50 mm Hg, demonstrating the effect of losing vasoconstrictor tone throughout the body. A few minutes later, a small amount of the hormone norepinephrine was injected into the blood (norepinephrine is the principal vasoconstrictor hormonal substance secreted at the endings of the sympathetic vasoconstrictor nerve fibers throughout the body). As this injected hormone was transported in the blood to all blood vessels, the vessels once again became constricted, and the arterial pressure rose to a level even greater than normal for 1 to 3 minutes, until the norepinephrine was destroyed. 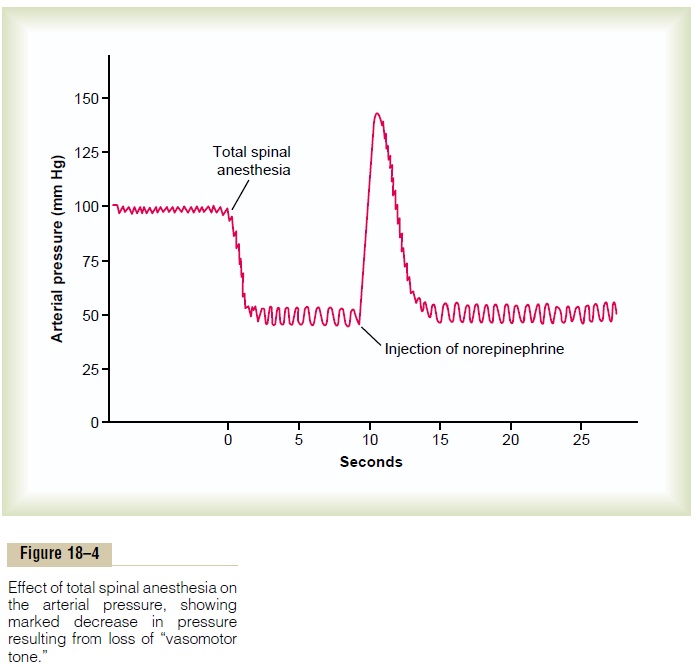 Control of Heart Activity by the Vasomotor Center. At thesame time that the vasomotor center is controlling the amount of vascular constriction, it also controls heart activity. The lateral portions of the vasomotor center transmit excitatory impulses through the sympathetic nerve fibers to the heart when there is need to increase heart rate and contractility.

Conversely, when there is need to decrease heart pumping, themedial portion of the vasomotor center sends signals to the adjacent dorsal motor nuclei of the vagus nerves, which thentransmit parasympathetic impulses through the vagus nerves to the heart to decrease heart rate and heart contractility. Therefore, the vasomotor center can either increase or decrease heart activity. Heart rate and strength of heart contraction ordinarily increase when vasoconstriction occurs and ordinarily decrease when vasoconstriction is inhibited.

Control of the Vasomotor Center by Higher Nervous Centers. 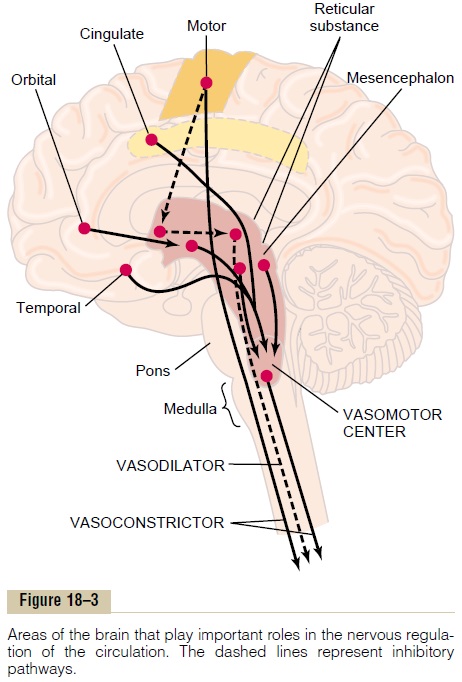 The hypothalamus plays a special role in controlling the vasoconstrictor system because it can exert either powerful excitatory or inhibitory effects on the vaso-motor center. The posterolateral portions of the hypo-thalamus cause mainly excitation, whereas the anteriorportion can cause either mild excitation or inhibition,depending on the precise part of the anterior hypo-thalamus stimulated.

Also, stimulation of the anterior temporal lobe, the orbital areas of the frontal cortex, the anterior part of the cingulate gyrus, the amygdala, the septum, and the hippocampus can all either excite or inhibit the vaso-motor center, depending on the precise portions of these areas that are stimulated and on the intensity of stimulus. Thus, widespread basal areas of the brain can have profound effects on cardiovascular function.

Adrenal Medullae and Their Relation to the Sympathetic Vaso-constrictor System. Sympathetic impulses are transmit-ted to the adrenal medullae at the same time that they are transmitted to the blood vessels. They cause the medullae to secrete both epinephrine and norepineph-rine into the circulating blood. These two hormones arecarried in the blood stream to all parts of the body, where they act directly on all blood vessels, usually to cause vasoconstriction, but in an occasional tissue epinephrine causes vasodilation because it also has a “beta” adrenergic receptor stimulatory effect, which dilates rather than constricts certain vessels.

Sympathetic Vasodilator System and its Control by the Central Nervous System. The sympathetic nerves to skeletalmuscles carry sympathetic vasodilator fibers as well as constrictor fibers. In lower animals such as the cat, these dilator fibers release acetylcholine, not norepinephrine, at their endings, although in primates, the vasodilator effect is believed to be caused by epinephrine exciting specific beta adrenergic receptors in the muscle vasculature.

The pathway for central nervous system control of the vasodilator system is shown by the dashed lines in Figure 18–3. The principal area of the brain controlling this system is the anterior hypothalamus.

Possible Unimportance of the Sympathetic Vasodilator System. It is doubtful that the sympathetic vasodilator system plays an important role in the control of the circulation in the human being because complete block of the sym-pathetic nerves to the muscles hardly affects the ability of these muscles to control their own blood flow in response to their needs. Yet some experiments suggest that at the onset of exercise, the sympathetic vasodila-tor system might cause initial vasodilation in skeletal muscles to allow anticipatory increase in blood flow even before the muscles require increased nutrients.

Emotional Fainting—Vasovagal Syncope. A particularlyinteresting vasodilatory reaction occurs in people who experience intense emotional disturbances that cause fainting. In this case, the muscle vasodilator system becomes activated, and at the same time, the vagal car-dioinhibitory center transmits strong signals to the heart to slow the heart rate markedly. The arterial pressure falls rapidly, which reduces blood flow to the brain and causes the person to lose consciousness. This overall effect is called vasovagal syncope. Emotional fainting begins with disturbing thoughts in the cerebral cortex. The pathway probably then goes to the vasodilatory center of the anterior hypothalamus next to the vagal centers of the medulla, to the heart through the vagus nerves, and also through the spinal cord to thesympa-thetic vasodilator nerves of the muscles.