Most nervous control of blood pressure is achieved by reflexes that originate in the baroreceptors, the chemoreceptors, and the low-pressure receptors, all of which are located in the peripheral circulation outside the brain. However, when blood flow to the vasomotor center in the lower brain stem becomes decreased severely enough to cause nutritional deficiency—that is, to cause cerebral ischemia—the vasoconstrictor and cardioaccelerator neurons in the vasomotor center respond directly to the ischemia and become strongly excited. When this occurs, the systemic arterial pressure often rises to a level as high as the heart can possibly pump. This effect is believed to be caused by failure of the slowly flowing blood to carry carbon dioxide away from the brain stem vasomotor center: at low levels of blood flow to the vasomotor center, the local con-centration of carbon dioxide increases greatly and has an extremely potent effect in stimulating the sym-pathetic vasomotor nervous control areas in the brain’s medulla.

The magnitude of the ischemic effect on vasomotor activity is tremendous: it can elevate the mean arterial pressure for as long as 10 minutes sometimes to as high as 250 mm Hg. The degree of sympathetic vasoconstric-tion caused by intense cerebral ischemia is often so great that some of the peripheral vessels become totally or almost totally occluded.

The kidneys, for instance, often entirely cease their production of urine because of renal arteriolar constriction in response to the sympathetic discharge. Therefore, the CNS ischemic response is oneof the most powerful of all the activators of the sympa-thetic vasoconstrictor system.

Importance of the CNS Ischemic Response as a Regulator of Arte- rial Pressure. Despite the powerful nature of the CNSischemic response, it does not become significant until the arterial pressure falls far below normal, down to 60 mm Hg and below, reaching its greatest degree of stimulation at a pressure of 15 to 20 mm Hg. Therefore, it is not one of the normal mechanisms for regulating arterial pressure. Instead, it operates principally as an emergency pressure control system that acts rapidly and very powerfully to prevent further decrease in arterial pressure whenever blood flow to the brain decreases dan-gerously close to the lethal level. It is sometimes calledthe “last ditch stand” pressure control mechanism. 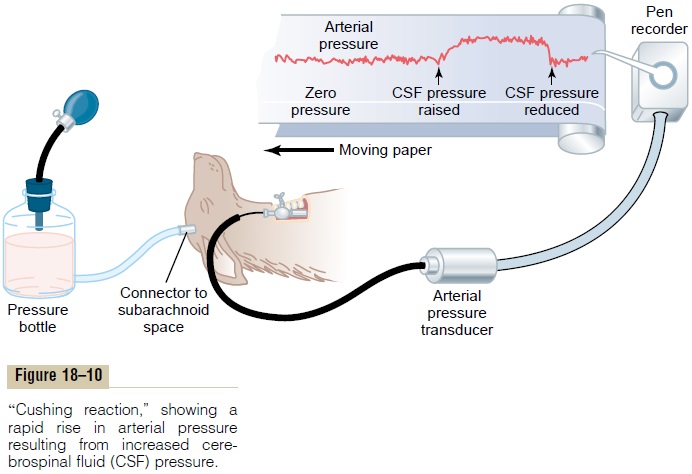