E. Imagine that below are some of the paintings of Jane Eyre. Discuss with your partner and describe the paintings. F. Put students into groups of three and let them act as Jane.

E. Imagine that below are some of the paintings of Jane Eyre. Discuss with your partner and describe the paintings. 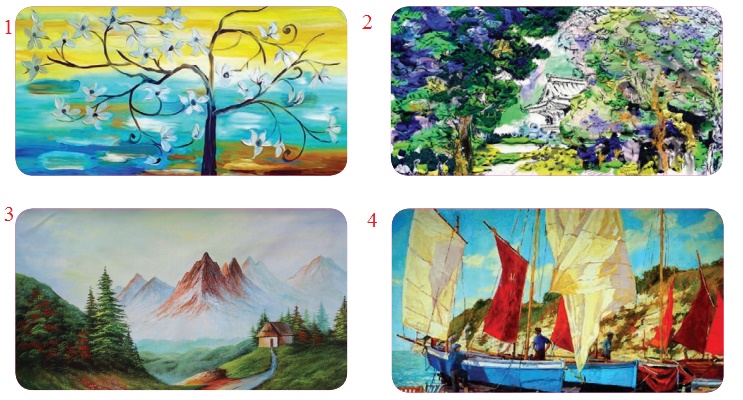 1. This painting of a tree with white flowers looks beautiful. The colours used to paint it is fantastic. When we look at it, we feel joy in her hearts.

2. This painting of greenery everywhere with colourful flowers looks beautiful. The scenery with some trees and a lonely house between the trees looks amazing.

3. This painting of snow-covered mountains with a but on top of a raised area is fantastic. It has some pine trees and a path leading to the hut.

4. This painting shows clearly a huge boat with some fishermen getting ready to go to the sea. The blue boat with colourful sails looks like a real photograph.

F. Put students into groups of three and let them act as Jane.

Student A: You are Jane. You live with the Reeds. Tell the other students about your life there.

Student B: You are Jane. You have been at Lowood School for a few months. Tell the other students about your life there.

Student C: You are Jane. You are eighteen. You are going to work at Thornfield Hall as a teacher. Tell the other students about your hopes for your life.

After this, decide who is the unhappiest of the three ‘Janes’.

Student 1 : I am Jane. As my parents died, I had to live with my uncle and aunt Mr. and Mrs. Reed in a town called Gateshead. My three cousins Eliza, John and Georgiana ill-treated me. After my uncle's death, my aunt did not look after me as her daughter. She always locked me up in a red room. Besides, the maid had to listen to my aunt and did, as was told by her. My aunt wrote a letter to Mr. Brocklehurst and sent me to Lowood.

Student 2 : At Lowood, I met Miss. Muller and Miss. Temple. They put me in the fourth form. There, I got a new companion Helen Burns, who told me that their school was a charity school for the orphans. But after some time, Helen got ill and passed away leaving me alone in Lowood. I spent eight years in school - six years as a student and two years as a teacher. I wanted liberty. So I advertised in Herald for situations. A week later, I received a letter from Mrs. Fairfax, Thornfield, for a job.

Student 3 : There, at Thornfield, I was asked to teach Miss. Adela. She was Mr. Rochester's ward. I liked Thornfield very much. I told Adela that I would teach her about nature, animals and flowers. We can study all we can that isn't in books. I believe that art is the window of the soul. So I started teaching Adela and led a new life in Thornfield.

After this, decide who is the unhappiest of the three ‘Janes’.

Answer: The unhappiest of the three 'Janes': 'Jane' who lived with Mrs. Reed, at Gateshead.