Once upon a time a daughter complained to her father that her life was miserable and that she didn’t know how she was going to make it. She was tired of fighting and struggling all the time. It seemed that just as one problem was solved, another one soon followed. Her father, a chef, took her to the kitchen. He filled three pots with water and placed each on high flame. Once the three pots began to boil, he placed potatoes in one pot, eggs in the second pot, and ground coffee beans in the third pot. He then let them boil, without saying a word to his daughter. The daughter moaned and impatiently waited, wondering what he was doing.

After twenty minutes he turned off the burners. He took the potatoes out of the pot and placed them in a bowl. He pulled the boiled eggs out and placed them in a bowl. He then ladled the coffee out and poured it in a cup. Turning to her he asked. “Daughter, what do you see?” “Potatoes, eggs, and coffee,” she hastily replied, “Look closer,” he said, “and touch the potatoes.” She did and noted that they were soft. He then asked her to take an egg and break it. After peeling off the shell, she observed the hard-boiled egg.

Finally, he asked her to sip the coffee. Its rich aroma brought a smile to her face. “Father, what does this mean?” she asked. He then explained that the potatoes, the eggs and coffee beans had each faced the same adversity – the boiling water. However, each one reacted differently. The potato was strong, hard, and unrelenting, but in boiling water, it became soft and weak. The egg was fragile, with the thin outer shell protecting its liquid interior until it was put in the boiling water. Then the inside of the eggs became hard. However, the ground coffee beans were unique.

After they were exposed to the boiling water, they changed the water and created something new. “Which are you?” he asked his daughter. “When adversity knocks on your door, how do you respond? Are you a potato, an egg, or a coffee bean? Things happen around us, things happen to us, but the only thing that truly matters is what happens within us. Which one are you?"

This story shows how people react to different situations in life. Some become weak and soft like the potatoes and some others harden like the egg. The best way to face difficulties is illustrated by the coffee beans which change their colour and add flavour.

Now use these ideas and prepare a speech on the topic ‘The importance of developing a positive attitude’ and deliver the speech in the school assembly. 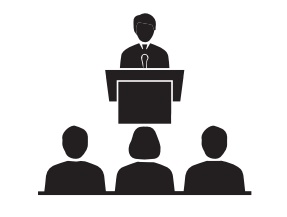 I feel privileged to stand before you to share my views and opinions on ‘The Importance of developing a positive attitude’ ‘Attitudes lead to altitudes.’ This wise saying motivates all of us to be positive towards life. There are ups and downs in life. It depends how we face them. Worries, anxieties and failures are common to every soul on this earth. In spite of that, we take them as challenges whereas some of us get stuck. Those who take as challenges win over them, but others start hurling curses at their life and the circumstances. Now, what is positive attitude? It’s an optimistic outlook to people and surroundings. People of positive thinking are happy, constructive, creative, optimistic, approachable and successful in their endeavours. They can never be cowed down by vile persons or adverse incidents. They transform adversities into achievements.

In the given story, the adversity of hot water was same for potatoes, eggs and coffee. But the difference lies in their reaction to it. Similarly, we may have to face many trials and temptations in course of time. But we must be prepared to face them intelligently. This prudence makes our life interesting, exciting, enjoyable or worthwhile. Research has proved that this bend of mind ensures good health and long life.

So, let us all be down-to-earth so that we may be practical, realistic and sensible to reality. Let’s complement the god-given life with our positive attitude. Let’s all grow with positive attitude and see the greener side of life. Positive attitude is fast spreading and persons of positive attitude vibrate the people around them. You and I can be one among them, I suppose. Good luck