The underlined words in the following sentences from the text are the examples of prepositions.

1. If you look up ‘tea’ in the first cookery book,

2. Fifthly, the tea should be put straight into the pot.

A preposition is a word or a phrase that is used to show the relationship between a noun and another noun. 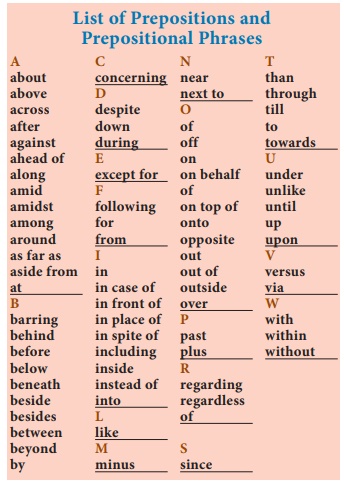 Here are a few prepositions which cause confusion. The examples illustrate the correct usage.

above → when one thing is not directly over the other

over → for horizontal movement at a higher level

below → ‘Below’ is the opposite of ‘above’

under → ‘under’ is the opposite of ‘over’; for horizontal movement at a lower level

along → for following a line of specific movement

between → used for two nouns/adverbials, when there is ‘and’ in the sentence

·           There was amity between Jessie Owens and Luz Long in the Berlin Olympics.

among → used for more than two nouns, when there is the use of ‘and’ in the sentence

·           There was a healthy discussion about communal harmony among Ramesh, Abdul and John.

Recall your learning of basic prepositions and complete the sentences using the prepositions given in brackets.

d)       My friend will meet me with his brother tomorrow.

g)        A trekker climbed over a mountain meticulously.

h)       There was a skirmish between my brother and sister.

i)          The laudable thoughts were apparent among many scholars in a conference.

Complete the following passages using the prepositions given in brackets.

i) When Lakshmi was (1) at school, she practised music from Monday (2) to Friday. She involved herself (3) in the school orchestra. She was responsible (4) for conducting many programmes. She was very popular (5) among her schoolmates, as she was kind, friendly and helpful.

ii) (1)Before the interview, Solomon was confident (2) of getting the job. He knew that he was qualified (3) for the job. He was interested (4) in discharging his duty perfectly. The interview panel was impressed (5) with his attitude and skills. So (6) after the interview, he was (7) on cloud nine.

A prepositional phrase is made up of a preposition and a noun phrase.

Underline the prepositional phrases. The first two examples have been done for you.

a)        With reference to your advertisement in a local newspaper, I am applying for the post of a salesman.

b)       The assignment will be completed in a few weeks.

Fill in the blanks with suitable prepositional phrase given in brackets.

(in favour of, in case of, according to, on the whole, on account of, on behalf of, in spite of, instead of)

a) Instead of Kiran, Rajesh may attend a programme.

b) Many tourists visited Ooty inspite of heavy rains.

c) Expressing gratitude on behalf of others is common in a vote of thanks.

d) On the whole, I had a happy childhood.

e) Our teacher always acts in favour her students.

f) On account of  his laziness, the  boy remained passive for a long time.

h) In case of rain, take an umbrella.

Coordinating conjunctions are used in compound sentences. They help in joining sentences and independent clauses of equal rank. 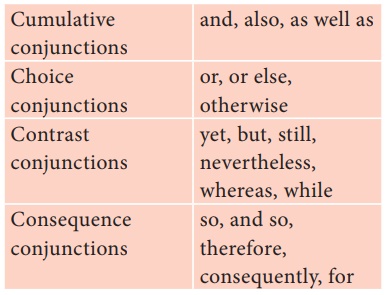 Subordinating conjunctions are words that join two clauses, one being sub ordinate to the other. They are used to join complex sentences. 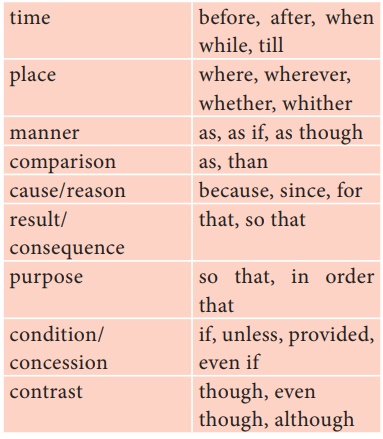 Correlative conjunctions are words that are always used in pairs to join sentences.

Connectives are words that join or link ideas in a sentence. They can also be used to connect ideas together in separate sentences and to link ideas between paragraphs.

Connectives help in facilitating the flow of language in construction of proper structures while writing or speaking. They help to connect ideas so as to smoothly link one point or a paragraph to the next to make our writing or speaking more powerful. 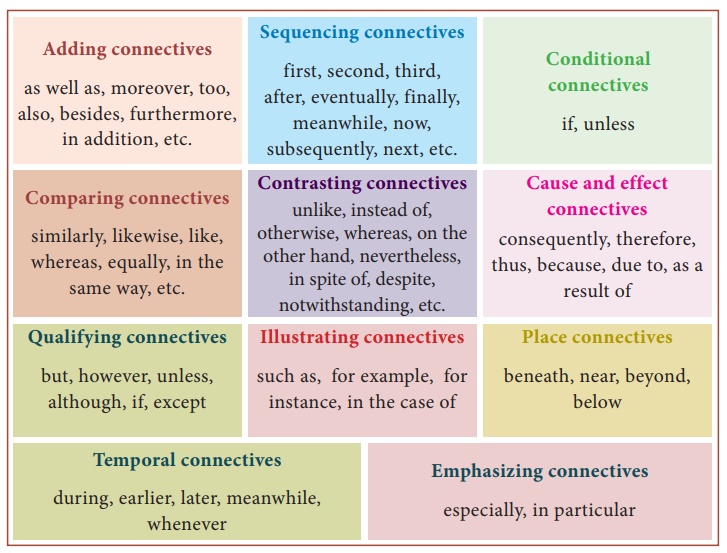 Choose the appropriate linker from within the brackets and complete the sentences.

a) I could not complete my paper in the examination _________ (because, but) I was slow in answering the questions.

i) (If/Unless) _________ you register your name, you cannot participate in the competitions.

Combine the sentences and rewrite them using the words given in the brackets.

The fox could not get out of the well, because the well was deep.

When the work was over, we went home.

A library is a public place, where we see a number of books kept for reading.

d)       The culprit was caught. Immediately, he was taken to the police station. (as soon as)

As soon as the culprit was caught, he was taken to the police station.

e)        The boys were stealing mangoes from a grove. At that time, the owner of the grove came in.(while)

While the boys were stealing mangoes from a grove the owner of the grove came in.

f)         Artificially flavoured juices are hazardous to health. Moreover, they lead to kidney problems. (and)

Artificially flavoured juices are hazardous to health and they lead to kidney problems.

Adit as well as Ranjan has been promoted.

h)       Caesar was declared emperor. The conspirators killed him. (After)

After caesar was declared emperor, the conspirators killed him.

Fill in the blanks with appropriate correlative conjunctions.

a)        She is such an understanding person that everybody likes to be with her.

d)       Amit did not know whether his father met his class teacher or not .